Film Review: I Wanna Dance With Somebody; Houston, we have a problem! 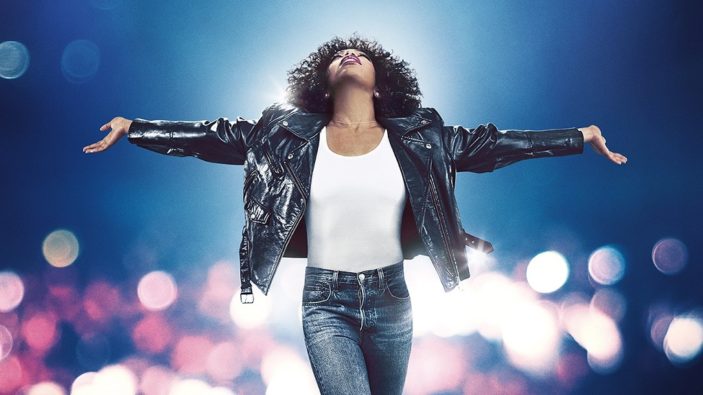 Much like a Greatest Hits package where it’s all the beats that both fans and the casual listener are familiar with, I Wanna Dance With Somebody, a glossy biopic about “The Voice”, Whitney Houston, Kasi Lemmons‘ film refuses to delve beyond a catchy hook.  There’s no bridge, no worthy duets, and no deep-rooted B-side.

And that’s with a near-150 minute running time.

Playing out with an alarming more family-friendly mentality, Lemmons and screenwriter Anthony McCarten (whose credit on the neutered Queen biopic Bohemian Rhapsody might give you all the warning you need) let I Wanna Dance With Somebody ebb and flow with all the subtlety and finesse of a Lifetime movie, recreating some of the singer’s most iconic moments (the “It’s Not Right But It’s Okay” video, the national anthem at the Super Bowl XXV, and the showstopping 1994 American Music Awards medley included) but failing to connect each of them with a story of any dramatic weight.

And it’s a real shame for a multitude of reasons, because 1, Houston had an incredibly interesting and increasingly troubled life, and 2, Naomi Ackie is actually quite great in the lead, taking on the pressure of embodying such a figure with a grace that McCarten’s script continually undermines; a script, mind you, approved by the Houston estate, which is probably why the film is so soft on her.

By no means would I want I Wanna Dance With Somebody to taint the legacy of Houston by implying negativity on her character, but it was no secret that her union with Bobby Brown (here cartoonishly played by Ashton Sanders) was doused in volatility, that she had a sexual relationship of sorts with a woman (Nafessa Williams as Robyn Crawford), and that she developed a hard drug habit that led to rehab stints, notorious tour performances and, ultimately, her tragic end; Houston died at the age of 48 in February, 2012.  But in the hands of McCarten and Lemmons, these are all surface-level scratchings that get lost in a jumble of questionable editing, where characters are either introduced and dismissed without any explanation or disappear for extended stretches; Tamara Tunie as Whitney’s mother, Cissy Houston, seemingly losing many of her on-screen minutes in the middle of the film, before re-appearing with what appears to be a cane and a broken leg that asks more questions than the film can answer.

Much like Bohemian Rhapsody, McCarten’s script sets the scene with, arguably, the performance of Houston’s career.  The aforementioned 1994 American Music Awards medley, where she sang a trio of impossible belt-worthy songs (“I Loves You, Porgy”, “And I Am Telling You I’m Not Going” and “I Have Nothing”), opens and closes the film, springing to mind his deceptive tactic with Rhapsody where the 1985 Live Aid set was recreated and fooled audiences into believing they watched an entire film of worth in the process.  The film rewinds back some 11 years to a choir-singing Whitney, whose evident talent and penchant for vocal riffs don’t always sit right with her more traditionally-trained mother.  Of course, this being a film that doesn’t want to truly explain the how’s and why’s, it’s only about 15 minutes later that she’s inking a record deal with legendary music producer Clive Davis (Stanley Tucci, elevating his role with a certain warmth) and topping the charts with signature tunes like “How Will I Know” and, of course, “I Wanna Dance With Somebody”.

The ease at which her success comes (the nepotism here is real), the ordeal she faced from the black community regarding her “white” music and her fertility struggles are all comically glazed over here, furthering the film’s vanilla injection; even the quite tender rebranding of the titular song being favoured by the singer for its queer connotations of not being able to dance with the one person she truly wants to feels like an exploration the film is too afraid to explore.

Crowd-pleasing to an absolute fault, I Wanna Dance With Somebody treats Whitney Houston with respect (the telegraphing of her final moments are handled with a legitimate grace) but, in doing so, voids itself of the grit and the depth that would make her story all the more investing.  She’s an artist undoubtedly worthy of being celebrated, but this film takes that temperament far too literally and fails to make her a wholly rounded person beyond accolades and career highlights.  If you truly wanna dance with Houston, I’d suggest Kevin Macdonald’s 2018 documentary Whitney and a YouTube playlist of her catalogue.

I Wanna Dance With Somebody is screening in Australian theatres from Boxing Day, December 26th, 2022.