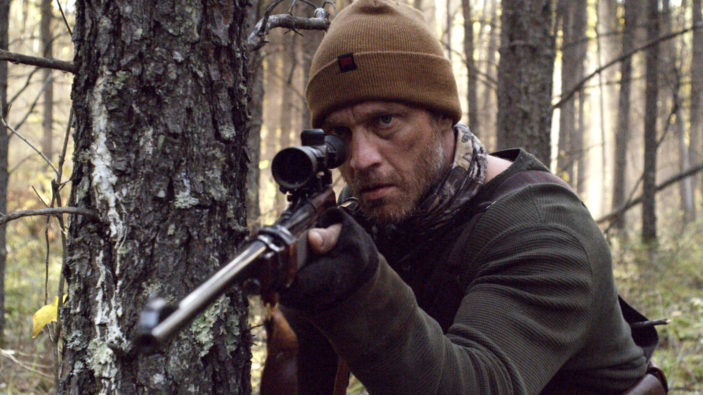 It goes without saying that the ending of a film is as crucial to its success as any other major component.  And in horror films especially, the satisfaction element of its climax is one the genre often lives or dies by.  Hunter Hunter, from writer/director Shawn Linden, is such a film that almost relies entirely on its final moments – the coda more than earning the R18+ rating its been classified here with – but is also intelligent enough to not be overpowered by it either.

It’s undoubtedly Linden’s intention for the final moments of Hunter Hunter to be all audiences talk about, but a jaw-dropping ending isn’t worth the wait if the journey to get there isn’t just as investing, so it’s thankful that the 85-or-so minutes prior prove incredibly absorbing.

More adhering to a methodical character study temperament than an all-out predator vs prey mentality – though the film certainly bases its narrative off that mindset – Hunter Hunter focuses on the Mersault family and the lifestyle they’ve committed to in living off the grid.  Patriarch Joseph (a grizzled Devon Sawa) is content existing in such a manner, whilst his wife, Anne (Camille Sullivan, committing to the film with an emotionality many won’t be expecting) has her concerns in how such a way of life could affect their daughter (Summer H. Howell).

The fact that Linden’s script bothers to form such rounded characters as the Mersault family is a testament to his ability as a storyteller, making sure that we get to know and understand these people so that when the ending does hit (and, my word, does it hit!) we legitimately care.  Hunter Hunter‘s identity isn’t merely defined by a few minutes, it’s an intricately built web that manages to make perfect, logical sense in the context of a story that banks on one’s reaction to its horrific imagery.

A film that ultimately is best left viewed knowing as little as possible – there’s a reason even this review is vague on plot details – Hunter Hunter is a gut-wrenching experience that’s far more emotionally rousing than a straight-to-DVD horror feature has any right to be.  Simplistic as it is, this is smart filmmaking, anchored by stunning, accomplished performances that add psychological weight to its undecorated core.

Hunter Hunter is available to rent/buy on DVD and on digital platforms from April 7th, 2021.