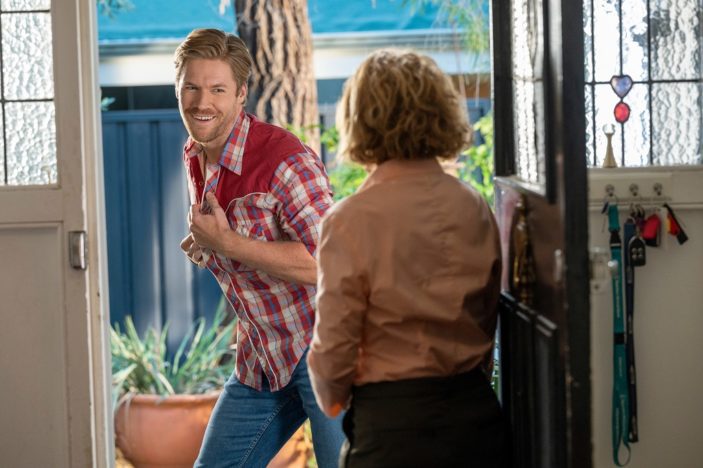 Though its title may suggest it’s a comedy of somewhat raunchy proportions, Renée Webster‘s assured debut feature film How to Please a Woman is a far more accessible, rather delightful dramedy that furthers the female view in a male-dominated industry.

Filmed in Western Australia (and looking particularly stunning in the process), Webster’s film centres around Gina (British comedienne Sally Phillips), an office worker in the throws of a midlife crisis.  She’s recently lost said job and her marriage to Adrian (Cameron Daddo) has more than fizzled out.  Due to such dilemmas, her girlfriends think it would be a right laugh to hire a stripper, Tom (the incredibly charismatic Alexander England), for her birthday, intending for his naked frame to jumpstart her own hormones enough to broach the subject with the distant Adrian.

Gina is ultimately more put out than she is turned on, but it does get her to thinking about her own need for sexual gratification and how if it’s on her mind, it must be on others too.  With a business-minded mentality, and a flailing removal company on her radar – she’s previously approached its owner, Steve (Erik Thomson, the epitome of charm), in the hopes of transforming his business into an all-male cleaning company – she looks into the relatively untapped market of male sex work.

As aesthetically pleasing and particularly confident Tom is, Steve’s other men at work, Anthony (Ryan Johnson) and Ben (Josh Thomson), aren’t as instantly obvious, but both take to their new roles with a certain enthusiasm.  Anthony, who we learn is rightfully endowed for the position, is centred around one of the film’s messages regarding pleasure and how it’s not always the size that matters.  He earns the moniker “jackhammer” due to his one-and-done nature, but with a little coaching learns that his needs aren’t the objective when a woman is paying for maximum service.  Johnson is rather endearing in the role, and the conversation around his sexual experience is one that I’m sure will hit home with more than its share of male viewers – whether they want to admit it or not.

Thomson’s Ben is perhaps one of the major casualties of Webster’s script – even though he gets one of the third act’s biggest laughs thanks to an impromptu strip routine brought on by a serious case of miscommunication – with his character seriously underutilised throughout.  He has a welcome presence, but Tom and Steve earn most of the emotional and romantic weight in terms of the narrative, and the sporadic emphasis on Anthony’s bedroom prowess ultimately leads to Ben feeling like an afterthought in so much of the film’s 107 minute running time.

His lack of screen time doesn’t hurt the film though, with enough genuine set pieces being born from the cast’s natural chemistry and the script’s topical commentary around sex positivity and respect towards sex work.  It’s just more a shame, given how genuinely appealing Thomson is as a performer, that he isn’t afforded as much as his male cohorts.  Where How to Please a Woman might surprise audiences is that it isn’t the straight out comedy its premise could allude to.  It has its moments – a sequence between Gina, Steve, an exercise bike, a croissant, and a certain device is likely to remain a standout – but Gina’s determination in making her new-found business a legitimate commodity means there’s a seriousness to proceedings that assures the sex exploration is never used as a punchline.  It’s refreshing to see sex being treated so organically, but the film’s at times earnest tone might catch those expecting a more rompy temperament off-guard.

A film that’s easily digested and a pleasant step forward in terms of gender equality, How to Please a Woman is a more spiritual journey than a physical one.  It may not deliver laugh-out-loud comedy in spades, but it’s inherently likeable and a welcome breath from the bigger studio fare.

How to Please a Woman is screening in Australian theatres now.