Film Review: Hocus Pocus 2 is campy, nonsensical, and bathed in a self-aware musicality 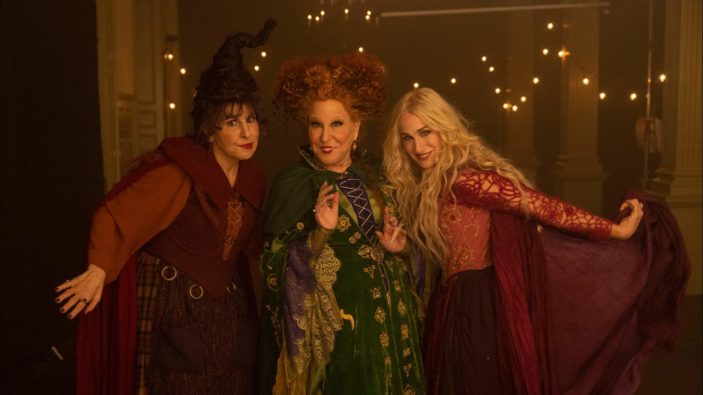 Like so many of the House of Mouse’s IPs, Hocus Pocus has been conjured once more.  Disney weren’t entirely sure they had a success on their hands some 30 years ago with the release of the original film – what with the studio releasing a Halloween-themed family film in July, for starters – and were ready to write the film off as a disappointment when its box office returns weren’t in line with their usual standards.  But thanks to a heft of re-runs on the Disney Channel and physical media sales, Hocus Pocus proved magic (pun intended) to the studio.

And with such success and cult status comes the discussion of a sequel, something that has been festering for the better part of a decade, with, at one point, the notion of a Tina Fey-written continuation being mentioned.  As grand as that would have been, Jen D’Angelo, a writer on such television programs as Workaholics and Young Rock, has been bestowed the honour of succeeding the original’s tale of the infamous Sanderson sisters and bringing them into a 2022 setting, wisely opting to keep the spirit of the original film in doing so.

Knowing that Bette Midler, Sarah Jessica Parker and Kathy Najimy are the sole reason that so much of the first film is as enjoyable as it is, Hocus Pocus 2 wisely doesn’t waste too much time in bringing them into the fray once more.  Their return is campy, nonsensical and bathed in a self-aware musicality – they practically break the fourth wall upon their return, exclaiming “We’re back” directly to the camera – and due to 16-year-old Becca (Whitney Peak) playing around with magic that she is unaware has fantastical consequences.

Whilst Winifred (Midler), Sarah (Parker) and Mary (Najimy) are positioned in a semi-villainous fashion comparable to the original film, D’Angelo’s script is smart enough to know that they are also the main reason we are watching such a film, so their status as folk heroes within the town of Salem, as well as their misunderstood beginnings as young girls in the 1600’s, allows Hocus Pocus 2 to celebrate the trio in the same way devoted audiences revere the actresses playing them.  Smart the script may be in some aspects, but it ultimately can’t match the chemistry and natural charisma of its leads, with Midler’s exaggerated exhaustion, Parker’s inappropriate sex appeal, and Najimy’s slight-dimwittedness proving a stronger ingredient than the material provided.

The trio running amuck (amuck, amuck, amuck) on a slightly unsuspecting town means Hocus Pocus 2 does tread similar water, right down to the group of quick-witted teens set on sending them back to the afterlife and hypnotising musical number – this time it’s Midler belting out “One Way or Another” – but the film’s intention on humanising the sisters further than the original (I’ll admit the climax here was far more emotional than I was anticipating for such slight fare) means it exists as a little bit more than just a carbon copy.

Hocus Pocus 2 doesn’t match its predecessor, but it also doesn’t seem to be attempting to, which, in turn, assists this enjoyable, if predictable, sequel in performing the right amount of whimsy through its sleight of hand.

Hocus Pocus 2 will be available to stream on Disney+ from September 30th, 2022.