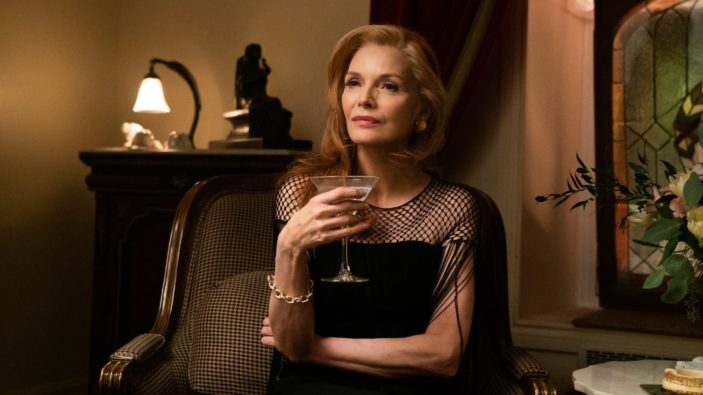 Towards the beginning of French Exit, Azazel Jacobs‘s at once tragic and surreal comedy, Michelle Pfeiffer‘s initially icy New York socialite Frances Price seemingly mocks the romantic uncertainty of her adult son, Malcolm (Lucas Hedges).  “Menstruating?”, she asks when he refuses to divulge any type of answer to his sullenness, confirming screenwriter Patrick deWitt‘s penchant for almost-derogatory leaning comedy that reveals itself to be far more heartfelt than what it presents as.

Presenting itself as one thing, only to ultimately reveal as another is very much French Exit‘s mentality, with Jacobs’s bleak comedic tone – almost stealth-like in its biting approach – underlying a truly bizarre, almost farcical film that has the audacity to skewer a supernatural element some-halfway through proceedings, and doing so in an organic approach, no less.

Initially something of a two-hander between Frances and Malcolm, French Exit sets up its eventual titular escape as Frances’s dwindling financial situation becomes a bleak reality; “My plan was to die before the money ran out, but I kept and keep not dying, so here I am” is her matter-of-fact response to her worried accountant when he asks what exactly was her monetary plan.

Living a social, widowed lifestyle has clearly caught up with her – we learn that upon discovering the deceased body of her husband (Tracy Letts) she delayed contacting the authorities and went on a brief holiday instead – and instead of doing the responsible thing by foregoing such extravagances and seeking employment (which would appear to be a first for our Frances), she sells what assets she has left and flits off to Paris, dragging Malcolm along for the indefinite hiatus; his own relationship woes with exhausted fiancee Susan (Imogen Poots) clearly not worrisome enough to prevent him from doting.

Once the two arrive in Paris – by way of boat, which in itself displays Frances’s care-free nature towards this third act of her life – it becomes increasingly clear that Frances harbours some sort of death wish, and though the Parisian setting brings forth much of deWitt’s sharp wit, it’s consistently laced with a sadness that is tied to Frances’s own personal struggles.

Whilst we await the film to adopt its ensemble comedy mindset, much of French Exit (if not all, really) is designed primarily as a showcase for the wonder that is Pfeiffer, the actress doing so much with the simplest of words, those pursed lips and a steely gaze; all three of these working in perfect unison in no better moment than when Frances, confused as to why she and Malcom are the only guests at a so-called New Year’s Eve party, quietly, yet sternly asks “What the fuck is going on here?”.

Though the film delights in all of Pfeiffer’s nuances, its decision to gradually become something of a collaborative effort furthers its strength as both a showcase for the actress and a situational film, one that embraces its absurdities and treats them as rather customary.

The Parisian apartment that was to play house for the gradually disconnecting Frances and the cautiously purposive Malcom soon becomes the playground for a host of offbeat characters, all of whom similarly chew on deWitt’s dialogue and spit it out with aplomb.

In addition to the concerned Susan and her new beau (Daniel di Tomasso), there’s Joan (Susan Coyne), the owner of the apartment, and Frances’s closest friend, who rushes to her side after receiving an apparent suicidal postcard that Frances wasn’t even aware was sent; Madeleine the Medium (Danielle Macdonald), a genuine psychic who enjoyed a night of drunken debauchery with Malcolm aboard the ship over (“the fucked witch”, Frances so graciously refers her as); a kind-natured private investigator (Isaach De Bankolé), hired by Frances to find Madeleine in Paris pertaining to her potential knowledge of finding Frances’s missing cat, Small Frank (the feline earning its own bizarre storyline that, again, manages to present as alarmingly accepted); and, perhaps most memorably, Madame Reynard (Valerie Mahaffey, a Best Supporting Actress contender, if ever there was one), a self-proclaimed fan-girl of Frances’ who essentially appoints herself as Frances’s best-friend following the aforementioned New Year’s Eve “party”.

Controlled chaos would be the best manner to describe what Jacobs achieves, and not just when all these characters come into play.  A quirky mix of naturalism and surrealism is ultimately what French Exit leans into, the type of film that Wes Anderson, Noah Baumbach and Woody Allen would’ve adapted, with deWitt’s deliberate writing creating a type of matter-of-factness around the most elevated comedy that, whilst consistently hilarious, ironically never plays as heightened as may be expected; Malcolm so gingerly asking Frances to “look in the freezer” upon finding an icy, penis-shaped dildo in Madame Reynard’s fridge feels like a build-up to a comedic set-piece (and, in a lesser film, would have been), whereas we instead get a simple, rather somber conversation about the phallic-shaped device and what it is particularly used for; “Why would you want it cold?” is Frances’s burning question.

Distinctly unique as it is, French Exit‘s comedic constitution won’t ultimately resonate with everyone. However far removed the narrative and characters appear though, the underlying heartbreak and the film’s depiction of craving human connection lends it a universal appeal that deserves to be enthusiastically embraced.  Of course, if nothing else, the film should be enough of an excuse to want to spent 110 minutes with the glorious Pfeiffer, the Oscar-deserved performer graciously yet incongruously devouring the surroundings with an unashamed glee that so few of her peers have the nuance to execute with subtlety.

French Exit is screening in Australian theatres from March 18th, 2021