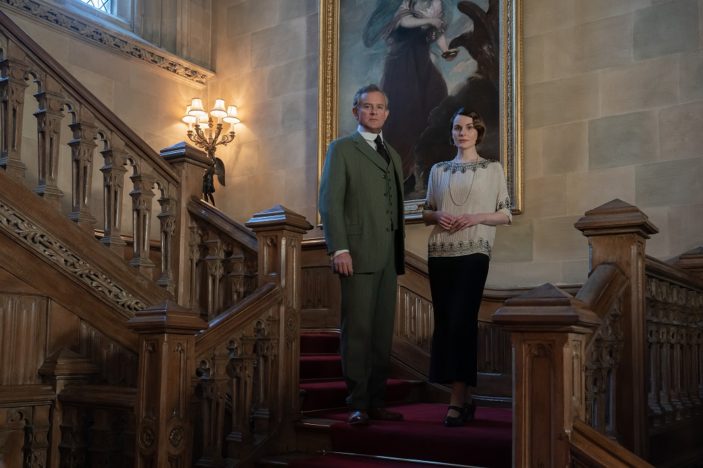 2019’s Downton Abbey, a filmic continuation of the long-running upstairs/downstairs television series that very much played to its strengths of catering to its devoted fans, was a product that very much felt like it had little interest in truly introducing a new dynamic.

For Downton Abbey: A New Era, its bi-line is particularly apt, with a slew of competing plots all working with unexplored narratives that allow both long-time watchers and the uninitiated viewer to suitably be swept away in the regal decadence of its 1929 setting.

Whilst I may not go so far as to say this new era is the start of a new series of films, creator Julian Fellowes has injected enough energy into this story that further detailings seem plausible and, in suitably British fashion, downright pleasant.

Director Simon Curtis (My Week with Marilyn), taking over helming duties from Michael Engler (The Chaperone), feels right at home with the aristocratic milieu that Fellowes’ script adheres to, with the film’s alternating narratives of a familial trip to the south of France and Downton being utilised for a film production providing enough jaunt and drama for its 125 minutes.

Early on in the piece we learn that Violet Crawley (a wonderfully spitting Maggie Smith), the barbed-tongued Dowager Countess of Grantham, has inherited a stately villa in the south of France, gifted to her by a past dalliance (and sternly contested by his widow, played by French actress Nathalie Baye); to deal with the matter, she sends her son, Robert (Hugh Bonneville), his wife, Cora (Elizabeth McGovern), and granddaughter Edith (Laura Carmichael).

Whilst they tend to extravagance and French passive aggressiveness, Violet’s other granddaughter, Mary (Michelle Dockery), eldest to Robert and Cora, cements her post at Downton – seemingly as the family’s new matriarch – when she accepts an offer from a film studio that will pay handsomely to shoot on location at the titular Abbey.  The irony that so many of the well-to-dos turn their noses up at the idea of acting and filmmaking is not lost on the production (Robert so bitingly pronounces cinema as “kinema”), and it allows Fellowes to entertain a bit more cheek in his writing, as well as set Mary up with a moral dilemma that furthers her emotional journey; husband Henry (who is usually played by Matthew Goode) is absent for this film, leaving the flirtatious Jack Barber (Hugh Dancy), the director of the intended Downton-shot film, to serve as a sense of temptation.

As much as A New Era fills itself with scandalous possibilities, it’s all very safe and amusing (as you’d expect), with any sense of drama or heartache offset by age-appropriate romance and humour; so, just as you feel yourself emotionally invested in the plight of Robert questioning his own legitimacy to his family name due to Violet’s supposed fling with a Frenchman half a century ago, you’re distractingly amused by the antics of Jack’s travelling actors, the all-too seductive Guy Dexter (Dominic West, his charm working on over-time) and Myrna Dalgleish (Laura Haddock), a beautiful but Cockney-accented starlet who learns there’s a reason why a transition into talking pictures isn’t a given for her brand.

Though the film proves a definitive end for one particular character – in an extended coda that I’m sure will tug at the heartstrings of more than enough viewers – Fellowes lets the characters linger with the sense that, perhaps, this new era will earn at least one more exploration.  There’s never anything overtly shocking on hand (that just wouldn’t be the Downton way) but the warm hug of a movie this is perfectly summarises the feeling that maybe we’ll all meet again soon.

Downton Abbey: A New Era is screening in Australian theatres from April 28th, 2022.