Film Review: Coming Home in the Dark is a menacing feature brimmed with horrific potential 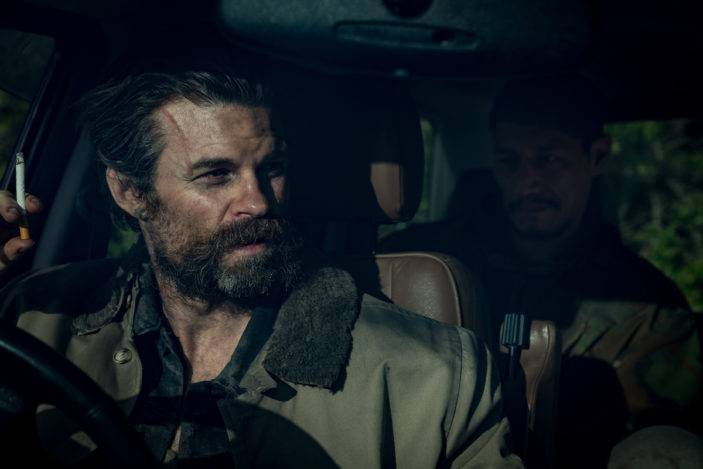 It doesn’t take much for director James Ashcroft to create the most horrific of situations from the simplest of ingredients laid bare in the early stages of the eerie Coming Home in the Dark.  A loving family, an idyllic New Zealand locale, and a duo of passing strangers provide all that is needed for Ashcroft’s script (written in collaboration with Eli Kent) to transform into a tale of believable terror, one that foregoes any overt gore effects in honour of the genuine horror born from the nastiness of the human psyche.

For husband and wife “Hoaggie” (Erik Thomson) and Jill (Miriama McDowell), and their two phone-addicted teen sons, a hiking excursion appears as the best mode to break up the monotony of extensive driving.  Cheesy jokes and shared stories paint the organic picture of a loving, imperfect family, and a waterside picnic-spread the best spot to cap off their day.  We already sense the dread that will come when we spot the silhouettes of two men atop a nearby mountain during the family’s walk, but it’s when these men make their presence felt that the film firmly tightens its grip.

As the quiet Tubs (Matthias Luafut) strolls in and starts taking the family’s belongings, the intensely imposing Mandrake (Daniel Gillies) introduces himself in a manner that falsely suggests the family will be fine should they abide by his rules.  The cock of Mandrake’s rifle sends a shockwave through the narrative that almost puts the film at a disadvantage so early on.  The robbery that takes place requires more from Hoaggie and Jill than just their belongings, and as Mandrake slowly taunts them it becomes evident that his and Hoaggie’s pasts are intertwined.

Karma and the consequences of our sins is ultimately the mentality Coming Home in the Dark adheres to, with the revelation that Hoaggie and Jill are both teachers, and the mention of a boy’s home that Mandrake attended as a child resulting in the potential reasoning behind this “chance” encounter.  It’s twisted and furthers the film’s dangerous tone, but after announcing itself as something of a bold character in the early stages where it revelled in unpredictability, the coincidental nature of the story moving forward pertaining to Hoaggie and Mandrake’s connected past is all a little too convenient and contrived.

The film also never moves beyond the intrigue it teases.  The notion that Mandrake was subjected to abuse as a child is horrific, as is the thought that Hoaggie potentially knew about it – or, even worse, participated – but these allusions are never fully realised.  Did Mandrake stalk Hoaggie in the lead-up to their waterside assault or was this a case of ill timing for the family and Mandrake just struck out?  A little more fine tuning could’ve really elevated what is a tension-laced thriller, one that expresses so much potential but can’t quite navigate as such in a cohesive manner.

Whatever shortcomings Coming Home in the Dark has in the story department are easily made up for in the ensemble, with Gillies leading the charge with a nasty, unflinching turn that utilises his charm to cunning effect.  He’s well opposed by the equally dangerous yet more stoic Luafut as Tubs, who proves unwavering in his commitment to Mandrake’s orders.  Thomson has an everyman quality about him which immediately makes him a relatable force, a father and husband that just wants to keep his family safe, and will do whatever he can to do so.  He makes a few classic horror movie mistakes whenever he gets the upper hand – there’s a gas station sequence that can’t help but feel incredibly frustrating in this aspect – but he bounces off Gillies with ease, both characters tapping into their immorality for the sake of their own survival.

Brutal without being gratuitous, Coming Home in the Dark keeps its horrific nature at a constant boil, but the fire ignited so early on unfortunately can’t be sustained as brightly for its 93 minute running time.  A promising showcase for the talent involved, this menacing feature is brimmed with potential that just needs a healthy case of calibrating to push it over the line.

Coming Home in the Dark is screening in Australian cinemas from September 9th, 2021.

Coming Home in the Dark was originally reviewed as part of this year’s Sundance Film Festival, which ran virtually between January 28th and February 3rd, 2021.