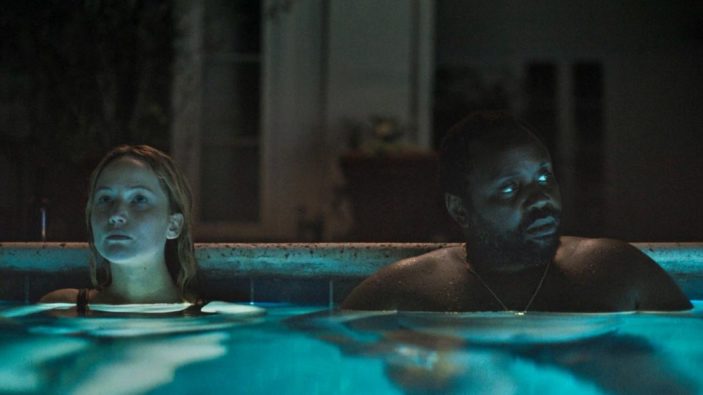 A low-key slice of independent cinema that you imagine wouldn’t be given as big of a spotlight had it not been for lead Jennifer Lawrence, Causeway nonetheless deserves its attention as it’s a determined and moving picture about one’s healing, both emotionally and physically.

Adhering to the stripped-away mentality that drove her to her first acclaimed role a decade prior in Winter’s Bone, Causeway leaves nothing of trace for Lawrence to hide behind as Lynsey, a soldier suffering from PTSD following an on-site explosion that killed her comrade and has left her psychologically shaken.

We meet Lynsey in the inception stages of her recovery.  She’s near-silent as she winces through the pain of the simplest of motor functions, and when she does speak her candor is unfiltered; Jayne Houdyshell as Lynsey’s initial carer – a divine supporting turn – forgives such honesty, stating she’s aware that it’s all part of the process.

As she navigates the uncertain balance of her emotional state, Lynsey returns to her home of New Orleans in an indefinite hiatus, ironically wanting to immediately re-deploy to the very environment that scarred her, but she knows she’ll have to prove her good health before given the green light; Stephen McKinley Henderson providing tender support as her concerned doctor.

Effortlessly portraying a sense of disconnection without demanding sympathy, Lawrence is expectedly stellar as Lynsey, forgoing much of the showiness that underlined her (still great) turns in the likes of Silver Linings Playbook and American Hustle.  There’s a realness to the way she portrays her brokenness.

There isn’t a lot of levity to Lila Neugebauer‘s film, but the moments it does decide to let Lynsey breathe mainly surround her blossoming relationship with James (Brian Tyree Henry, beautiful), another broken soul who she meets when she needs her truck fixed, and soon they’re sharing drinks and trading war stories (her, quite literally).  A romance seems possible, but Lynsey’s casual mention of dating women immediately friend-zones him, but Otessa Moshfegh, Luke Goebel and Elizabeth Sanders‘ script is smart enough (and organic enough) to not let this derail their relationship; if anything, it adds a welcome complication when another of her painfully honest retorts reveals how she truly feels following an almost-moment between them.

James’s own fragility further speaks to the strength of the film’s components.  Despite him being disabled – we hear of his horror car accident story and see the remnants of it in a latter scene – Causeway doesn’t emphasise or flag this for his character.  It doesn’t define him the way a lesser storyteller would have opted to lean into.  It’s also of immense benefit that Henry is just as good as Lawrence, managing a sense of calm through his evident anger that, if promoted correctly, should reward him throughout award season as his delicate, quiet performance is far too powerful to be ignored.

Sensitive and subtle, Causeway may be too subdued for some audiences wanting such a dramatic tale to punch through the silence, but it’s the undecorated nature of Lawrence’s performance and Neugebauer’s storytelling that ironically makes the loudest noise.

Causeway is now available to stream on Apple Tv Plus.

Causeway was originally reviewed as part of our 2022 Toronto International Film Festival coverage.