Film Review: Carnifex is a serviceable man vs. beast outing that embraces tension over gore 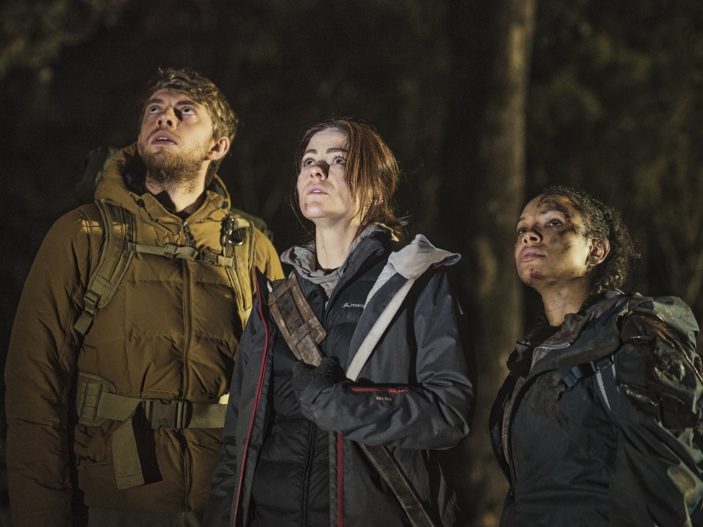 You’d think people would learn by now that no good comes from hoping to find a new species.  Or, in the case of the trio at the centre of Australian creature feature Carnifex, an endangered species they’re hoping may still be alive in the aftermath of a bushfire-ravaged Australian forest.

There’s been some controversy surrounding the film too – legalities on the origins of the film that I won’t get into and that have no weight on my review – but it’s not an area I feel comfortable commenting on, so looking at first-time director Sean Lahiff‘s efforts on their own merits projects a filmmaker with a knowing sense of the genre; as well as someone skilled in utilising what seems to be a lower-end budget.

Back to this well-meaning trio though, as it’s aspiring documentary filmmaker Bailey (Alexandra Park) and scientists Ben (Harry Greenwood) and Grace (Sisi Stringer) – the latter two clearly in the somewhat early stages of a professional-turned-personal flirtation – who take an off-road journey to check motion sensor-cameras that have been designed for the purpose of monitoring the movements of wildlife.

For a while there it doesn’t seem like they’ll find much of serious interest, and Bailey may have to make do with a lot of talking head footage of both Ben and Grace, but once Ben talks about the history of the Thylacoleo Carnifex, a dangerous marsupial that apparently links itself to the mythical drop bear, we wait in anticipation as Lahiff gradually corners his narrative towards a man vs. beast mentality, with the titular creature proving very real and, tragically for our centric humans, very angry.

As the tension builds and the trio see markings and skeletal remains that do indeed suggest there’s something dangerous out there in them woods, Lahiff is all too aware that characters making smart decisions puts an immediate hold on any type of fun a scary movie of this ilk should deliver, so there’s just enough splitting up and “You wait here” for us to be annoyed, but equally invested in their plight.  And though there isn’t too much on hand here that we haven’t seen before, Carnifex definitely earns points for pulling off a series of jump scares that earn genuine reactions (wanna bet something drops from the sky more than once?) and even though the characters lean into the stereotypical actions we come to expect from these genre works, Greenwood, Park, and Stringer are all likeable performers who inject their respective characters with enough charm and humanity that it makes us care when they’re put in peril.

Though only sporadically violent, Carnifex exercises the notion that less equals more, and Lahiff wisely leaves much of the gore to the imagination, whilst teasing just enough for us to know how brutally impactful the creature on hand is.  On the mention of the beast itself the CGI is used sparingly as to not lose total effect, and whilst the film’s low budget is most evident here, it doesn’t take away from it as an overall effort.

As terrifying as the situation presented here would be in reality, there’s a lot of fun to be had in Carnifex, especially in its climactic moments when our survivors (I won’t spoil who is making out of this alive) get to flex their heroic chops in a manner that reminds us that, as much as we are watching a film detailing the importance of saving forest life and endangered species, it’s still a popcorn creature feature at the end of the day.  And a serviceable one at that.