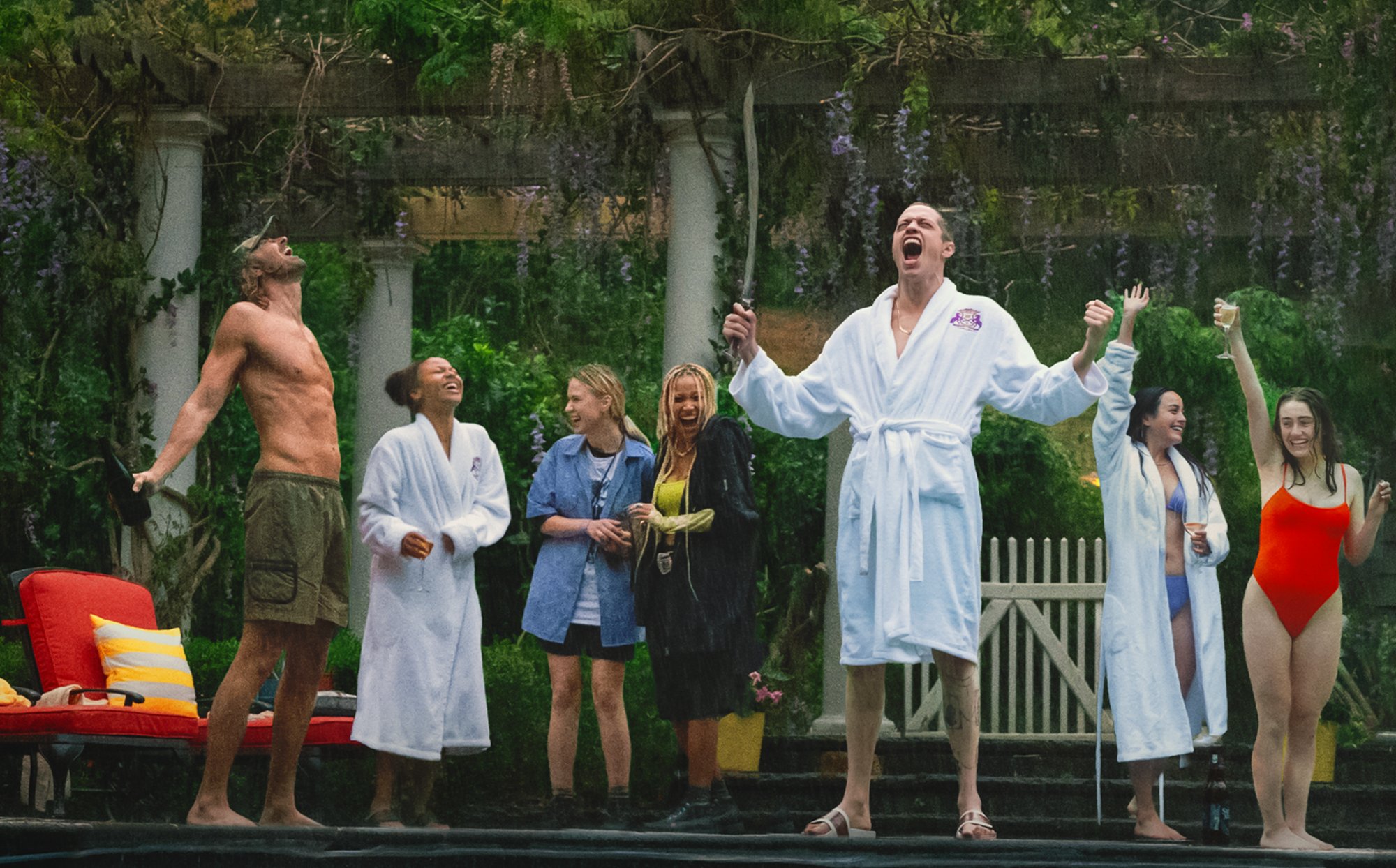 Bodies Bodies Bodies tells the story of a group of exuberant 20-something youths who plan to party for the weekend in a remote mansion. Partygoers include Sophie (Amandla Stenberg), a rich kid who has a dark backstory involving drug use, her partner Bee (Maria Bakalova), a working-class reticent young woman, David (Pete Davidson), an unruly braggart who is not afraid to state what is bothersome around him, Alice (Rachel Sennott), a jovial podcaster who embraces what is around her, Alice’s boyfriend Greg (Lee Pace), a considerably older man who has recently come back from military service, Emma (Chase Sui Wonders), a rising actress whose occupation seemingly belies something underneath her guarded exterior and Jordan (Myha’la Herrold), a stern young woman whose passive-aggressive nature makes her a stand-out.

The plan is to have a wonderful time during the time a hurricane showers on the mansion. To pass the time, the group plays a game of Bodies Bodies Bodies, which involves teamwork and solving a mystery of a hypothetical murder. But when someone in the group is actually murdered, the group start to suspect each other; bringing broiling emotions and secrets into the open. Who is the killer amongst them? Will they even survive the night?

Bodies Bodies Bodies is the English-language debut from actress/filmmaker Halina Reijn. She is best known for her work in the Netherlands as well as her electrifying directorial debut Instinct. Reijn specializes in pressure cooker dramas that revolve around taboo subjects within confined spaces; having extensive experience in theatre.

In the case of Instinct, the story of a prison therapist falling in love with her convict patient focused on two characters, respectfully playing moth being drawn to a flame. However, in the case of Bodies Bodies Bodies, every character in the film is a flame. That makes the natural progression from the former film to the latter film the perfect segue for Reijn. What better stage for pressure from a geographical and emotional standpoint than a whodunnit?

Through filmmaking craft alone, Reijn and crew have done a wonderful job in portraying the escalation of tension. For example, the staging of characters in the scene often feels engagingly claustrophobic – particularly when we follow Bee and how out of place she feels amongst the group. In the later acts of the film, the staging becomes even more crippling that the flames become propulsive that it burns all the oxygen in the room.

The nighttime setting allows production designer April Lasky and cinematographer Jasper Wolf (who also worked on Instinct as well as Monos) to play around with genre conventions i.e. the mansion itself is a mix of antiquated design and modern aesthetic that tips its hat to the whodunnit genre and its characters.

The use of props in the art direction (by Luke Green) that are significant to the plot as well as the overall visual aesthetic — i.e. the use of smartphones and fluorescent lights — lend the story a heightened sense of garishness that makes the stakes felt, the comedy more immediate and the drama more powerful. Especially in a notable sequence set in a home-gym involving an escalating confrontation between the group.

Even the use and timing of the energetic soundtrack (by Disasterpiece) is intricate as it is rarely used within the escalation of bouts of violence or verbal conflict, but only through the payoffs. The only potential deal-breaker of the film is the ending. While it fits the nature of the plot and its characters perfectly, it may alienate those who are more fixated on the tropes of the whodunnit genre.

The sharp script by Sarah DeLappe lays out the foundation of the characters deftly through well-timed foreshadowing and solid characterizations, as it gives the actors plenty of room to grow and dig into their dimensions. It also finds time for social commentary amongst the human condition within the zoomer generation and retrofits them into whodunnit conventions quite well. Like a lot of whodunnits, the impressions of characters the audience sees are always a façade – a performative stance if you will.

When characters engage in combative stances over how characters act out as opposed to saying how they really feel, the broiling emotions shine through in both the drama and the dark comedy. The comedy may not always be subtle – if the characters are not subtle, why should the script? – but it does bear a sense of integrity that feels true and real; especially when characters feel the need to support but only within their best interests or when characters simply do not have the gumption to voice their independent thoughts and when they do, it ends disastrously.

A lot of credit goes to the actors, who do a marvellous job in bringing their characters to life. All of them are working with both the script as well as Reijn’s insistence on showcasing emotion through physicality – hence the numerous close-ups of the faces and hands of the cast — as well as improvisations as capably performed by the comedians in the ensemble.

Bakalova is believably timid as the self-imposed Bee while Stenberg displays a strong sense of emotional dexterity that throws people off guard just when one thinks they have a handle on her character as Sophie. Wonders is both amusingly theatrical and surprisingly poignant as Emma as she both handles the duplicitous demeanour she conveys towards her peers as well as the moments when she is pointed out that her thoughts and feelings are being disregarded. Herrold is engagingly assertive and imposing as Jordan as her instinctual actions may be more than just survival; and Sennott is an absolute hoot as the naïve and oblivious Alice.

As for the males, Davidson is hilariously sharp and abrasive as David; ably playing the bullshit-detector of the group with utmost ease. While Pace manages to segue between the role of being the flirtation device and the mysterious wild-card with gleeful relish.

Overall, Bodies Bodies Bodies is an extremely fun time that blends tried-and-true genre tropes with prescient views on the human condition in a story that is funny, thrilling and simmering with angst that is sure to provoke. Highly recommended.