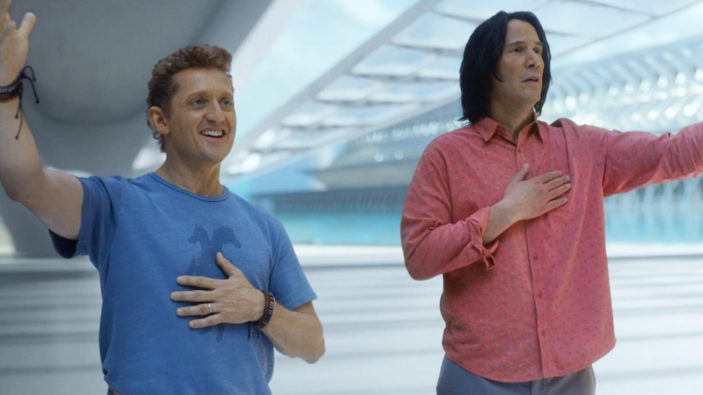 As someone who was a kid when the first two Bill & Ted films were released (Excellent Adventure in 1989, Bogus Journey in 1991), and watched them on a regular basis throughout my childhood, I’m very much in the target demographic for the unexpected sequel that is Bill & Ted Face the Music.  As 1980’s-leaning programs like Stranger Things have seemingly rebooted the love of all things of that decade, Hollywood has followed suit with a number of projects that have tapped into that mentality.

Ghostbusters, The Karate Kid, Top Gun, and Teen Wolf are just some of the hot 80’s properties that have seen either television series, film sequels or remakes produced in the last few years, and due to either their relative profitability or critical success it seems to only be reinforcing Hollywood’s belief that revisiting the old is more lucrative than investing in the new.  Whatever the reaction to that mentality is, it’s difficult to not muster excitement when something like Bill & Ted earns a revisiting right, especially when its original stars – Keanu Reeves and Alex Winter – are enthusiastically on board.

Whilst interest to revisit the duo on Winter’s end is understandable – the actor’s career only sporadic since Bogus Journey – it was Reeves’ willingness to join that truly propelled Face the Music towards viability.  Seemingly doing his best to shed the Californian slacker image he so effortlessly created with the simplest “woah” delivery with a varied career in action and drama in the years since, Reeves embracing the character that arguably earned him recognition early in his career signalled a trust and fondness for the material that fans no doubt hoped would translate to a film worthy of a near-thirty-year break.

As this is very much a fan serviced film, Face the Music caters to its faithful audience, meaning the uninitiated or casual viewer are likely to feel left out of the outlandish lunacy director Dean Parisot (Galaxy Quest, Fun with Dick and Jane) wholeheartedly embraces.  The opening scene at the wedding of Deacon Logan (Beck Bennett), younger brother of Ted (Reeves), is a testament to the film’s carefree attitude in catering specifically to its core viewership, with the lighthearted delivery from Reeves and Winter immediately reminding us of the amateur charm they exuded so many decades prior.  Said wedding is a farcical excursion, if ever there was one, with Deacon exchanging vows with Missy (Amy Stock), who, as we learn in a comical toast, is the former girlfriend of both Bill (Winter) and Ted, as well as their former step-mother, having previously wed both their fathers.  Still obsessing over the prophecy that determined they would “write a song that would unite the world”, Bill and Ted test out their latest musical venture at the ceremony, an experimental mess (complete with a theremin) that deflates them and furthers  their doubts that they will fulfil the prophecy.

The narrative only gets more bizarre from there as Bill and Ted, their adoring, similarly-minded daughters, Theadora (Samara Weaving) and Billie (Brigette Lundy-Paine), and their royally-inclined wives, Joanna (Jayma Mays) and Elizabeth (Erinn Hayes), all venture on their own time-travelling missions in their respective bids to find their own inspiration behind their relationships.  For Bill and Ted, it’s to understand from their future selves how they came to write such a world-uniting song (Reeves and Winter have a ball of a time embracing various incarnations of themselves).  For Theadora and Billie, it’s assembling the greatest musicians of history – including Jimi Hendrix (DazMann Still) and Louis Armstrong (Jeremiah Craft) – to accompany their dads.  And for Joanna and Elizabeth, it’s coming to terms with loving a duo of men who find a difficulty in separating themselves from each other; a joint couples therapy session involving the four of them under the confused direction of Jillian Bell‘s doctor is one of the film’s many ridiculous comical set-pieces that veers just out of control enough to earn humorous mileage without over-extending the joke for indulgence sake.

In fact it’s the film’s surprising restraint that acts as one of its greatest strengths.  The Bill & Ted films have survived on their ability to inject heart and common sense into their outlandish situations, and as much as Face the Music goes bonkers with its narrative, it somehow never overstays its welcome throughout.  If you’re someone who is unversed with these films and you enter with a blindness, you could very well be swept up in the chaos of it all.  It’s undeniably charming – even at its most dense – and if you can avoid analysing the material, you could very well enjoy yourself.  At the same time though, its brainlessness may prove too numbing for others, and if you’re unprepared for Reeves and Winter dumbing themselves down you’re likely to dismiss the film.

Next to the natural camaraderie of Reeves and Winter, Face the Music succeeds off the multitude of support players who all similarly lean into the nature of the film without a hint of vanity.  Weaving and Lundy-Paine are particularly grand as Theadora and Billie, the two effortlessly embracing the mannerisms and inflections of their respective movie dads, whilst the return of William Sadler as Death, arguably one of Bogus Journey‘s stand-out additives, proves a real treat; the actor making the most of the one segment he prominently features in.  New faces like Kristen Schaal and Holland Taylor, as a mother-daughter time-travelling combo, have fun with their passive aggressive relationship, and, bizarrely, Kid Cudi is surprisingly effective as a heightened, supremely intelligent version of himself, but, undoubtedly, Face the Music‘s most potent ingredient is Anthony Carrigan as Dennis Caleb McCoy, a guilt-ridden robot who transcends expectations as an initial side character to ultimately emerge as the film’s hidden comical gem.

Arriving at just the right time, Bill & Ted Face the Music embraces the character’s motto of “Be excellent to each other”, cliched as it is, and delivers on a genuine joy and harmlessness that feels more important than ever to experience.  Whether or not this brand of lighthearted goofiness will be embraced by the general masses remains to be seen, but for the fans, this slice of nostalgia proves more than worth the wait.

Bill & Ted Face the Music is screening in most Australian cinemas from September 10th 2020.