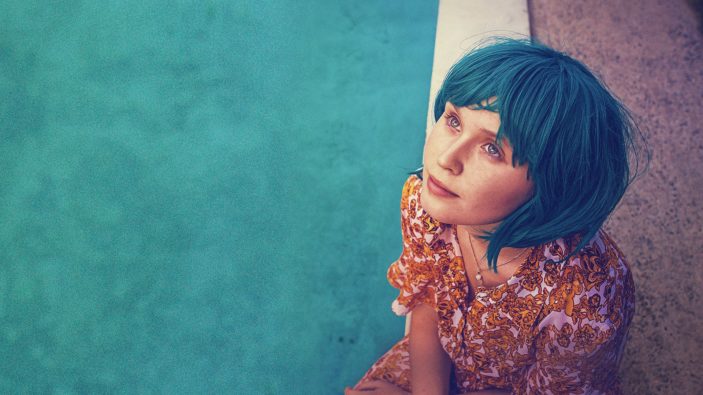 Whilst it’s easy to roll your eyes at the almost insultingly familiar narrative Babyteeth works with at its core – terminal ill teenager falls in love with the wrong guy – it somehow manages to avoid most of the genre cliches, thanks to a mindset that isn’t afraid to be messy, frustrating and, at times, darkly comedic.

Said terminally ill teenager is Milla Finlay (Eliza Scanlen), a 16-year-old battling cancer constantly looking to live her life unrestrained from her diagnosis.  Her parents (Ben Mendelsohn‘s Henry and Essie Davis‘s Anna) are as loving and as supportive as they can be, but, outside of Milla’s immediate care, there’s more than a series of troubles bubbling towards the surface; Henry’s default fix as a therapist for his wife’s troubles in plying her with drugs being just one of them.

In a deranged meet-cute that almost results in Milla being unintentionally pushed onto near-by train tracks, Moses (Toby Wallace) quite literally crashes into her.  In any other film, Moses would perhaps be bathed in a more desirable light, but here he’s tatted, heavily into drugs, and donned with a rattail.  He’s essentially homeless, and, as we come to learn, highly unreliable, but there’s something about his candour that lights Milla up, pulling her out of the daze she previously succumbed to.

Whether it’s a rebellious act against her upper- middle class surroundings or a genuine attraction – we suspect it’s a hybrid of both – Milla near-immediately invites the 23-year-old Moses into her home life, much to the chagrin of her want-to-be-understanding parents; one of the film’s highlight sequences is the first “family” dinner together where Anna, under the influence of whatever tablet cocktail she’s been given, can’t hide her disbelief at Moses being in her presence.

Though there’s much frustration to be had at how smitten Milla is by Moses – the Rita Kalnejais-penned script often showcases Milla’s naivety – we understand the necessity for his chaotic energy in her life, and thanks to a superb, and very human, turn from Wallace, we are unable to hate Moses as much as we want to.  There’s a sweetness to his performance, and it’s through that that we grasp why both Henry and Anna seemingly allow his distraction in Milla’s life.

As grand as Wallace is, and Scanlen is quite marvellous in a role that, in a lesser actress’s hands, could’ve been overdone in tragedy or preciousness, there’s an irony in that a story about Milla, it’s Mendelsohn and Davis as her parents that truly drive the film home.  As strong as they are vulnerable, the two organically navigate their untested waters of parents trying hard not to sever their relationship, both as parents and as a married couple.  Individually, they share moments with Moses that reveal just how deep their love for Milla truly is, both going against their parental instincts and embracing him, knowing that he is ultimately what will keep her fighting to stay alive.

Outside of a few narrative issues that appear to be casualties of the editing process – there’s a side-arc involving Moses and his family (specifically the relationship with his brother) that doesn’t feel complete, despite a late-in-the-story additive that suggests otherwise – Babyteeth has plenty of emotional resonance and snappy bite to warrant investment.  And outside of its stellar ingredients, the fact that an Australian movie, headlined, written, and directed by women (Shannon Murphy serves as the latter) is receiving a prominent release is cause enough for celebration.

Babyteeth is screening in Australian theatres from July 23rd 2020.  It’s available to watch now through various Video On Demand platforms in the United States.