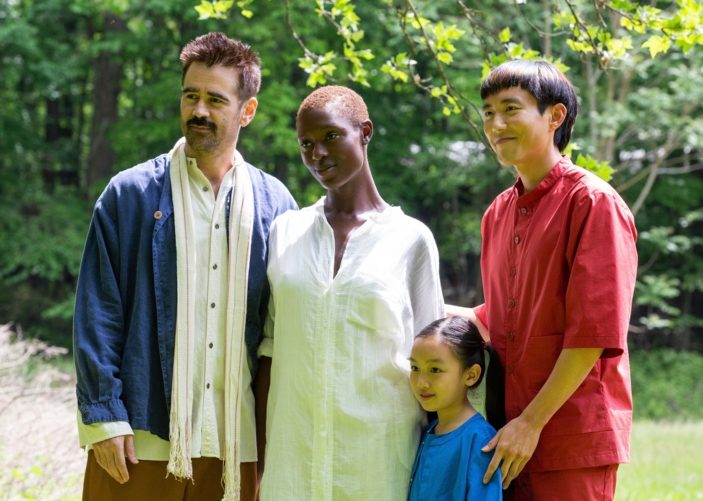 After his more theatrical (and unrecognizable) turn earlier in the year in The Batman, Colin Farrell brings a more natural, introspective quality to After Yang, Kogonada‘s poignant science-fiction drama that evokes memories of Her, Ex-Machina, and Blade Runner 2049 throughout.

An adaptation of Alexander Weinstein‘s 2016 short story “Saying Goodbye to Yang”, Kogonada’s film throws you off guard from its wild opening credits – seriously, the dance number put to film here is as joyous as it is bizarre – before settling into a more dramatic, oft-mysterious temperament that follows Farrell’s Jake as he spends his day hoping to mend his robotic child.

And that’s robotic used in the most literal sense.

Set in a future where androids can be adopted and raised as members of human families, Yang (Justin H. Min) has become a loving, valued member of Jake’s crew, proving of particular importance to Mika (Malea Emma Tjandrawidjaja), Jake and his wife’s adopted Chinese daughter who, thanks to Yang, is connecting to her heritage in a way she hasn’t been exposed to prior; Jodie Turner-Smith stars as Jake’s wife, Kyra.

When Yang fails to boot-up one morning, Mika is understandably distraught and refuses to go to school until she knows he’s alive and well.  Not wanting to devastate his daughter, Jake takes the day off from his working duties and travels across his city in order to find a repairer willing to work on Yang; Jake’s decision to buy Yang second-hand means official repair duties aren’t as readily available.

Taking advice that leads Jake to partake in illegal activity, a technician’s look into what has gone wrong with Yang opens up an unknown additive in his technological make-up – a camera.  Soon, Jake accesses Yang’s memories, revealing a more humanistic side to someone his family had taken so much for granted.

As easy as it could have been for After Yang to lean heavily into schmaltz and melodrama, its musings on reconnecting with family and the human condition are never indulged to the point of sickly sweetness.  There’s an atmospheric beauty to the film and an emotional reality that keeps proceedings grounded despite its futuristic state of mind.

Whilst some audiences may be expecting something a little more exciting in the traditional sense, After Yang is ultimately a very human drama dressed in an artificial setting that should cleanse those whose pallets are oversaturated with superficiality.

After Yang is now screening in select Australian theatres now.