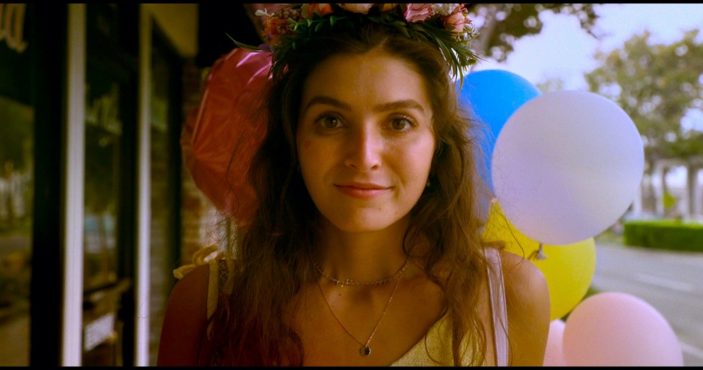 An incredibly topical drama that navigates its story with natural humour and heart, Sophie Galibert delicately treads the waters around the subject of unwanted pregnancy in her feature debut, Cherry.

Initially adhering to a more comical temperament, Cherry centres on its titular character (Alex Trewhitt, a star-making turn), a driftless, 25-year-old Los Angelean, whose already unspectacular life has a major spanner thrown in to force her into a sense of re-evaluation.

She’s pregnant, you see, and when she learns that she’s already 10 weeks in, she’s informed that the window on whether or not she wants to remain in such a family way is vastly closing; 24 hours, to be exact.

Fired from her menial job at a costume shop – her speciality is balloon art, apparently, but when she passes off a “sword” that looks more phallic, we understand her boss’s resistance in keeping her on hand – and feeling that the support in her household is limited, Cherry putters around town hoping to find clarity in her relationships with her boyfriend (Dan Schultz) and best friend (Alice Bang); goes without saying that neither bring her much comfort in her hour of need.

Whilst the early minutes of Cherry are a little more light in their tone – the appearance of the clinic’s medical assistant (a hilarious Darius Levanté) brings forth a certain wit and sass – the majority of the film is a more meditative experience and how one person’s view on you and your world can drastically alter from your own perception.

As topical as the film is, too, regarding abortion, writer/director Galibert doesn’t make Cherry a statement piece, focusing more on the character’s own personal reaction to whether or not it’s a path she wants to choose, rather than it being an obstacle she needs to overcome.  Addressing the issue would’ve been understandable, but keeping it an underlying theme whilst the character navigates helps the film feel a little more accessible to an overall audience.

Showcasing a quirky, yet naturalistic mentality behind the camera, Galibert expresses immense promise as a filmmaker with Cherry, bolstered by a relatable Trewhitt, who injects her character with a charm that feels organic rather than a trait to merely mask her occasional personality flaws.  Hopefully not overlooked by audiences due to its subject matter, Cherry is an ultimately uplifting film that doesn’t beat its message over the heads of its viewers, merely offering it as an additive in a story that’s more universally human than may be expected.

Cherry is screening as part of this year’s Tribeca Film Festival, which is being presented both virtually and physically between June 8th – 19th, 2021.  For more information head to the official Tribeca page.