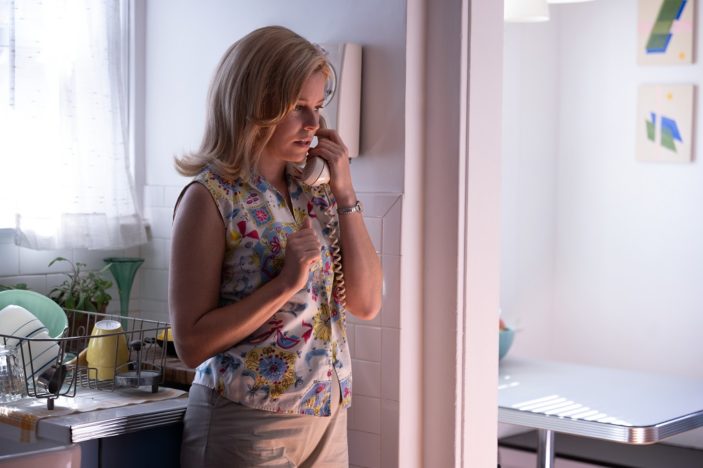 There’s a scene in the first third of Call Jane that I can only imagine would infuriate the female audiences in attendance.  Abortion is not a subject I have any real right to comment on – I am pro choice, for what it’s worth – but, in 2022, it’s almost insulting that sequences taking place in a film set in 1968 mirror much of what’s taking place today relating to women’s autonomy.

The scene in question revolves around housewife Joy (Elizabeth Banks), who is pregnant with her second child and experiencing dizzy spells that, as she learns, are connected to a heart condition that could worsen and prove fatal should she carry the child to term.  With her concerned doctor and lawyer husband (Chris Messina) in tow, she appeals to a medical board – all men – to be granted the right to an abortion.  She is denied.  It’s this act that spurs Joy on to find an alternative solution, leading her to a collective whose goal it is to assist women, like Joy, in similar situations.

The Jane Collective, a real initiative that operated in Chicago between 1969 and 1973, gets the majority of the focus (understandably) in Phyllis Nagy‘s dramatic feature (the director best known for penning the Todd Haynes outfit Carol), but it sadly loses momentum throughout whenever it opts to focus on the marital woes of Joy and her husband, leading to a mostly inconsequential side-plot involving their well-meaning neighbour (Kate Mara, unfortunately wasted, though still turning in a fine performance).

Apart from a finale that feels all too neatly wrapped up and featuring some on-the-nose dialogue about how equal pay for women “can’t be harder” to fight for than the right to an abortion (it’s clear this film was seen through 2022 eyes), Call Jane is still a highly enjoyable and important feature that more-often-than-not succeeds thanks to an enthusiasm that speaks to its investing topic and a largely-female cast that play off each other with an ease that helps soften the seriousness Hayley Schore and Roshan Sethi‘s script is adhering to.

The scenes where the Jane Collective are debating how they help each woman in crisis – many of whom can’t pay the $600 fee they require for their sole doctor’s services – prove the film’s most interesting, further assisted by the presence of the always exciting Sigourney Weaver, here playing the collective’s founder, Virginia, a stern but sweet feminist who fuels Joy’s interest in the women learning the medical procedure themselves in order to cater to even more of their clientele.

Shot on film and laced with a grain that adds to Call Jane‘s retro temperament, Nagy’s film proves unfortunately relevant in today’s climate.  It may be a more light-hearted approach when looking at the severity of its topic, but it’s no less important, and audiences – no matter the gender – should walk away affected by the proceedings.

Call Jane is screening as part of this year’s Brisbane International Film Festival, running between October 27th and November 6th, 2022.  For more information head to the official BIFF website. The film is scheduled for a release on Prime Video on November 25th, 2022.