Blu-Ray Review: Ticket To Paradise is more a charming detour than it is first-class entertainment 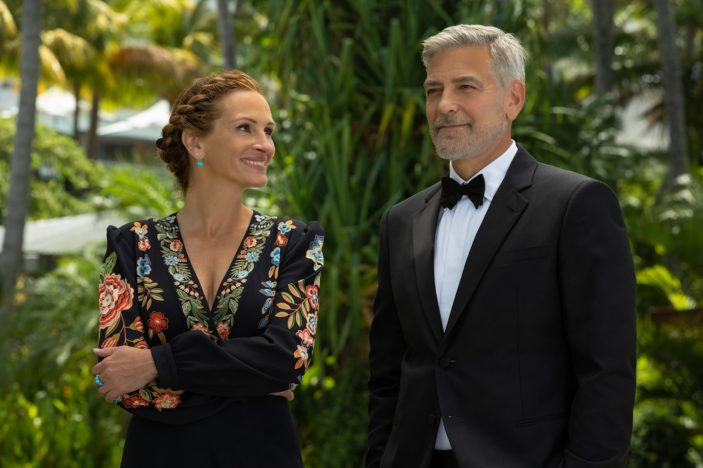 Few actors possess and exude as much movie star wattage as George Clooney and Julia Roberts.  And it’s his attractive gruffness and her screen-lighting smile that keep Ticket To Paradise from being a destination you’d request a refund for.

Local audiences – predominantly those based in Queensland – are sure to get a thrill from Ol Parker‘s subbed location spots here, with the likes of the Whitsundays and Moreton Island performing as a more luxe-appearing Bali where young Lily (Kaitlyn Dever) has taken to a much needed vacation and, unexpectedly, fallen for a local seaweed farmer, Gede (Maxime Bouttier).

A holiday romance is one thing, but 37 days later she’s informing her parents – Clooney’s David and Roberts’s Georgia – that she’s getting married.  And this would all be well and good if David and Georgia weren’t bitterly divorced and could stand to be in the same room; Parker and Daniel Pipski‘s script covering familiar ground in the film’s early stages with conversational set-pieces centred around their once-passionate relationship and its descent into disgust toward each other.

Adhering to the classic trope of not-wanting-their-daughter-to-make-the-same-mistakes-they-did – which is incredibly insulting to Lily when you really look at such a mentality – David and Georgia agree to play nice upon their visit to Gede and Lily’s new island life together, hoping a united front and enough planted seeds of relationship doubt will snap Lily out of her supposed honeymoon haze.

It’s not the nicest idea in reality but it works for the romcom genre, with the rom forming through David and Georgia’s realisation that there’s still an attraction after all these years and the com stemming from various oft-exaggerated scenarios centred around their ill-advised plan; a dolphin attack, a liquor-heavy game of beer pong, and Georgia fending off the surprise advances of her lovelorn new beau (Lucas Bravo) being some of the prime examples of what supposedly constitutes comedy.

For a duo of actors who have proven their worth in the genre prior, it’s a shame that Ticket To Paradise doesn’t give either Clooney or Roberts something substantial to sink their porcelain-white teeth into.  It manages the occasional laugh throughout – with Billie Lourd as Lily’s wise-cracking, party-girl bestie Wren earning most of the afforded chuckles, further proving her talent as a player able to make even the smallest line or reaction worthy of a laugh – and it’s difficult to dislike it as a whole when it looks so spectacularly gorgeous, but this Paradise is ultimately a little more smile-inducive over prescribing booming, belly laughs.

Whilst it would have been more appreciated if the film aimed for something wittier, or, hell, even a little darker and less agreeable given its premise, the fact that we have a big studio backing a movie star-led project on something other than a streaming service is worthy of being celebrated.  The romantic comedy feels like it’s being shafted more and more towards a digital existence, so Ticket To Paradise‘s throwback temperament can’t help but be embraced, even if the collective talent on hand are capable of (and deserve) better.

Perfectly serviceable for audiences that like their genre efforts inoffensive, aesthetically pleasing and cast with a sense of comfort – I’ll admit, there’s a certain safeness felt in the hands of both Clooney and Roberts – Ticket To Paradise may not be first class entertainment, but you know you’ll arrive safely after 100-or-so minutes on board.

Given how stunning the film looks – both locationally and through the stunning HD transfer – it’s disappointing that more couldn’t have been devoted to the Australian scenery utilised for the film.  Despite a “Collector’s Edition” logline, Ticket To Paradise only comes with a brief quartet of extra features (each running no longer than 5 minutes) that touch on the evident joy it was to film.  Return of the Dynamic Duo is basically a care package devoted to the undeniable chemistry of George and Julia; Destination Wedding looks at the cultural respect devoted to planning a Balinese ceremony; Production in Paradise is essentially a tourism advert for the lush Queensland locations used; and Keep a Straight Face sees co-stars (and besties) Kaitlyn Dever and Billie Lourd talk about their friendship and how lucky they were to work together on such a paradisal shoot.

Ticket To Paradise is available to purchase on DVD and Blu-Ray now through Kicks.