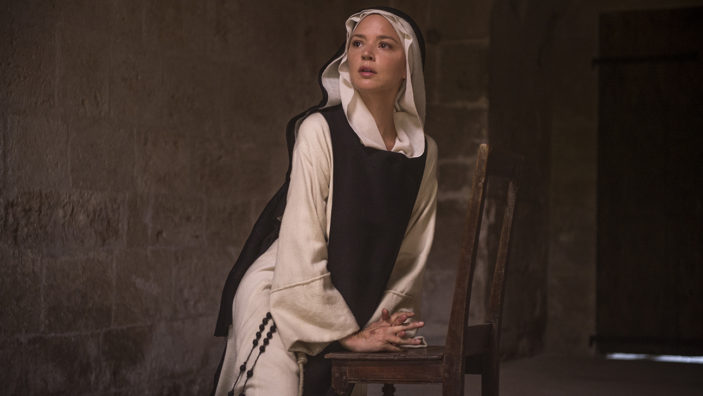 If there’s one thing director Paul Verhoeven loves to do, it’s poke the bear.  As he has so gleefully outraged audiences and critics across his career, his latest exploitive project – the “based on a true story” nunsploitation drama(?) Benedetta – could easily be dismissed as blasphemous, but there’s also an alarming sincerity to his approach, honouring his material or, more correctly, his femme blonde protagonist in a manner that suggests she’s more than whatever she is narratively shamed for.

Though Benedetta Carlini was in fact a real person – a mystic, lesbian nun, as she’s so described – Verhoeven and co-writer David Birke (Elle) opt for a more liberal, near farcical tone in their detailing of her frottaging.  As a young girl Benedetta believed she had a connection to a higher power.  When travelling to the nunnery a tribe of bandits confront her family, and when Benedetta prays to the Virgin Mary for help, a fluttering bird defecating in the eye of the bandit leader suggests her prayers are heard with eager ears; this sequence the first of many that leans into Verhoeven’s obvious comedic mentality.  Benedetta’s divine power and Verhoeven’s penchant for void-of-subtlety set-pieces continue during her first night at the convent when, praying to another statue of Mary, she’s unexpectedly pinned under the effigy when it falls from its pedestal, though, miraculously, she isn’t crushed under its weight; the stone bust’s exposed breast, however, inspires young Benedetta to instinctively lick it in her hour of need.

18 years on and Benedetta has blossomed into a sexual wonder of sorts.  Much like fellow Verhoeven lust objects Sharon Stone and Elizabeth Berkley before her, Virginie Efira owns her sexuality in her portrayal, turning aside any vanity and committing wholeheartedly to whatever degrading material she’s asked to.  And yet in spite of such material, most of which could be seen as vulgar and unnecessary, Verhoeven expresses a method to his “male gaze” that allows the female characters, especially Benedetta, to take back their seeming objectification.  It’s clear the filmmaker has been satirising the very institutions that oppose women’s autonomy for much of his career, and if you truly get this angle then the juvenile delights of the film appear less confronting.  Throughout Benedetta‘s 131 minute running time it indulges in erotic imagery, unexplained stigmata and horrific vocal possession, and confronting violence that ranges from the brutal (we witness one sister self flagellating herself) to the bizarre (Benedetta’s visions of Jesus speaking to her often result in him saving her from a threat of some sort, one being a trio of attacking snakes that allows Verhoeven to present Him as a sword-wielding slayer, because why not?).

It’s not just the stimulating titillation Verhoeven indulges in though, with the ambiguous nature of Benedetta’s supposed higher calling constantly being called into play, weighing in on the debate of faith through the representation of the Reverend Mother (Charlotte Rampling, adding significant class to the material).  She is never sure what to make of Benedetta’s claims, consistently wavering between viewing her as a saint and a heretic, forcing her to face her role within the Church.  It’s this plotting that, at times, upsets the film’s tone as the notion of questioning one’s faith isn’t taken lightly, but when placed within a narrative that gleefully fashions a Virgin Mary statuette into a sex toy – Benedetta and her young lover, Sister Bartolomea (Daphne Patakia), indulge in a slew of graphic trysts that speaks to the latter’s feral energy – it feels melodramatic and in danger of losing its gravitas.

Farcical and graphically sexual it may be, Benedetta can’t help but appear as a commentary on the mediated pleasure and in-house corruptions of the Catholic Church.  The violations and restrictions placed upon women within these convent walls feels far more violating than anything Verhoeven could muster – Virgin Mary-inspired sex device included – but, my word, he certainly is up for the challenge of doing so.  In typical fashion of the director, this is a film not for the faint of heart or easily offended, but those who have surrendered to his European sensibilities in the past and accepted his comical commentary should find the unbridled joy in his outrage.

Benedetta was originally reviewed last year in conjunction with its original international release.