Baby Ruby is a disturbing psychological drama about the uncertainty of new motherhood: TIFF 2022 Review 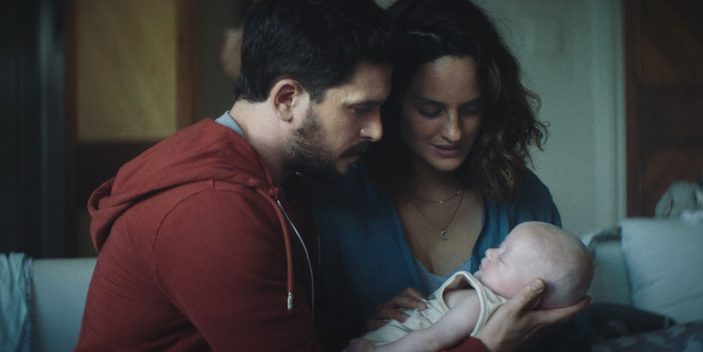 As much as this film titles itself after an infant whose actions drive much of its horrifically-laced narrative forward, it’s the newborn’s mother that earns much of the focus in Baby Ruby, an unsettling psychological drama from Bess Wohl, the writer/actress making her directorial debut here.

That mother is Jo (Noémie Merlant, best known for her delicate turn in Portrait of a Lady on Fire), a lifestyle influencer who with her husband, Spencer (Kit Harington), an “ethical” butcher, lives one of those aesthetically perfect, Instagrammable lifestyles that creates content purely to stir chaos into the lives of their followers.  Baby Ruby, however, has other plans.

There’s almost a villainy to the way Ruby is framed within Wohl’s story, seemingly torturing Jo from the inside out.  Jo is confused, but she thinks nothing of those initial moments of combative nature from within the womb.  It’s when Ruby is delivered and brought home that Jo starts to psychologically unravel, believing that her daughter is somehow disappointed with her as a mother; but how can such a thought process be true when the daughter in question is only days old?

When she goes to breastfeed her, Ruby savagely bites her.  Jo’s dangling earring becomes the perfect play thing for Ruby to rip from her lobe. The crying is constant whenever it’s Jo tending to her.  The signs all add up for the ever-frustrated mother, and her violent hallucinations towards Ruby only confuse her state more, but those close to her assure her that what she is feeling is perfectly normal; Spencer’s mother (Jayne Atkinson) tells a story that teeters between comforting and confronting when she recounts how her son was such a crier as a baby that she held a kitchen knife in her hand with the momentary thought of killing him.

It’s revelations like that – along with some truly disturbing imagery – that will no doubt shock unversed viewers, yet probably aid any mothers watching who had difficulties when it came to either bonding with their child or getting them to settle.  As Jo starts to distrust those around her Baby Ruby adopts an almost Rosemary’s Baby-meets-Stepford Wives mentality, leaving every scene on screen dripping in a lingering sense of unbearable tension as we are never entirely sure what moments are imaginary or reality.  Will the next moment Jo hurts her baby be the one that bleeds into her actual existence? We are never too sure, and it makes for unbearable viewing.

Whilst some could accuse the film of incorporating shock for the sake of it – one of the most unexpected jump scares features a woman throwing a baby at a car – Wohl is never operating with the intent of being mean or distasteful.  It may be a violent film, but it’s more thematically over graphic physicality, and it’s entirely commendable that Wohl places aim at such commentary on the lack of support for mothers through American employers.  Similarly, the veneer that comes with apparent mothered bliss on social media is put through the churner here, with Jo, whose whole existence is about projecting perfection, feeling uneasy about placing a baby photo on her blog amidst her breakdown; why should something so horrible to her be celebrated?

Likely to stick with you long after it’s finished, Baby Ruby is a more realistic view of maternal life, even if it’s being shown through an atmospheric lens.  Wohl’s ease at blending genres now sets a standard for her future work, and if she can illicit such a response from something usually doused in happiness and hope, it’ll be truly exciting seeing what else she can skewer that keeps us weary of solace.

Baby Ruby is screening as part of this year’s Toronto Film Festival, running physically between September 8th and 18th, 2022, and digitally (select titles) from September 13th.