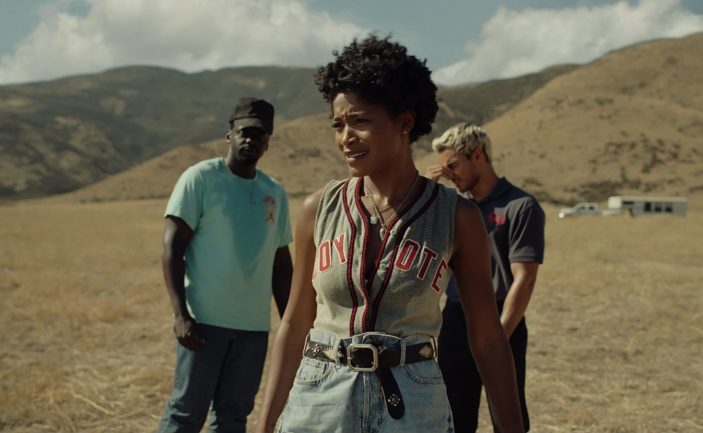 It’s understandable to be going into a film like Nope and be expecting horror greatness, given that it’s stemming from the mind of Jordan Peele, who, with both Get Out and Us, redefined the genre with his “woke” sensibilities and penchant for symbolism and commentary.

Ominous alien invasion is seemingly what’s promised here.  The trailers (at least initially, before the studio thought they were too ambiguous to sell tickets for) hinted at this UFO angle – though they’re called UAPs now – but, in true Peele style, there’s so much more to his narrative trajectory, much of which could prove Nope to be his most divisive film yet.

Following an opening image that suggests a brutal course of action is to follow and a brief sequence that lays the emotional foundation for sibling duo OJ (Daniel Kaluuya) and Emerald (Keke Palmer, firing on all enthusiastic cylinders), Nope‘s central relationship between the two drives the film towards all its plotted strands.

Falling on hard times in the aftermath of their father’s passing, introverted OJ and the more forthright Emerald have resorted to selling the horses the family trained for use in film productions, with local theme park owner Ricky “Jupe” Park (Steven Yeun) his biggest monetary provider; Ricky’s own horrific backstory as a former child actor who witnessed the mauling of his co-stars by an unbridled chimpanzee on his sitcom set serves as a mysterious subplot that initially feels untethered, before themes of respecting the animal kingdom and the price around exploitation become a clear intent on Peele’s behalf.

It isn’t long though before the skies above start projecting strong “we are not alone” vibes, with both OJ and Emerald convinced they have caught proof of otherworldly life, leading them to a famed cinematographer, Antlers Holst (Michael Wincott), they hope to recruit to capture said phenomenon; the siblings ultimately not working alone outside of Antlers’ assistance however, with Angel Torres (Brandon Perea, an absolute breakout), a tech salesman and extra-terrestrial believer, shoehorning his way into their plan after selling them a hoard of equipment.

Much like Get Out and Us, the less you know about Nope, the better.  Unlike those films though, this initially feels like a lesser film in terms of the strength of its commentary, yet in addressing the UFO’s behaviour, Peele delivers nonetheless an important message about the price of spectacle and predatory behaviour.  It may not feel as horrific comparatively, but on reflection – and, likely, repeat viewings – it achieves a terrifying relevance.

And though there’s obvious inspiration vetted throughout from bigger “alien invasion” efforts – Close Encounters… and War of the Worlds being two such clear references – Peele’s ability to merge genuine humour with such unsettling images leads to Nope being his funniest project to date.  It never makes light of its situation, but the simplicity in its title referencing a reactive response (Nope is not, in fact, an acronym for “Not Of Planet Earth”) speaks to the writer/director’s wit and the intelligence that he particularly bestows upon his African American characters regarding their retort to such situations.

Taking his biggest swing yet, Nope is sure to be an unexpected trip for audiences, both positively and negatively for anyone expecting something thematically similar to his last films.  This is big, compelling cinema that Peele expertly weaves blockbuster mentality and grounded terror together, refusing to sacrifice his unique vision in the process.  Cliché to say, but it’s a resounding ‘Yep’ here.

A gorgeously rendered disc that utilises Peele’s IMAX format during the latter half of the film with a changed ratio aspect, Nope‘s 4K enhancement is worth a purchase on its video quality alone.  Boasting a “Collector’s Edition” tag, the film has the usual suspects of extra feature in a gag reel and a handful of deleted scenes (all of which added nothing to the overall story), as well as insights into both the extra-terrestrial creation (“Jean Jacket”) and the mythology of the “godfather of cinema”, Eadweard Muybridge.

Whilst such a “Collector’s Edition” tag may have been more deserved through a commentary track from director Peele, the best extra on hand is the near-hour long immersive documentary that acts as a deep-dive into the filmmaker’s mind when creating Nope, his casting, narrative themes, working with IMAX cameras, and how he filmed the lush night scenes during the day.  It’s the type of well-thought out extra feature that used to make physical media such a must in the pre-streaming days, and for anyone who is interested in the inception of film, this disc is a need.

Nope is now available to purchase on DVD, Blu-Ray and 4K Ultra HD through Kicks.