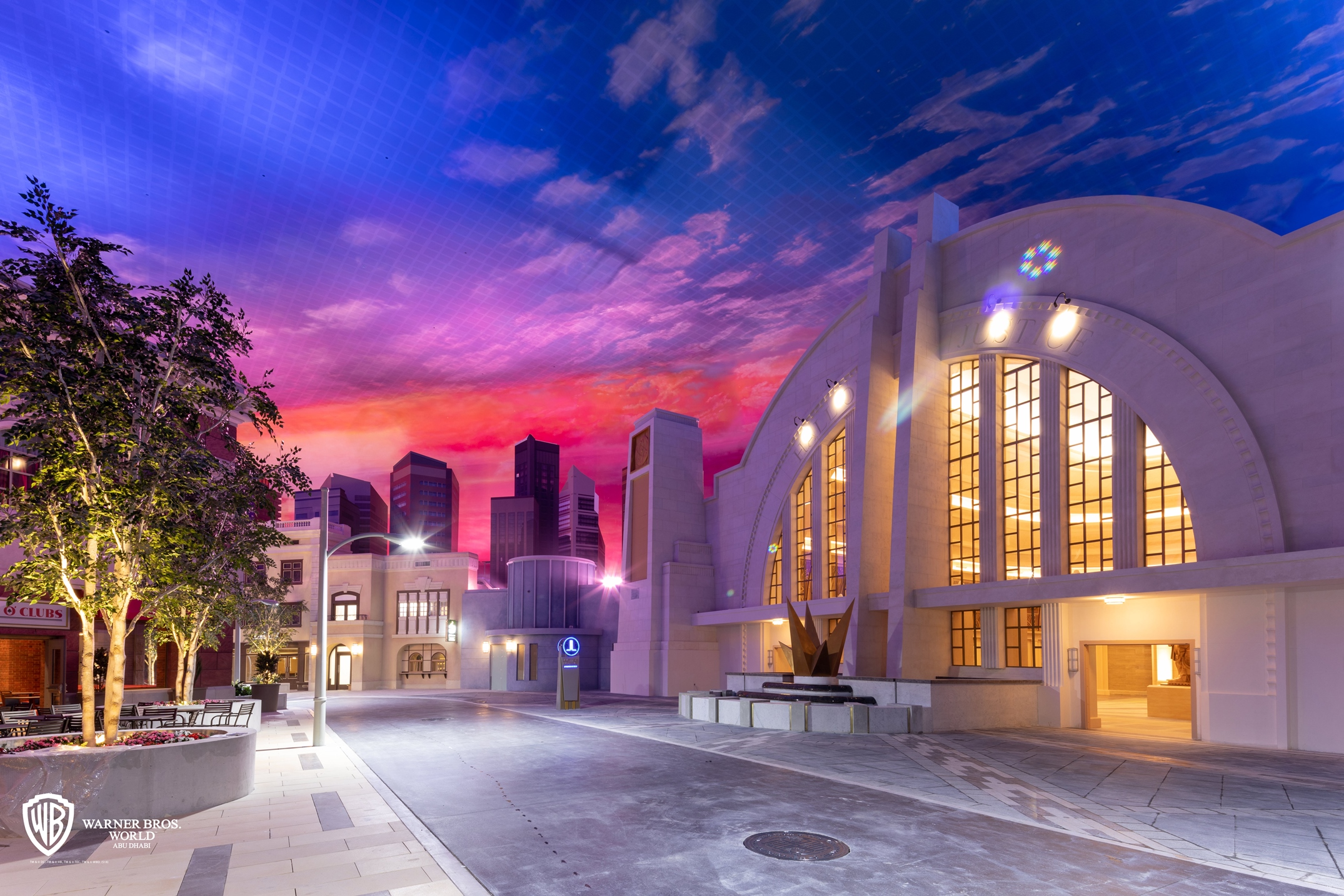 This time next week, the Warner Bros. World Abu Dhabi will officially open its doors to the public; a brand new, state-of-the-art indoor theme park set to feature six immersive lands, 29 rides, shows and attractions, dining options and all the usual trimmings you’d expect from a world class park of its kind.

While in Abu Dhabi recently, and ahead of the launch of the park, I sat down with Mark Gsellman, who has worked for some 45 years in the theme park industry. On this project, he’s the park’s General Manager and he told me, “I was grown and raised in theme parks, from cleaning stadiums for College money, to where I am today.” And these days he’s involved in the launch of new parks, “in the hotel business, they’d call the the opener,” he said. “I’ve done a number of openings of theme parks in my career, and one thing led to another and in 2014 I showed up here when (the block of land) was nothing but sand!” 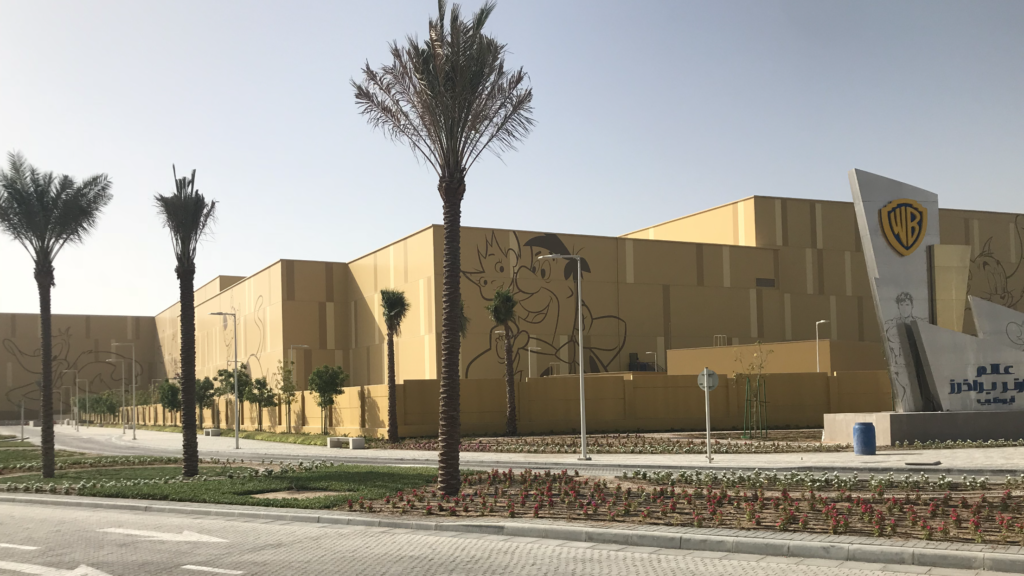 A quick look at the park from the outside shows off a building that looks less like a theme park, and more like one of the sound stages at the actual Warner Bros. Studios in California, which is a unique offering. Just getting to my interview with Mark reminded me of being on the same backlot – needing to be ridden from one side of the studio to the other via golf buggy just to have a meeting; in this case the sprawling offices actually sits above the park. 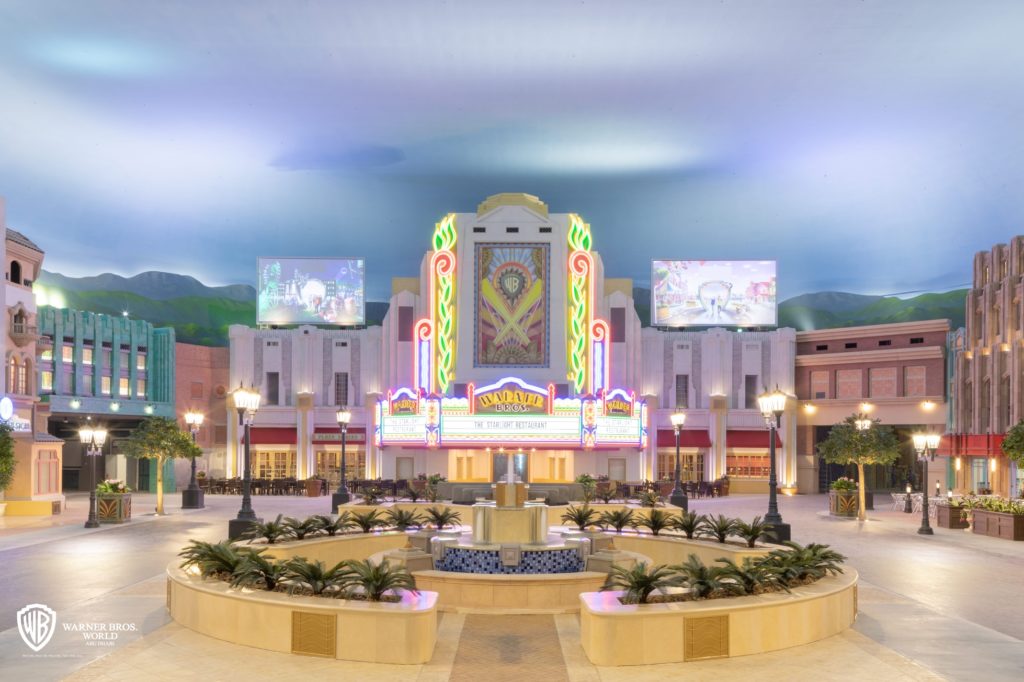 Of course this is in part due to the nature of having a park in the desert, and needing a park which could survive the elements both from a technical level and for the comfort of its guests – but it also ensures a certain quality in the experience you won’t find at competing parks, nor even at parks within the same universe – such as the Warner Bros. World on the Gold Coast.

“I’d say it’s definitely unique in the world, not that I’ve been everywhere, but I can’t think of any other parks on this scale that are fully immersive, fully indoors… the construction is such that every inch has been built with meticulous detail,” said Gsellman. “Gotham is Gotham City, Metropolis is Metropolis. There is not a square inch of the facility that isn’t themed. And we can control lighting, sound, temperature… we control everything that we want to. So the whole park produces its own show almost.” 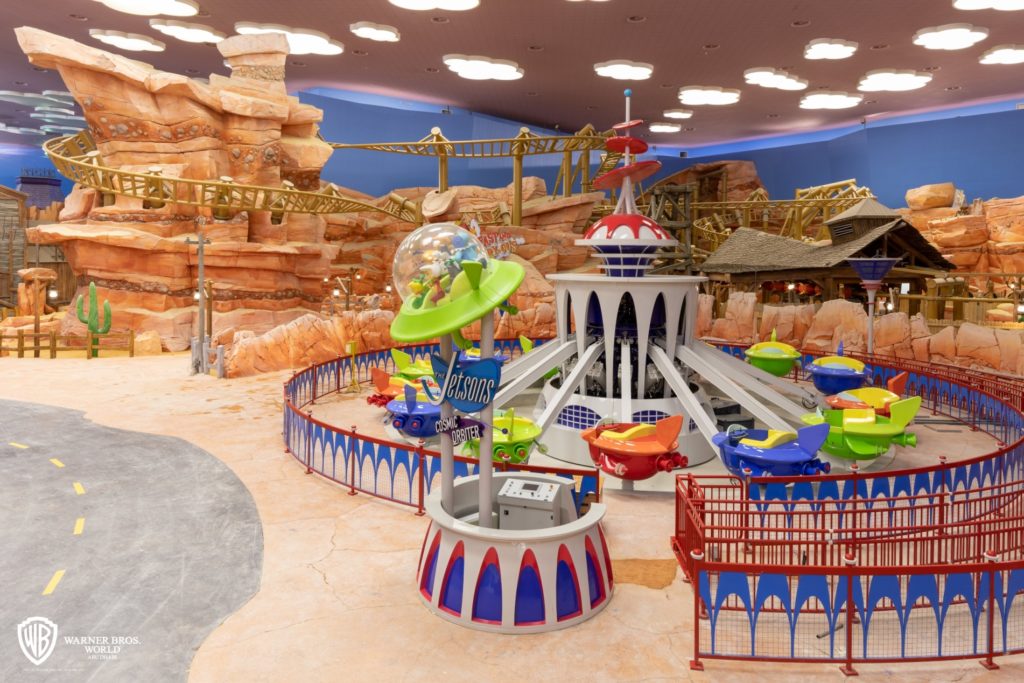 And to achieve this, Warner Bros. have been involved every step of the way; this isn’t a situation where the Warner. Bros IP has been slapped on top of existing IP, such as at the Six Flags Theme Parks in America. Warner Bros. have their mark on every aspect of the building and the park that sits inside it.

“The partnership with Warner Bros. has just been fabulous, they’re have people here in one form or another every day. Every square inch of the park they’ve blessed, approved, given their art direction. They’ve made sure Bedrock (the iconic town from The Flintstones) looks like Bedrock; we’re even training staff to say “Yabba-Dabba-Do!”. They’ve put a lot of sweat and blood into this park so to speak, and it shows, all the way down to what the dishes and wrappers on the hamburgers look like in the food areas. They make sure it’s true to the comics. True to the media that’s surrounding it. It’s a beautiful park, and an impressive one. I’m really looking forward to introducing it to more than just a few people.” 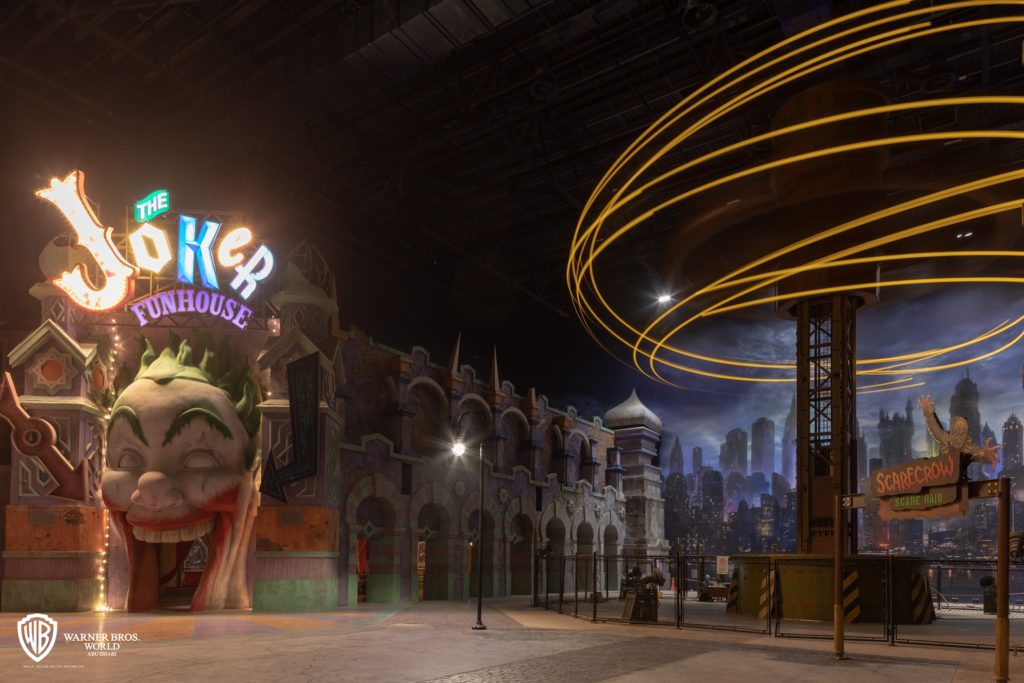 In terms of the technology we can expect in the rides themselves, Gsellman promises a state-of-the-art experience, “we have large 90 capacity theatres, with high definition video, 5D effects, those kinds of things… so the rides are very much the hi-tech experience… as is the show production, sound, music, all of that. We’ll have wi-fi too running through the park, and it’ll be a park that you want to run around and play in.”

And though some of the initial images suggest the rides weigh on the family friendly side, Gsellman promises this will be a park that offers a wide appeal. “We have rides for toddlers, teens, couples… I think we appeal across a broad span of ages, all types of people. I’m a comic book fan from way back, and probably the oldest person that will come see the place! Though it’ll be interesting to see the interaction between the characters and the guests. When we went to the Travel Market here in Abu Dhabi, we thought the business guys in suits wouldn’t be interested, but there they were wanting to get a selfie with Batman. People really are enthralled by this brand. So I think we’ll appeal to a broad spectrum, though we have concentrated a lot on making sure that it was family friendly… that the ride restrictions are such that if you’re a child at least 1.1 metre in height, and have an adult with you, you can ride all but two rides in the park.” 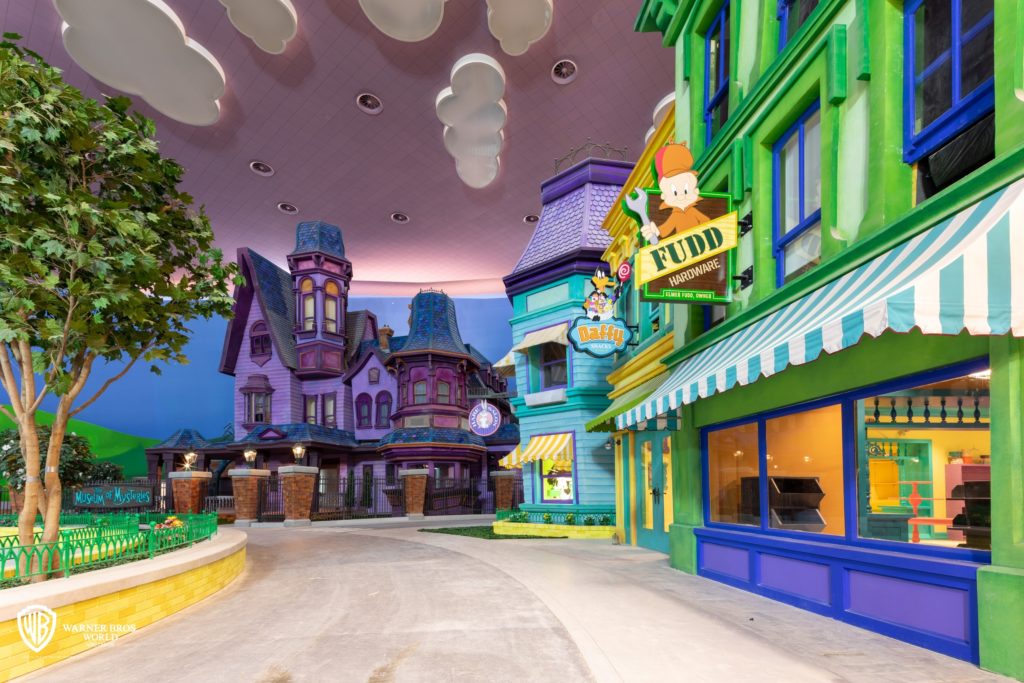 So let’s talk about those two rides. First, there’s the “Batman Knight Flight” ride, which is “quite a dynamic ride… its profile is going to be quite exciting,” said Gsellman. Indeed, the ride looks like a heap of fun, with the website describing it as “a high-speed, high-octane ride through the dark skies of Gotham City, full of breathtaking climbs, drops, spins and rolls,” and the accompanying imagery seems to indicate it’s a motion simulator ride – kind of like the Simpsons ride at Universal Studios – but you’re hanging through the experience, like in the “Soarin'” experiences at Disneyland.

“And then the other ride is the Tom & Jerry Coaster, which because of the spinning nature of the ride has the restrictions. But don’t get me wrong, the rest of the rides are exciting too, they’ve just been designed in a way that the smaller children, because of lap bars and seat belts, can ride them.” One such ride is surely the Riddler Revolution, a spinner roller coaster which by early indications from a recent soft opening is a highlight of the park. You can see it below on the right. 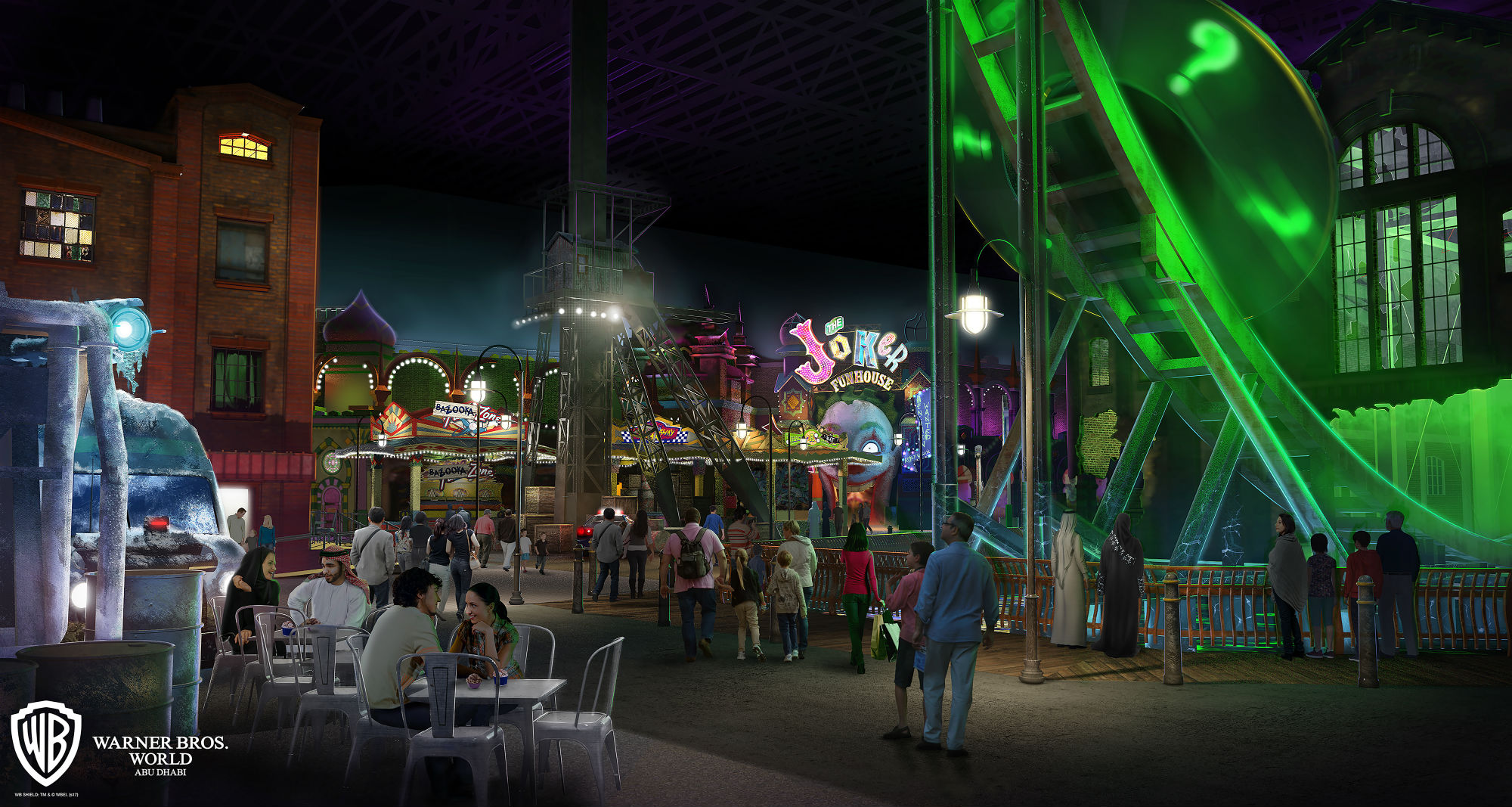 But surely one of the difficulties of the park will be in expanding – something that’s essential for the growth of a park; there are literal walls keeping the park to its current size. But Gsellman assures that there are plans for expansion. A Warner Bros. themed hotel will be built pretty much outside the park, and a “City Walk” will also debut later down the track. And as for the park itself, “we have quite a significant amount of land around the park that’s been dedicated for expansion, so we should be good far into the future. The planners here are really good at leaving room for things to develop, and looking at things from an overall global standpoint as far as the island development goes, city development… they’re master planners here.”

This island he speaks of is Yas Island, which is home to the park and giving Gold Coast a run for its money, with WB World sitting next door to one of the world’s best water parks, Yas Waterworld, which opened in 2013. Around the corner there’s the spectacular Ferrari World, which opened in 2010 and features the world’s fastest roller coaster. A brand new Sea World (and the first to open without an iconic Orca in residence – welcome news to many), will open up in 2020. And it’s also soon to be home to Clymb Abu Dhabi, featuring the world’s tallest indoor climbing wall. That is expected to open before the end of the year, as they look to make the area the entertainment destination of the U.A.E.

“It reminds me of Orlando back in the day”, said Gsellmen, “which just started with a theme park (Disney World) in the middle of a swamp. And now look what’s there now.”

Yas Island is right near Abu Dhabi International Airport too, which serves as the transport hub for Emirates Airlines, making this destination the perfect for a stop-over for a family or thrill seeker looking for an enjoyable way to pass the hours between flights; or as I did – give you an excuse to spend a couple of days in the Middle East. And that’s exactly what Gsellmen says they’re trying to do both here on Yas Island, and in neighbouring Dubai with the parks they’ve opened (The Marvel and Cartoon Network themed IMG Worlds of Adventure, Legoland and MOTIONGATE to name just a few)… enticing tourists from all over the world.

Warner Bros. World Abu Dhabi opens officially on 25th July 2018. For tickets and more details about the park, head to their official website. While in Abu Dhabi, we stay at the Marriott Hotel Al Forsan, a stunning hotel a short drive away from Yas Island.

Photos and composite imagery by Warner Bros. World, except for exterior shot, by the author.