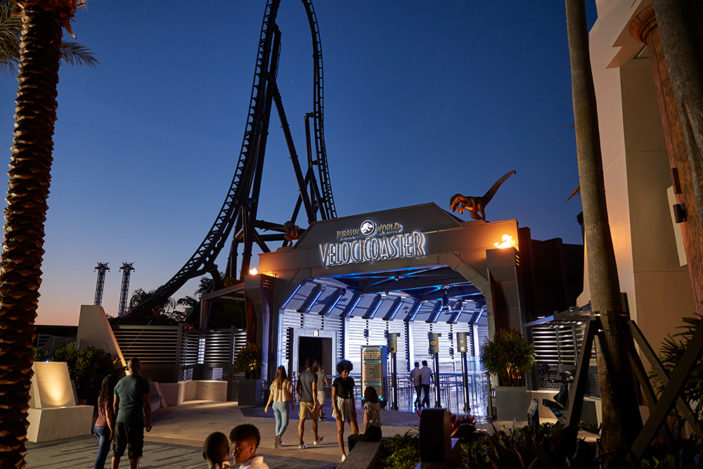 When Universal Studio Florida’s second gate, Islands of Adventure opened 23 years ago in 1999, it looked destined to be holy ground for roller coasters in Florida. I distinctly remember the TV ads showing The Incredible Hulk coaster weaving its way over the body of water that sits at the centre of the park. It looked thrilling, as did the Dueling Dragons coaster that saw two suspended coasters race side by side. These were, at the time, two of the biggest and best coasters to debut in Orlando – a town that historically saw tamer attractions.

But year after year, even in the face of the expansive Harry Potter land, Islands of Adventure didn’t add any additional coasters for thrill seekers*. Sure, their companion park next door got one, but as their focus turned to the impressive Wizarding World, Sea World Orlando, yes Sea World, picked up the slack, adding coaster after coaster to their park – helping fulfill the promise that Islands of Adventure had not quite delivered on. They even go so far as to brand themselves as the “Coaster Capital of Orlando” – and with their great run of coaster additions, they have every right to. This may also have something to do with them needing to change their image, but we won’t go through that here…

It wouldn’t be until June 2019 that Islands of Adventure would have their first ground up build of roller coaster since 2000’s family friendly Flying Unicorn*. To build it, they knocked down Dragon Challenge, the now dated ride (albeit updated for Wizarding World) that opened with the park as Dueling Dragons. And while the name of the ride – Hagrid’s Magical Creatures Motorbike Adventure – had some expecting an experience reminiscent of Mick Doohan’s Motocoaster at Dreamworld on the Gold Coast (in fact both rides were built by the same manufacturers, Intamin), what Universal delivered was, to this writer’s surprise, amongst the most impressive roller coasters ever. 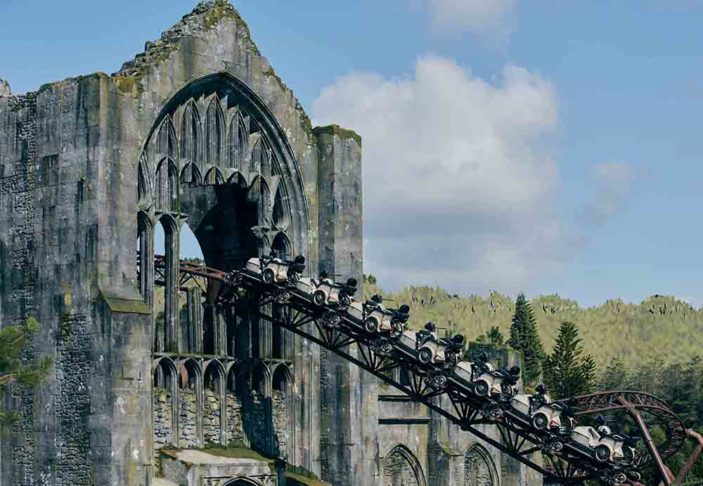 The ride is notable for a few things. Firstly: it’s massive. With a track sitting at a length of 5,053 feet (1,540m), and at a duration of around 3 minutes, it’s the longest outdoor coaster in Florida (only recently outdone by the indoor Guardians of the Galaxy coaster at EPCOT). Unlike many other coasters that feel like they’re over before they began, this one is worth every minute of the wait. Secondly: It’s the most expensive outdoor coaster ever built – coming it at around US$300 million.

It also holds the record for the most amount of launches on a single roller coaster (seven!!!). The ride has technically impressive drops, twists and turns that make you feel like you’re going faster than you are. Though the 50mph top speed is nothing to squawk at – and at one point, just when you think you’ve experienced all the ride has to offer, it goes from zero to 50 in 4 seconds – all synched up to audio from Hagrid on your bike and some amazing effects throughout the ride. 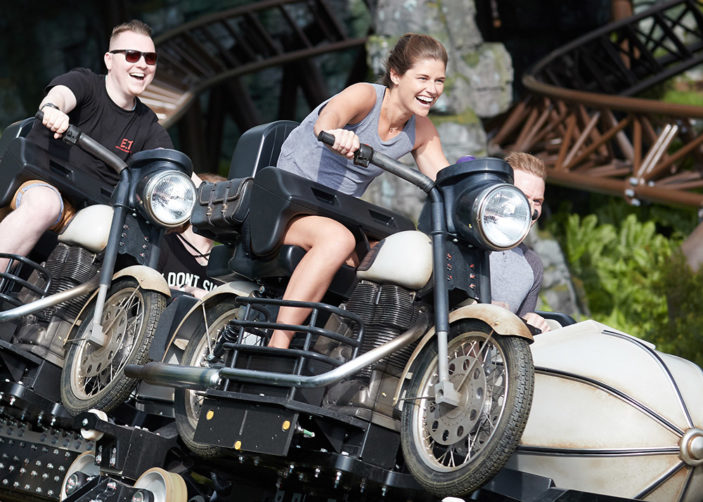 Everything about the ride is a technical marvel, and the experience is nothing short of thrilling and exciting. And given the lack of loops and topical “big thrills”, it will be one that you can convince more of the family to get onto. And just for the thrill of feeling like you’re riding a motorbike, or sitting in the passenger car, alone, they have achieved something really special here.

A couple of other things worth mentioning: They have a loading procedure similar to Disney’s The Haunted Mansion, which keeps things moving – and thankfully, Intamin figured out how to make their Motorbike concept comfortable, because anyone who rode the Motocoaster on the Gold Coast will tell you, that hasn’t always been the case. And though I only rode once as a driver, I hear sitting in the passenger seat is its own thrilling experience.

And proving they wouldn’t be waiting another couple of decades to add another coaster to the park, we’re excited to welcome the VelociCoaster; the first new addition to the Jurassic World/Park area since the park opened in 1999.

This sits as more of a traditional coaster than the heavily themed Hagrid, but still, the park does a great job to bring Jurassic World to life amongst the concept. No better is this seen than in the thrilling initial launch, alongside velociraptors on either side of you, while the ride is cleverly designed to hide some of its surprises ahead of you.

Without giving everything away in too much detail – it starts fast, but gets even faster (up to 113 km/h), features a barrel roll, a 30 m zero g stall, a 43 m drop at a 80 degree angle – and somehow it’s all done with a lap bar instead of an over the shoulder restraint – so you *really* get to feel every drop and turn as you lift out of your seat. 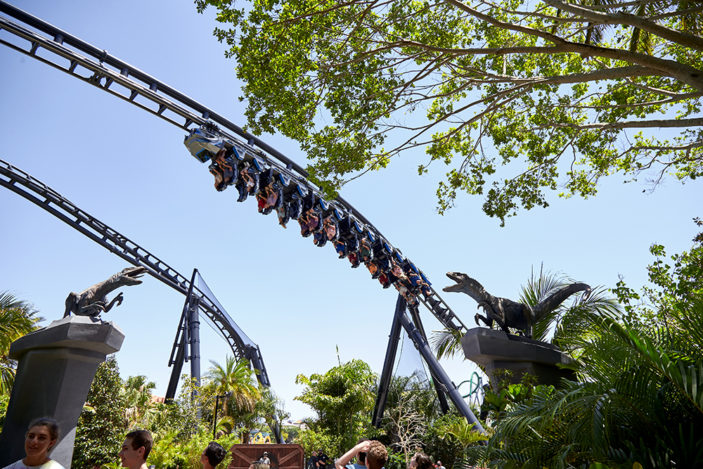 It’s without question one of the best coasters ever produced, and sits as the tallest and fastest coaster in Florida – another win for manufacturer Intamin, who seem to be the go to for Universal’s new attractions. And like Hagrid, it’s smooth, comfortable and thrilling from start to finish. While Hagrid will welcome a more diverse crowd (though will satisfy all thrill seekers), VelociCoaster is definitely for thrill seekers only – the first since the park’s launch ride The Incredible Hulk to fulfill that promise.

While no new Marvel attractions have opened in the park’s Marvel Super Hero Island since 2000 – which honestly seems a waste of the IP – the rides have enjoyed upgrades over the years. The Incredible Hulk remains a thrilling attraction and enjoys a number of upgrades from a 2016 reopening – with a score by Patrick from Fall Out Boy. Like VelociCoaster, it uses the lake at the park’s centre to its advantage, and adds some thrilling moments as you feel like you’re about to touch the water. It’s definitely not quite as impressive when put side by side with the newer attraction, but it remains one of the best rides in the park, and one of the best coasters in Orlando. 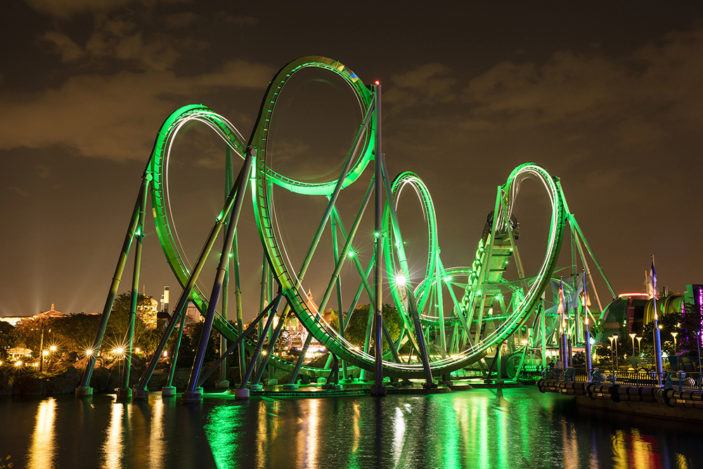 And it’s also worth mentioning that they take your thrill seeking seriously: You have to pass through metal detectors to get on the thrill rides at this park, so they know that you have put everything in the free lockers, and they won’t have to fish your phone out of the lake at the end of the day.

Here’s hoping this isn’t the end of Islands’ growth. The park could certainly find the room for another coaster or two – surely it’s time for Poseidon’s Fury to go, isn’t it? And I’d love to see more sitting over the water. But with their attention turning to the upcoming fourth gate “Epic Universe”, due to open on 2025, chances are this may be all for now. But in the meantime, with the latest additions, Islands of Adventure have secured their place as a must-visit park for thrill seekers and casual ride goers alike, delivering two of the best coasters, not just in Florida, but in the world.

Oh, and Hogwarts is there too. What magic! 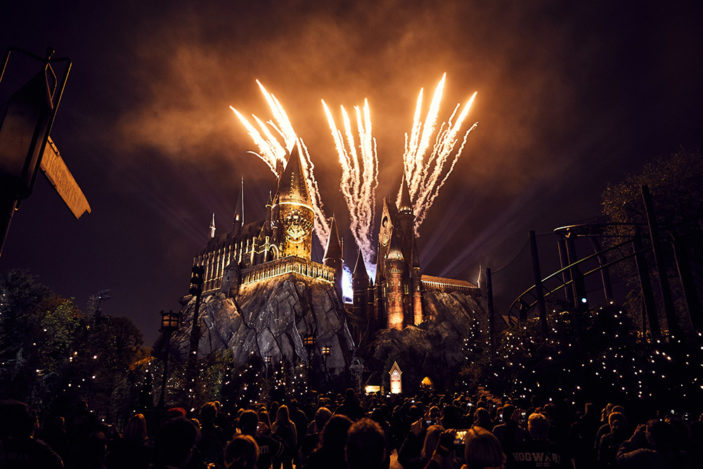 *We do not count Flight of the Hippogriff here, the family coaster in the Harry Potter area – it was, after all, an update of their 2000 ride Flying Unicorn.

Islands of Adventure is open year round in Orlando, Florida. For more details about the park, head to their official website.

The author attended as a guest of the park during the IPW 2022 event. While at Universal, the author stayed at the Loews Sapphire Falls Resort – a short boat ride or walk away from Islands of Adventure.