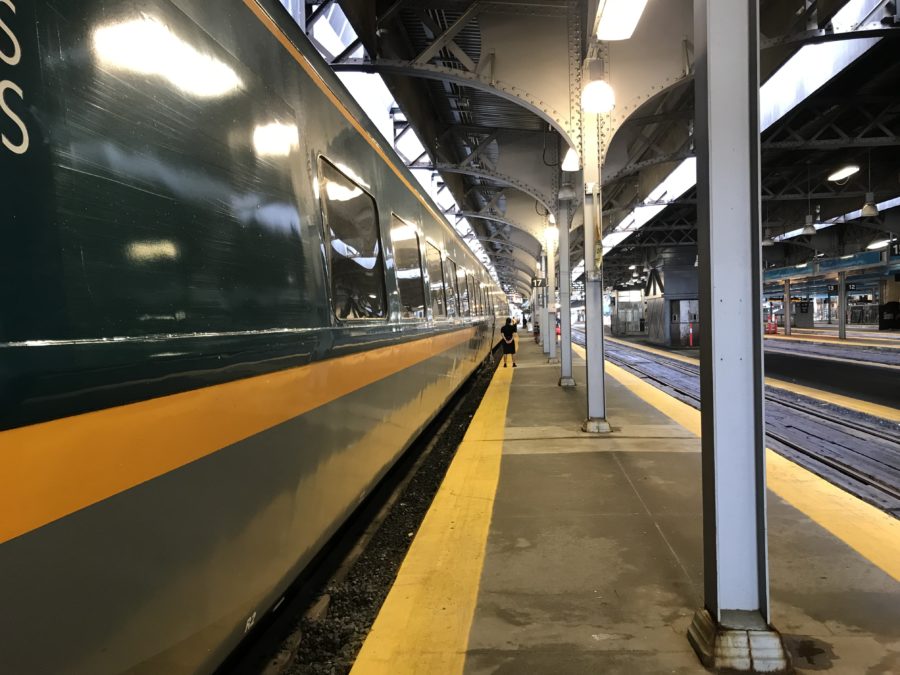 You may have heard over the years of the expensive nature of travelling around Canada, especially by plane. It’s a country where internal flights are almost entirely serviced by two airlines – Air Canada and Westjet – both of whom have a mixed reputation, especially when it comes to their ticket prices. And these are prices that don’t include luggage, seat choice or food. But travelling Canada by air isn’t the only way to get around.

A few weeks back, I travelled from Toronto to Montreal by trail, which takes around five hours by train. It was a last minute endeavour, and one that saw the hour-long flight sitting at hundreds of dollars. A quick look at the VIA Rail trip for the same date saw ticket prices at more than a quarter of their air rivals, and business class tickets, which include free meals, drinks and a less crowded carriage, were half that of an economy plane ticket. Yes, you could have the luxury of business class for less than what you’d pay to be crammed into the back of an Air Canada flight between the two cities.

This flight between Toronto and Vancouver is certainly more cost effective, and time effective – though the experience of riding in the glass-roofed “Canadian” train is its own bucket list experience that is in a league of its own. So let’s call this advice applicable for train travel you can knock out in 8 hours or less.

And let’s fact it – by the time you get from the centre of the city to the airport, clear security, get on your plane, exit out the other end and repeat the process, the difference between a “one hour flight” and a “five hour train trip” is actually pretty minuscule – especially when the train picks you up and drops you off in the centre of your respective cities. And it also opens you up to more transit options. To return to Toronto from Montreal, rather than make the trip straight through, I went via Ottawa, and enjoyed a couple of nights in the neighbouring city of Gatineau, on the Quebec side of the Ottawa River. And I did it all watching the world go by, scotch in hand, enjoying the incredibly beautiful Canadian vistas.

To give you a better idea of what the VIA Rail Business Class is like, here’s a more detailed look at that experience.

The experience at Toronto Union Station starts in the Business Class lounge, where passengers enjoy complimentary snacks and drinks, and can read the newspaper in comfort, before joining the queue to board the train. Sure, if you have an elite status with an airline you can enjoy the same at the airport, but this is in the terminal in the centre of the city, and comes at a much, much more affordable price tag. 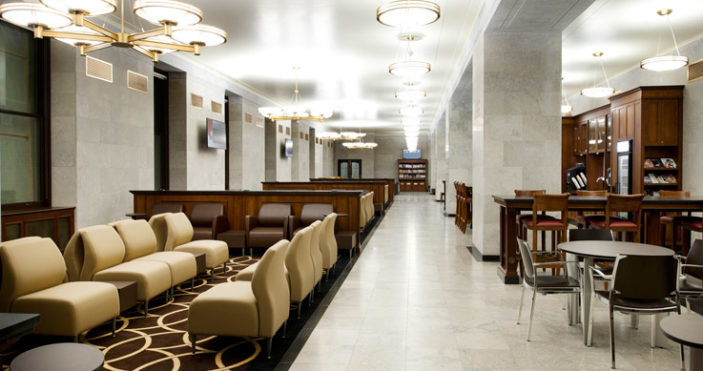 The service between Toronto and Montreal travels to Oshawa, Cobourg, Kingston, Cornwall, Dorwal and then Montreal. So basically you’re travelling along the water for most of the journey. Interestingly, on this trip, the train broke into two at one point, seeing select carriages head on to Ottawa.

The business class experience includes complimentary meals during your journey. A warm St-Viateur bagel was presented shortly after take off, with cream cheese or jam and butter. One of the quintessential treats from Montreal, your Quebec experiences started before we even left the Provence. Sloane fine teas were also served, or coffee, and juice. This would have been considered the “Breakfast” portion of the trip.

Not unlike air travel, you may ensure some delays on the way, and on this trip, in addition to the brief wait when the trains separated, we had to stop for almost an hour in Kingston, which is the halfway point of the five hour journey. But it did give guests the chance to stretch their legs and for us to enjoy a drink and a snack (some nuts) ahead of lunch service. 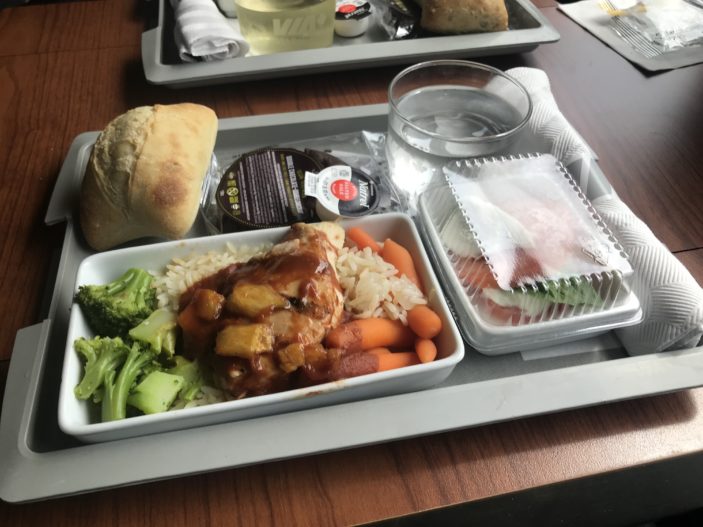 There were three options (unless you’d pre-ordered something based on dietary restrictions), a vegetarian pasta, a grilled chicken option or a salmon salad. Served with a warm bread roll (white, brown or olive), a caprese salad and a vegan double chocolate cookie. Wine or water also comes in a glass on the plate, and you can order spirits and other drinks. The grilled chicken came with a pineapple and BBQ sauce on rice with broccoli and carrots, and was my choice for the day. It was not unlike what you’d get on an airplan, though I daresay there was a lot more flavour to it.

The seat you enjoy is a comfortable one, too. You’ll find two plugs at your seat, and the ability to recline AND move the actual seat part of the seat in and out to fit the arrangement to your best comfort, which was pretty cool. I was seated opposite a stranger at the window in a 2-1 layout; us being at “1”, and had plenty of room to get work done, and rest if I needed to.

On the trip back, heading to Ottawa from Montreal, we were delayed 30 minutes or so on our departure, and enjoyed tea, coffee, juices and soft drinks in the Business Lounge. Announcements were regular, with delays notable across the network, but the seats in the Lounge were comfortable and the staff incredibly helpful. So we didn’t feel in any particular rush. With general boarding off gate 17, business class passengers were invited to board via gate 18. I had the same seat as the prior journey – 9S. Nuts and the first beverage was served before we’d left the station, and we were to make three stops in between the cities.

This time, cod, pork or vegetarian pasta were the options for food. The cod came with a sweet chilli sauc, bok choy and rice, and on the side was a warm bread roll, a grilled chicken salad and a bit of cake. There was also a Theobroma dark chocolate with raspberry chunks provided a little later. Which I highly recommend to finish off any meal.

The same meals were supplied on my journey from Ottawa to Toronto a couple of day’s later; this time I had the pork, which was slices of Porchetta with a egg and potato frittata and green beans with a tomato sauce over the top. A decent meal indeed. More drink services were supplied, and there was only a 15 minute delay en route, but otherwise it was much the same. It truly was a consistently pleasurable experience.

The author travelled as a guest of VIA Rail. To book your next trip with VIA Rail, head to their official website. While in Gatineau, we stayed at the Crowne Plaza Gatineau-Ottawa. Photos by the author except the Business Class Lounge image, provided by VIA Rail.