The Day Trip to Niagara Falls from Toronto, Canada (Part One)

Niagara Falls. The name alone conjures up a sense of mystic beauty, let alone the magnificent splendour that awaits its onlookers. So when I was given the opportunity to spend a day at the iconic natural wonder, following a week in Toronto for Canadian Music Week, it was too good an opportunity to pass up.

Having relied on public transport during my stay in Toronto, I kept on the same path as I made my way to the Falls. Unfortunately, a 10k marathon through the streets of Toronto meant that my early morning, two-plus hour journey via Greyhound would be delayed by over an hour. A frustrating start for any day trip and this was no exception – I would be returning to Toronto and flying back to Australia the very next day. Needless to say, the clock was ticking and I wanted to fit in as much as I could. As you see, it turns out there’s a lot more to do at the Falls than just take a few selfies as you get covered by its mist (though I’m particularly proud of this one). 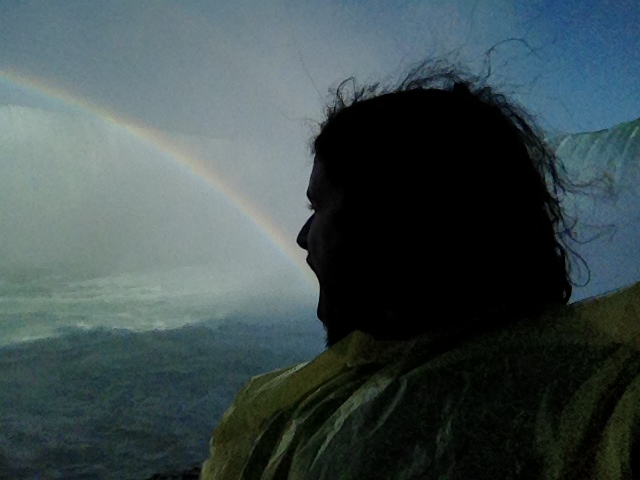 The journey to Niagara, though delayed, was an easy one. The weather couldn’t have been more beautiful, and the ride via Greyhound served as an excellent way to see the terrain of Canada away from the relative concrete jungle that is Toronto. The most surprising thing about the journey was the amount of wineries I saw along the way. I turns out the region is well known – at least in this part of the world – for its wine. I would later enjoy a Niagara Chardonnay and must say it was an decent drop.

On arrival, I was kindly taken to my hotel from the Greyhound Station – the exquisite Hilton Hotel that is – where even on the 41st floor the roaring sound of the falls could be heard through the thick glass. It was here I caught my first glimpse of the falls, and it would be an amazing sound to both fall asleep and wake up to, in what may have been the most comfortable bed I’ve ever slept in (you can find a full review of the hotel HERE). But then again, I had just spent a week at a music conference… 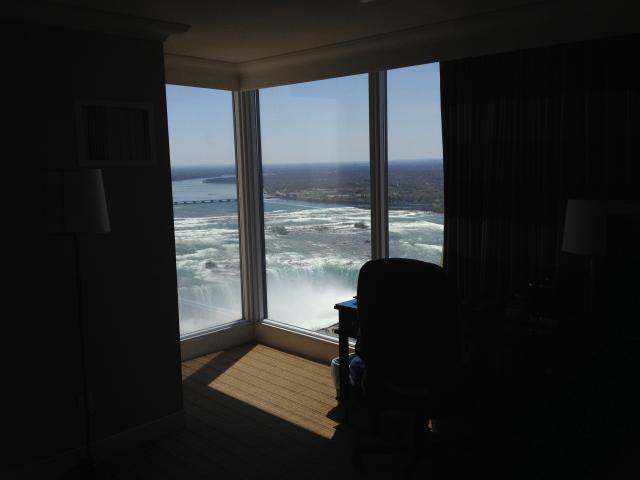 But the relaxing part of my trip would have to wait – as I viewed the falls from the relative calm of my hotel room, the excitement of getting up-close-and-personal was palpable. Armed with a jam packed itinerary and an fast running out of time to get it all done, I skipped lunch, wasted no time and made my down to the falls.

The roaring sounds get louder and the breeze gets colder as you approach. Slowly the mist starts to cover your glasses as rainbows form around you. Even in May (after the particularly cold winter of 2014) while the weather is a beautiful 22 degrees Celsius, piles of ice still litter the edges of the falls and you have the sensation of going up a mountain, covered in snow, rather than descending into the rivers below. The climate is its own unique beast down here.

You’re also in a unique position geographically. There are actually three falls which collectively form one of the most magnificent waterfalls in the world. First there’s the Horseshoe Falls – also known as the Canadian Falls. This is the largest and most powerful of the three, and easily the most well known with its unique curved architecture (pictured several times above in this article).

Then there are the American and Bridal Veil Falls, pictured below, which are accessible only from the New York side of the river and iconic for its mountain of rocks beneath. The American Falls make up the large volume on the left, while the smaller Bridal Veil Falls you can see to the right, separated by Luna Island. The Niagara river itself, which the falls feed into, serves as a divider between the US and Canada. On each side, unique “falls activities” are offered, alongside hotels, casinos and family-friendly activities that makes the Canadian side, at least, sit somewhere in between the experience of Luna Park and Las Vegas. 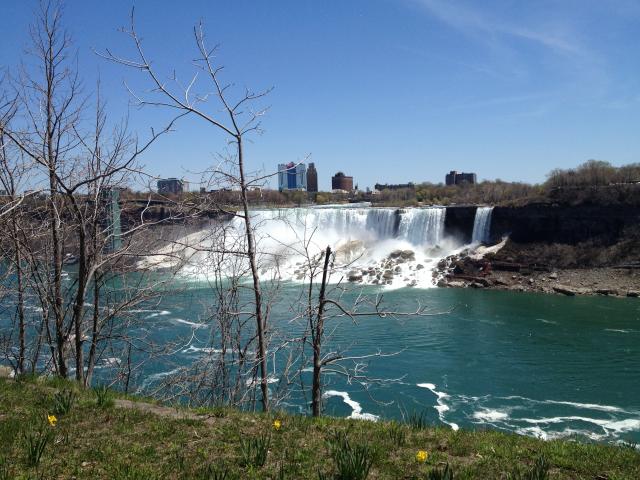 On the American side, the “Maid of the Mist” boat trip is something that it’s particularly famous for. Though the Canadian side offers a similar experience in the new “Hornblower”, it’s the opportunity to go behind the walls – literally – that serves as the most exciting attraction. The aptly named “Journey Behind The Falls” sees you venture down 150 feet in an elevator to the base of the falls, with two outdoor observation decks (the earlier picture with the rainbow was taken on one of these decks) and two windows that allow you to look out through the falls.

Through these “portals”, you don’t see much more than the white of the water as it crashes down over the falls, but the sound is deafening and it’s experiencing this power that makes the attraction so worthwhile. And the yellow ponchos they give you on arrival are a must. Heavy mist surrounds you as you approach the windows, and of course as you head out onto the platforms below. 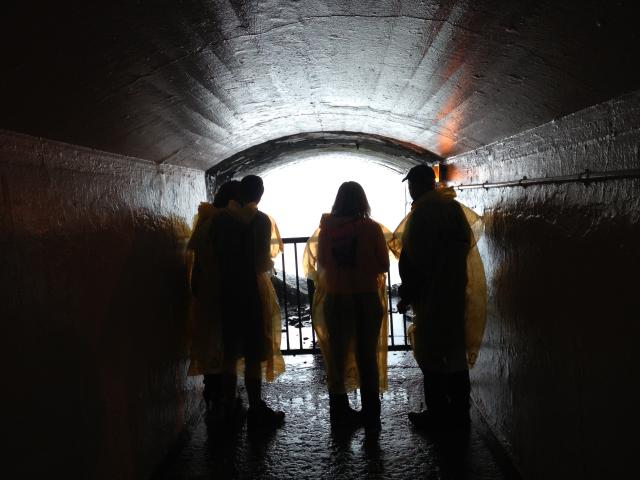 Admission to “Journey Behind The Falls” costs $15.95 for Adults and $10.95 for children aged between 6 and 12 years. Children under 5 are free. More details about the attraction can be found on the Niagara Falls Tourism Website. But this attraction is barely the start of the experience, and the Adventure Pass is your best bet to try and experience the best that the falls have to offer, with the pass giving you access to a bundle of attractions for $49.95, as well as two days of unlimited travel on the WEGO bus network – which was perfect for my brief overnight trip.

Unfortunately I wasn’t able to take advantage of this pass as it only became available the day after I left (as the new Hornblower service was not yet operational). I ended up as a result with the “Wonder Pass”, a variation of the Adventure Pass that caters for off-season travelers. In part two, I’ll look at what this pass got me and some of the other year-round experiences offered – including my first ever helicopter ride that (literally) gave me a birds eye view of the whole spectacle.

For better photos of the beauty that is Niagara Falls, head to Niagara Falls’ tourism website HERE. Niagara Falls Tourism kindly provided AU abroad with access to the activities mentioned in this article, as well as the hotel stay. Part two of this article series can be found HERE.

"There’s a lot to like about the soulful and warm Afterlife."

Ex-Olympian's debut solo album, #AfterLife, is out now. Ex-Olympian is the solo project of Liam McGorry, known for his work with Saskwatch, Dorsal Fins and Eagle and the Worm.

Borat has returned for #BoratSubsequentMoviefilm. Is it very nice or NOT!? https://www.theaureview.com/watch/film-review-borat-subsequent-moviefilm-thrives-more-as-a-real-world-commentary-than-it-does-as-a-crude-comedy/