Name any city around the world and you’re bound to find a cluster of its best hotels lying around the central business district or the bucketlist landmarks. Very few tend to play outside of these invisible borders, and when they do, they’re often of the “you get what you pay for” compromise. For visitors, this tendency limits direct access to a city’s best neighbourhoods.

Sydney’s Newtown was an example of this (another that springs to mind is San Francisco’s Mission district). Hostels and negligible backpacker nests scattered around the hip and happening strip of King Street (and Enmore Road), but aside from a by-the-numbers Rydges in Camperdown, there has never really been anywhere for visitors to stay, aside from Airbnbs. 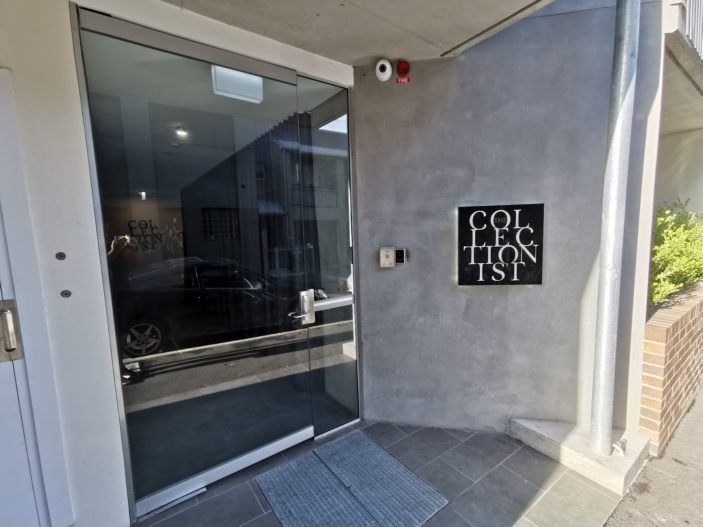 Enter The Collectionist: a small hotel with a big concept, settled into a quiet Camperdown backstreet almost directly behind the aforementioned Rydges. It’s part of the same group – Collectic Hotels – behind sister property The Urban on Enmore Road, which remains a remarkable example of transformation, pushing away from the building’s past life as an RSL and presenting a breezy modern hotel with a picturesque indoor lobby garden. And much like that property, The Collectionist takes some interesting turns to the standard lodging model.

It’s an intentional shift away from cookie-cutter, given that The Collectionist is essentially a series of ideas rolled into one. Each of the three-storey hotel’s 39 guest rooms were lovingly shaped by one of seven designers from local studios including Amber Road, The World is Round, Pattern Studio, and Willis Sheargold. Not only this, but numerous local artists came on board to collaborate with these studios and ensure each room told its own story and offered its own distinctive guest experience. There’s nothing quite like it, at least in Sydney.

There is a room shaped and inspired by a bustling African marketplace, one obviously sketched from Batman fan fic, and one evoking the Santa Rosa mountains in Palm Springs. All rooms are individually named – such as “The Santa Rosa Suite” or “La Cabine” – and each have placards by the door, detailing the designer/artist behind the idea, a brief, and two hashtags should guests want to Instagram – and they will – their stay.

Charmingly, the hotel also foregoes the traditional check-in process by leaving room allocation entirely up to the guest. Anyone checking in is invited to walk through the hotel and check out all available rooms until they decide on what’s right for them. Then a staff member simply assigns them a room code – their key – on a tablet and SMS’s them both their Wi-Fi code and the code to get into the building after hours. It’s awkward, given the hotel model we’re all used to, but it works incredibly well and the friendly staff make the quick process as seamless as possible.

Though each room has an individual theme, they are all curated across four categories, which are mostly based on room size and whether or not there’s an outdoor area. “Tinkerer” rooms, for example, are 31sqm Executive King Studios with balconies, while “Artisan” rooms stretch out to 42sqm with their own terraces.

For my one night stay, I chose a Tinkerer room – the aforementioned La Cabine.

The above quote is lifted directly from the room’s description, perfectly kickstarting a dark, moody stay curated by Willis Sheargold and bought to life with deep brown timbers, creating a fantasy that’s interrupted only by a modern kitchen and plain industrial ceiling. It’s eccentric alright, but the immersive quality is disjointed.

Like many of the better rooms at The Collectionist – it pays to show up before other guests – La Cabine feels like a true break from the typical hotel room. Though the kitchen, which leads to a small outdoor area, disappointingly takes on a more standard design, and the tiny bathroom plays it safe, the bedroom itself confidently pulls guests into the “log cabin deep in a French forest” fantasy and cradles them in a luxurious king bed. The lack of amenities may place this hotel as decidedly no-frills – you won’t find any television or mini-bar – but the smart design manages to find some luxury.

Being a small building, there’s no on-site restaurant for visitors to dine at. The narrow natural-stone “lobby” has a few bar fridges and cheese platters for guests to raid as they please, but you’re mostly left to fend for yourself when it comes to finding places to eat. That’s of course no trouble at all, seeing as you’re a 10 minute walk from King Street, 10 minute walk from Glebe Point Road, and about a 1 minute walk from Camperdown’s gorgeous Acre Eatery, where organic breakfasts and farm-to-table dinners feature produce freshly picked from an on-site garden.

As for suggestions. King Street is where you’ll want to be for the top picks, which include nearby The Imperial in Erskineville which hosts energetic Drag ‘N’ Dine nights and Veggie-forward dinners Wednesday to Sunday. Other essentials include Loaded by BL Burgers, where you can create your own custom burger from dozens of options; local favourite Belly Bao with its interesting Malaysian fusions and delicious baos; ramen haven Rising Sun Workshop; and Enmore must Stanbuli. If you like trying to imitate local life, pop into Newtown Hotel for a drink or hop between Enmore small bars Jacoby’s and The Midnight Special.

You won’t find an entire staff on duty at The Collectionist. Rather, expect to see just a handful of friendly faces milling about the hotel making sure guests have a comfortable and convenient stay. They’ll check you into your rooms, wave you towards free drinks and nibbles, and happily give some local tips to help explore Newtown – hint, book a street art tour with Culture Scouts on your first day.

With rooms starting at around $200 per night, The Collectionist sits between budget options and full-service with a comfortable offering. There’s a lot of value to be found, not just in the interesting concept and high level of comfort, but also the unbeatable location which, even though the address says Camperdown, is only a stone’s throw from the beating heart of Newtown.

The writer stayed as a guest of The Collectionist Hotel
.
Feature image supplied. Supplied images credited to Terence Chin Photography.