First Look: This abandoned 1962 TWA airport terminal in New York is now a hotel, and a living museum

“This is so incredible. I can’t tell you how much I appreciate them doing this.”, I heard a woman saying as I entered the new TWA Hotel at New York’s JFK, which opened yesterday alongside the modern Terminal 5. She said she used to work for the airline in the 70’s, and was wearing her flight attendant attire from that period. Her appreciation was present for a variety of reasons: the hotel’s attention to detail; the faithful restoration of a historic building that oozes nostalgia in its original design and the additions made to take guests back to a very different era of travelling (here, you can even visit the cockpit!); and the fact that this project will preserve the history of that era for generations to come. It’s a hotel. It’s a museum. It’s an experience.

There were many of her ilk enjoying the opening of the hotel this week in New York, and you could sense a general sense of wonder from those who remember the era and those experiencing it for the first time alike. Though her inclusion was exclusive to the opening festivities, its designers have endeavoured to create as much a living museum as a hotel, celebrating its history and creating a unique and unforgettable experience. Here’s a look at what you’ll find inside the terminal’s reopened doors…

Staff dressed in TWA attire greeted us at the entry, including, hidden behind the cars below, workers directing traffic in TWA jumpsuits and with those lights they use to direct airplanes after they land. 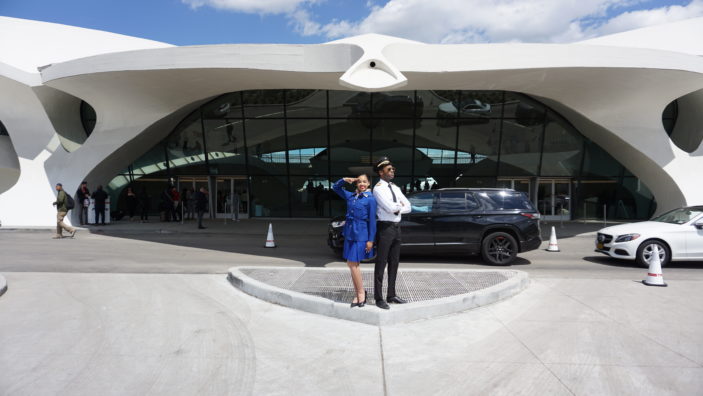 The design has kept the original features of the building intact; updated only in respect of making it look as new asp possible, and adjusting some of the fonts to be consistent throughout the building. 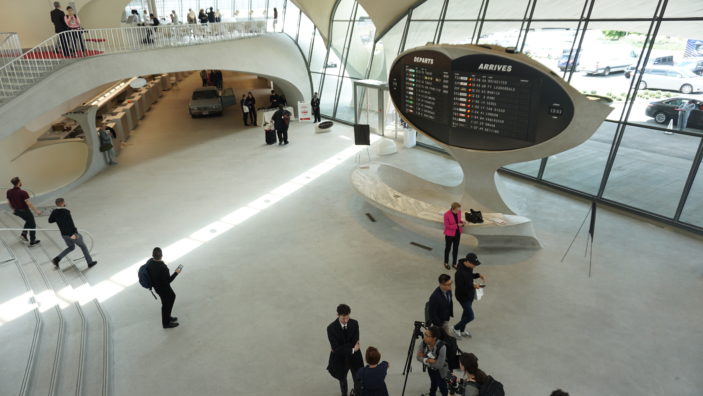 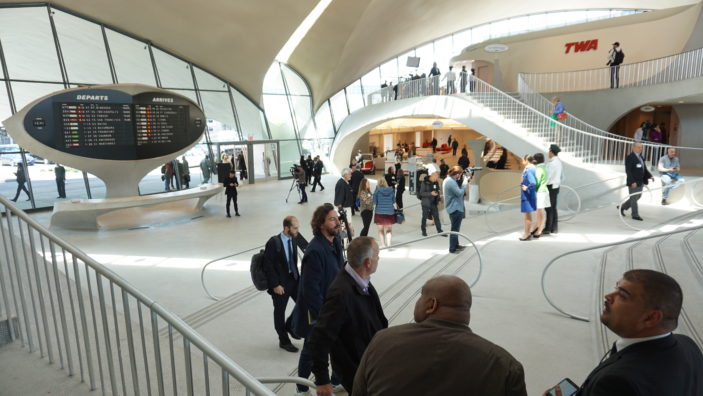 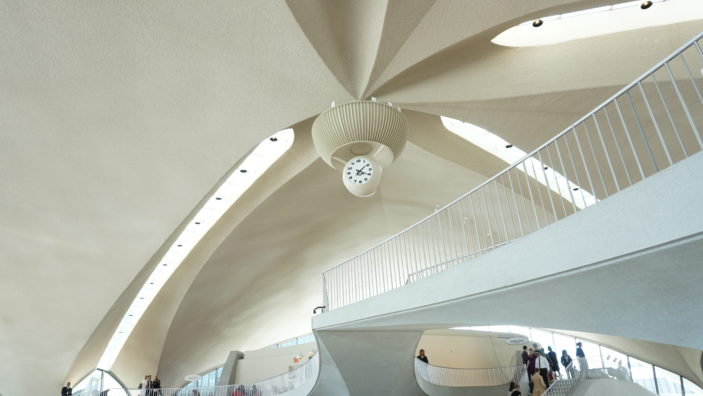 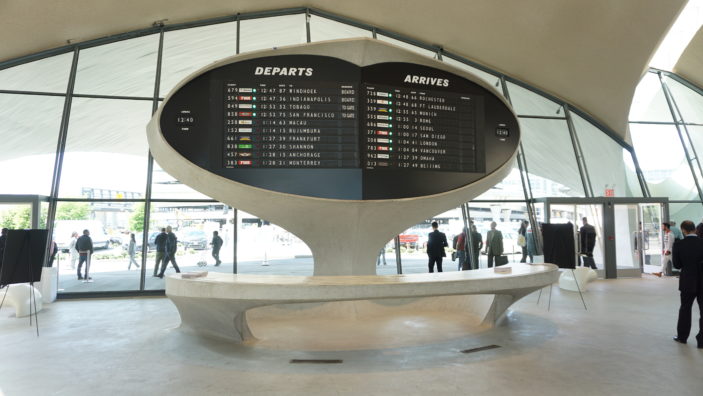 A walk across the tarmac out the back takes you to Connie, a restoration of a 1958 Lockheed Constellation airplane. 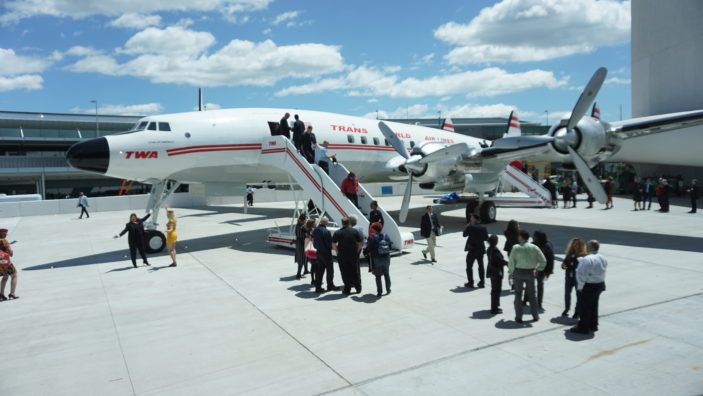 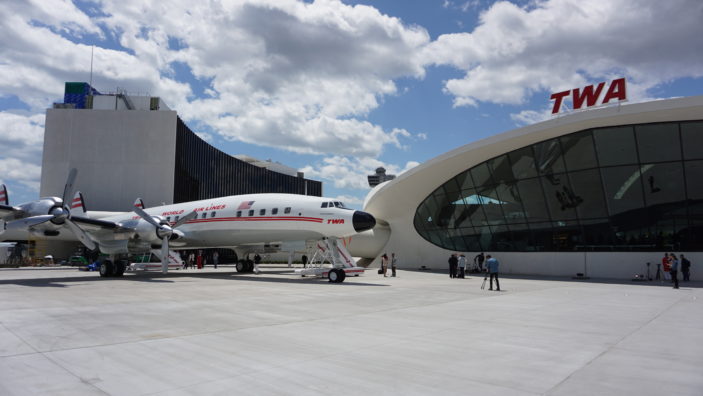 Inside, they have some original seats, as well as some stools and tables, as the aircraft doubles as a cocktail bar. 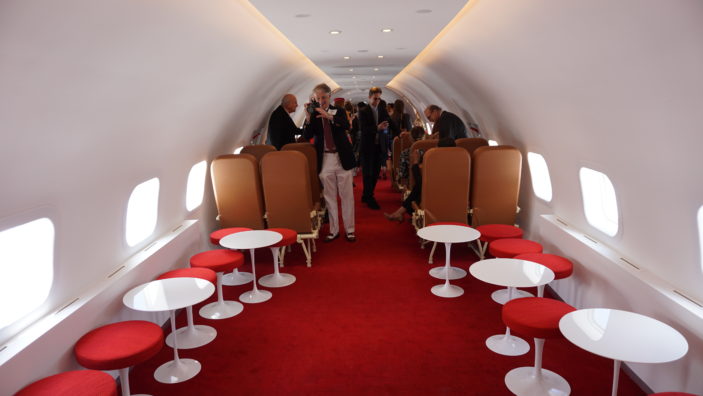 Guests can check out the cockpit while on board – something I have fond memories of doing myself on board flights in the pre-2001 era of travelling. 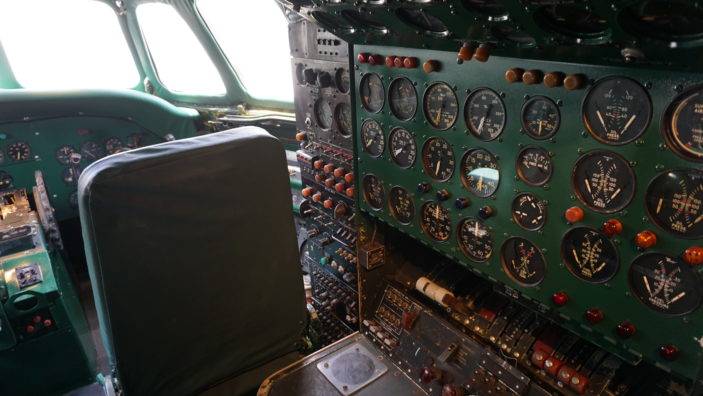 Even the manholes have unique artwork and serve as a celebration of the reopening of the building, “Built 1962, restored 2019”. 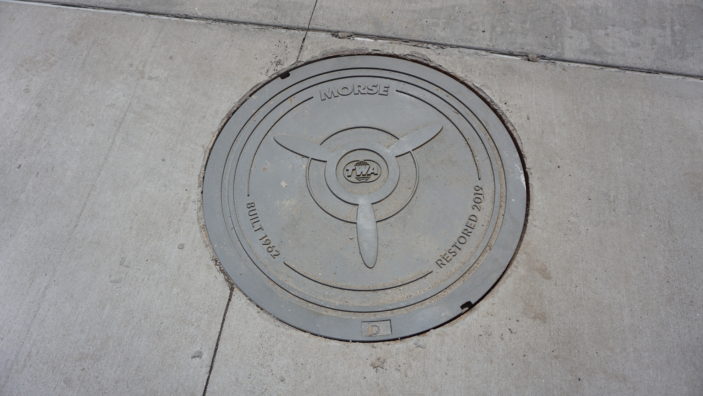 During the opening festivities, guests weren’t able to visit one of the 512 rooms which make up the hotel, but you’ll find them in one of two new buildings which surround the terminal. You can see one below on the right. It’s a curved structure with massive windows, through which you can get a glimpse of the luxury that awaits guests inside their rooms and suites. And on one of the rooftops of the hotel you’ll find a pool and an observation deck, where you can watch all the activities of one of the world’s busiest airports, JFK. 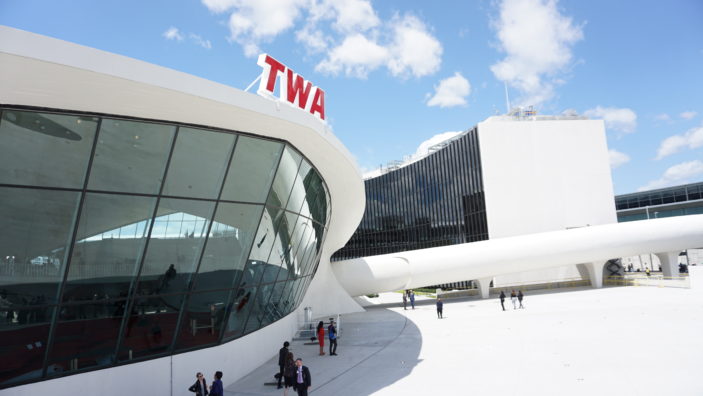 There are a number of dining options in the hotel, but the one worth most of a mention is the Paris Café. Here are some details about it: “Located in the heart of the 1962 Eero Saarinen-designed TWA terminal, the Paris Café by Jean-Georges encompassed the entire footprint of the terminal’s original Paris Café and Lisbon Lounge. The spaces were originally outfitted by famed Parisian industrial designer Raymond Loewy — the mind behind the 1955 Coca-Cola contour bottle, the 1959 TWA twin globes logo, the 1963 Studebaker Avanti and the 1962 Air Force One livery.” 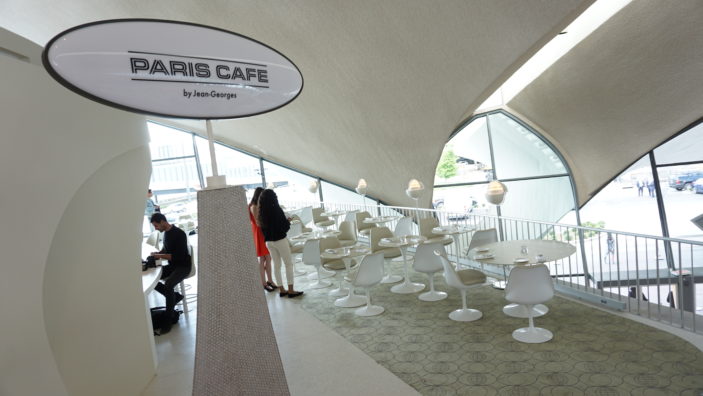 In 1964, the terminal saw the arrival of British music stars The Beatles, as they landed in the US courtesy of TWA for the first time. In tribute to the location’s role in musical history, a Beatles tribute act performed on the terminal’s iconic bridge as part of opening festivities. 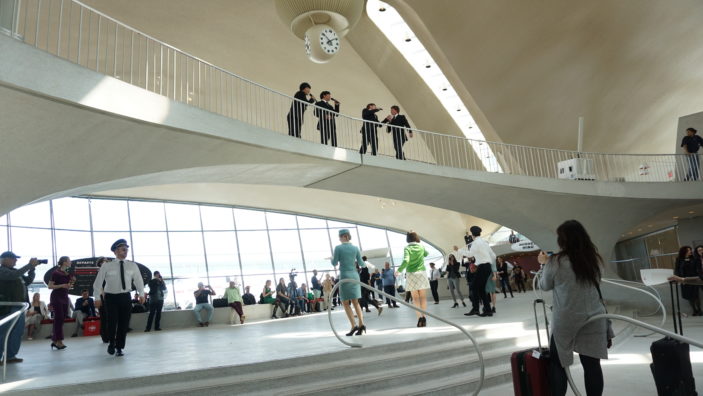 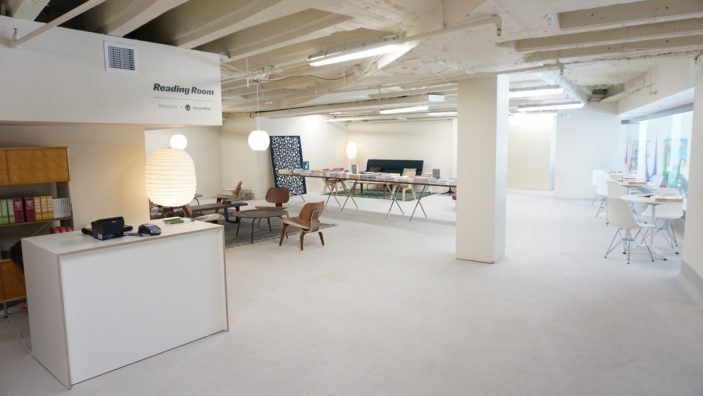 …while an old Chrysler sits by the check in counters, alongside an example of the luggage and luggage carts travellers may have used back in 1962. 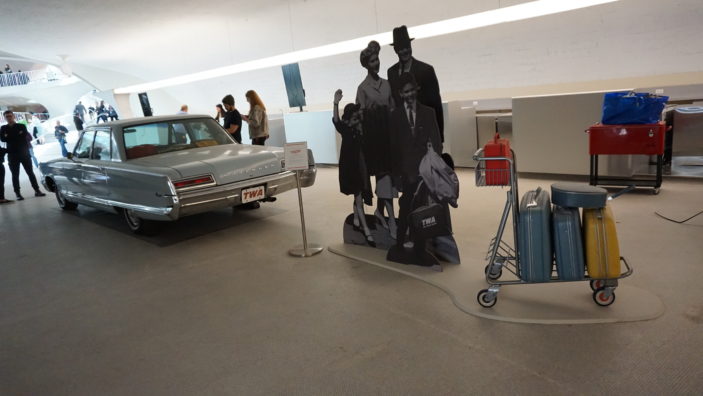 Also near the check in counters, you’ll find a coffee cart alongside some more classic vehicles… 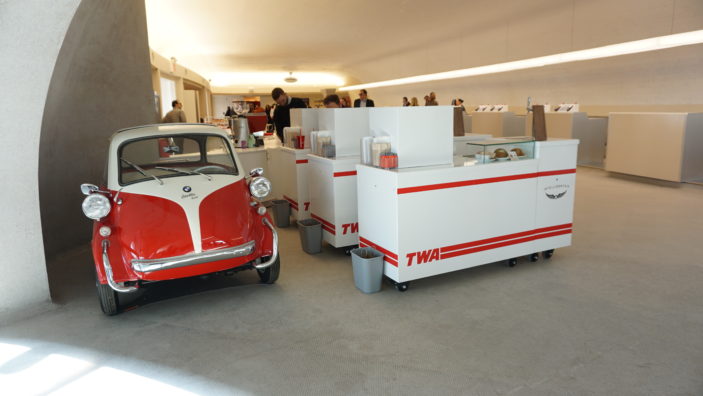 And the luggage conveyor belt still sits behind the desks! 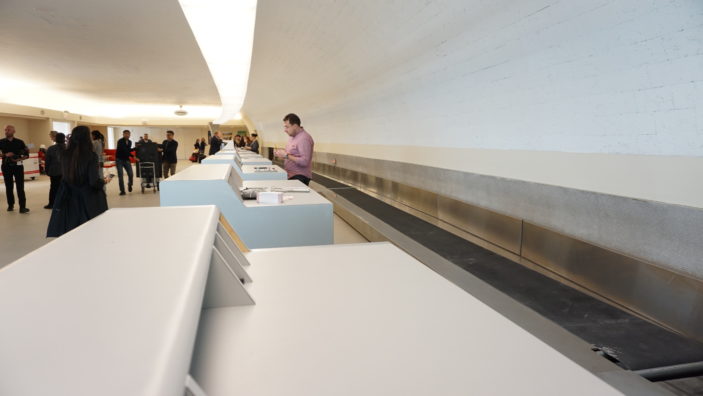 Make sure you look in any nook and cranny of the building – tucked away I found this colourful waiting room. 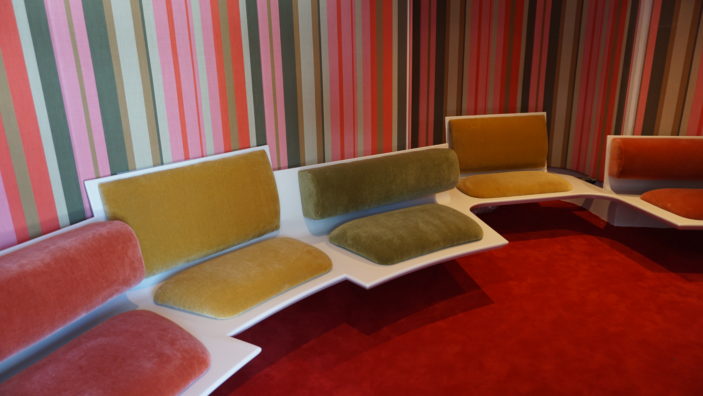 The terminal also doubles as something of a living museum, as the history of TWA is on display. Here, flight attendant outfits from the history of the company are on display. Some were designed by iconic artists like Ralph Lauren and Valentino. 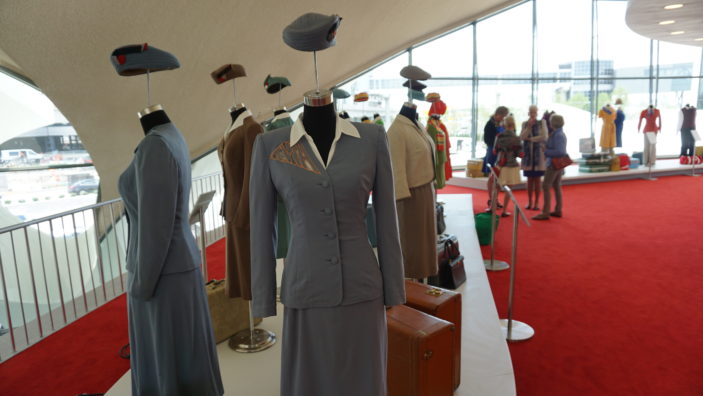 In one of the two wings, you’ll find a space dedicated to the terminal’s designer, Eero Saarinen, with the history of the building written on the walls, and a model of the building in the centre. 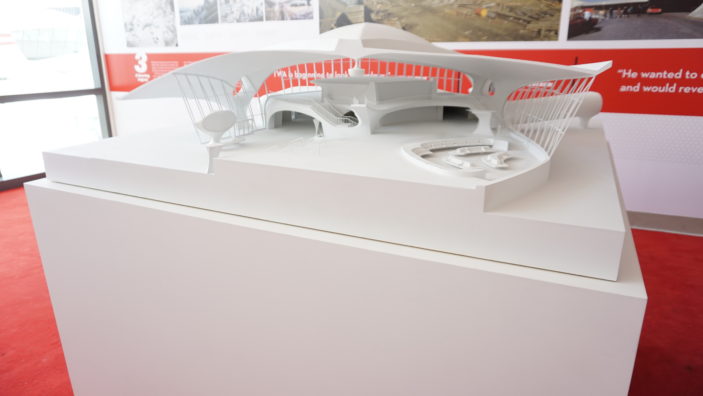 In the other wing, Howard Hughes takes focus, with his office available for guests to take a photo in (fake glass of whiskey and cigar and all), and more of the company’s history on its walls. Hughes ran the company from 1939 to 1965. 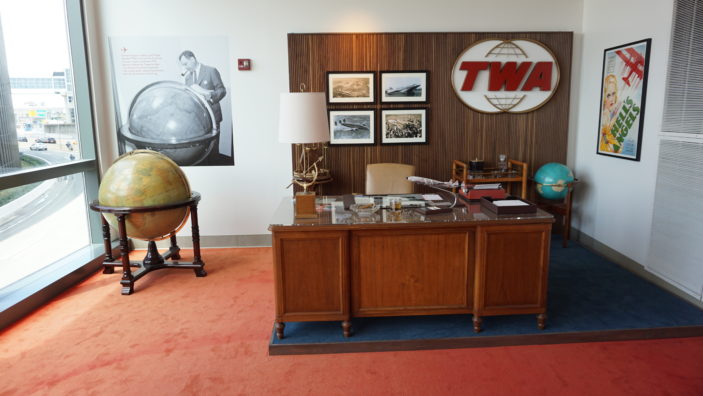 And these are the tunnels that take you to the wings… 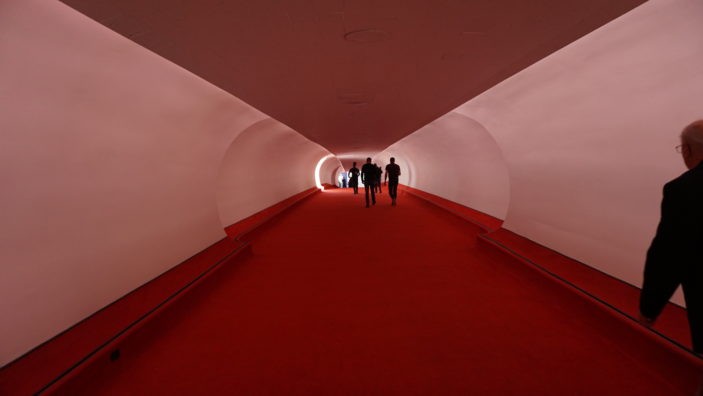 A hallway is filled with original TWA promotional posters. It’s hard to not want to take one home… 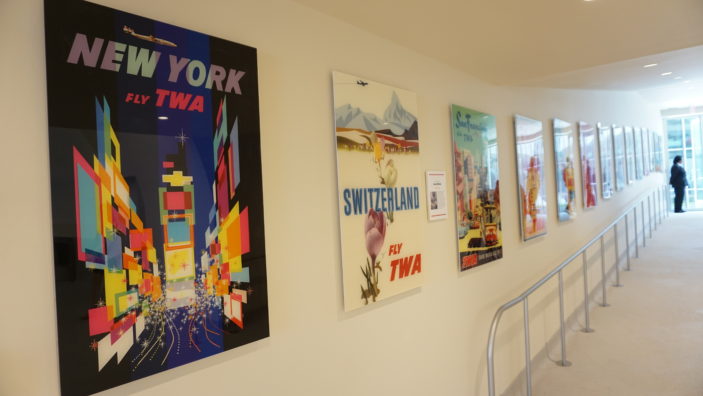 Thankfully, a TWA Store will give everyone the chance to leave with an assortment of TWA paraphernalia. 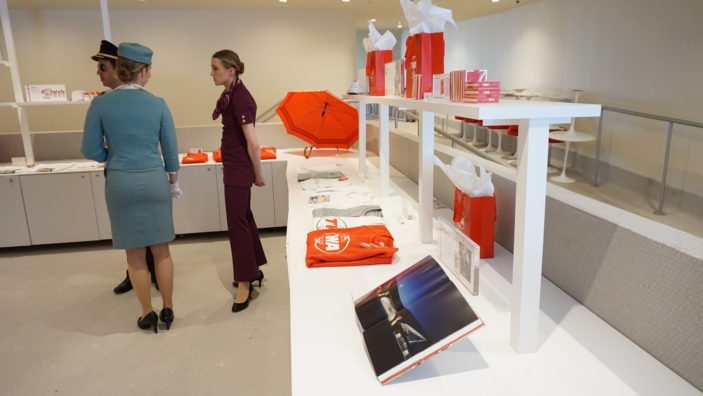 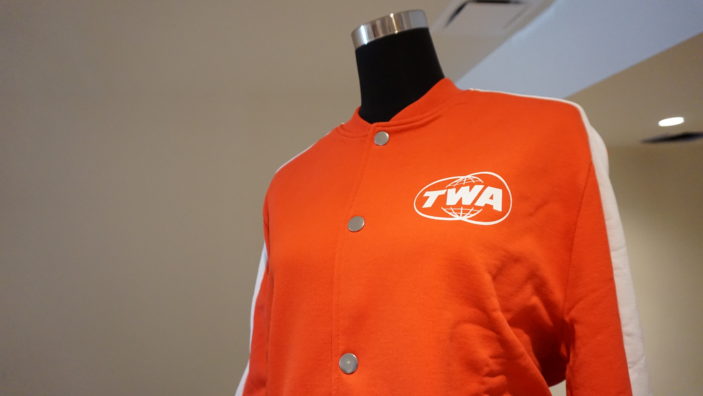 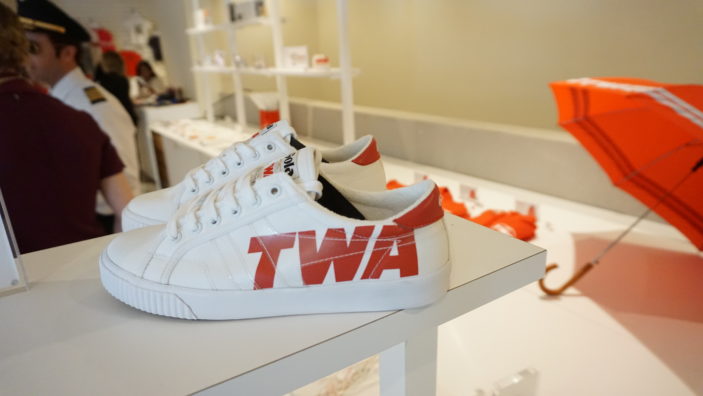 The TWA hotel is now open. For more bookings and more details head to twahotel.com.