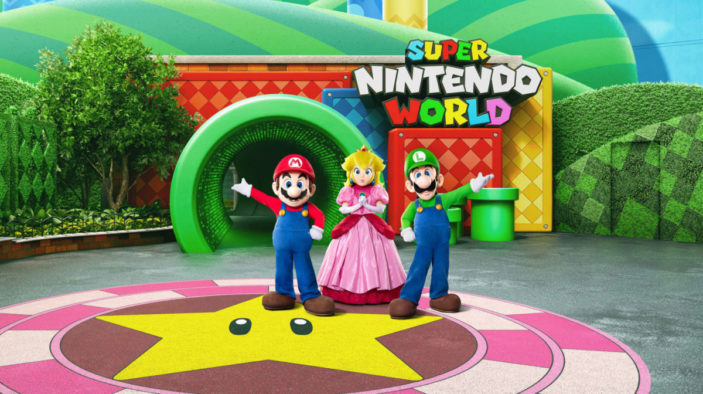 This week, Universal Studios Hollywood confirmed the opening date of their highly-anticipated new land, Super Nintendo World. It’s the second Nintendo themed land in the world, and the first in the US since the debut Osaka location opened as part of Universal Studios Japan in early 2021.

Entering in the lower section of the park through Peach’s Castle, this video gives you a taste of what you’re going to expect when the highly interactive land, a collaboration between Nintendo and Universal Creative, debuts on 17th February 2023.

You can see how vibrant it’s all going to look, with impressive animation surrounding the space, taken straight out of the Mushroom Kingdom world of the Mario gaming universe. Interactive activities are everywhere, and with purchase of a wearable wristband, the “Power-Up Band” (which will come in six design options with character themes), guests will enjoy enhanced interactions around the world.

Those who have visited the Wizarding World of Harry Potter will relate that experience to the interactive wands you can purchase in that part of Universal’s parks.

Guests will also be able to ride one of Universal’s most technically advanced experiences ever – Mario Kart: Bowser’s Challenge – which incorporates cutting-edge augmented reality (AR) with projection mapping technology and actual set pieces along a moving ride track.

The story behind the ride? Here’s what they say to expect: As part of Team Mario, guests will steer through underwater courses and courses in the clouds to compete for the Golden Cup while collecting coins to defeat Team Bowser and win. “Mario Kart: Bowser’s Challenge” raises the stakes for guests as an intriguing and repeatable ride with a variety of outcomes.

And the experience won’t be complete without a visit to the 1-UP Factory retail store, which will offer an extensive selection of merchandise from Mario and Luigi themed apparel to iconic character hats and an array of plush characters, including Mario, Luigi, Yoshi and Bowser.

Stay tuned to the AU for more on this exciting addition to the iconic park.

For more details about Super Nintendo World, and the park in general, visit UniversalStudiosHollywood.com.