Six places to walk in the footsteps of Elvis & Priscilla Presley in Memphis, Tennessee 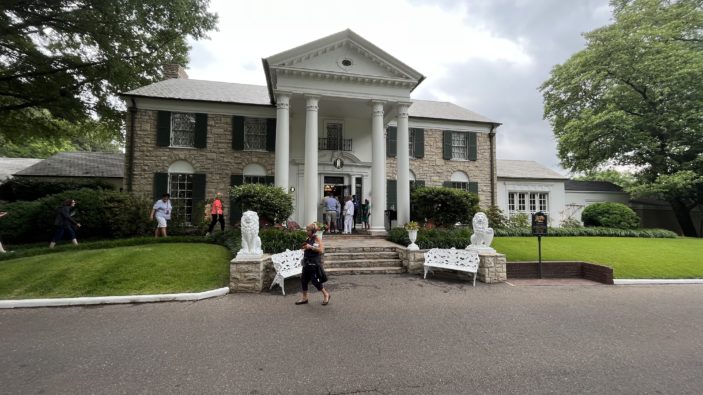 With Baz Luhrmann’s anticipated new film Elvis hitting cinemas in Australia and around the world, I flew out to The King’s home city of Memphis, Tennessee, to see the real life locations that Luhrmann and his team re-created when they filmed back in Australia. These are the six essential places to go and things to do in Memphis to walk in the footsteps of the King himself, and his wife Priscilla Presley.

1. Have a meal at Elvis’ favourite spot, Arcade Restaurant 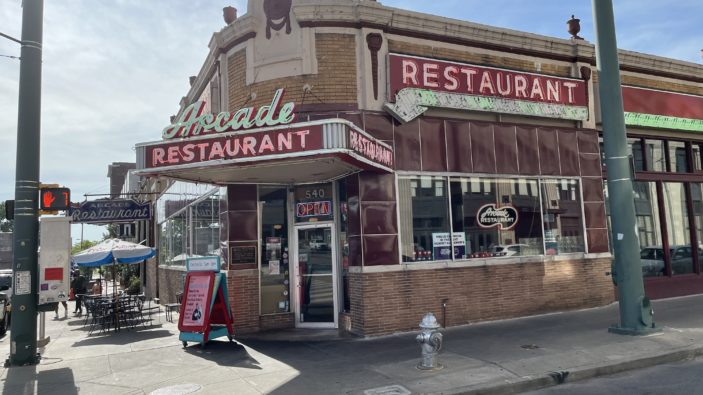 Start your time in Memphis right, with a meal at the city’s oldest dining establishment, Arcade Restaurant. Founded by Greek immigrant Speros Zepatos in 1919 on Main Street, the spot remains a favourite in the city, and remains owned and operated by Zepatos’ family – now in its 4th generation.

Arcade has a classic diner feel from the 1950s era – which is when most of what you see in the main restaurant area was built; after a fire in the 50s only the original floors and windows from the 20s still remain.

These design changes are from the era where Elvis made his mark on the city – and the world – making the place something of a time capsule. In fact, they still have Elvis’ favourite seat, untouched; his signature sitting on the wall. It’s the seat closest to the door, which would see Elvis facing a mirror with his back to the restaurant, so if hordes of fans spotted him, he would be able to make an easy exit. 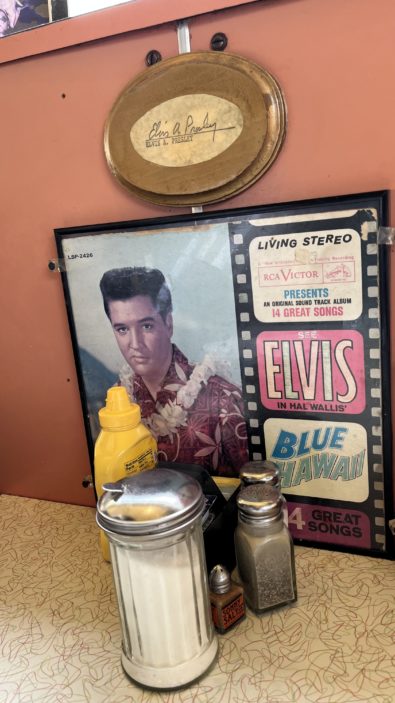 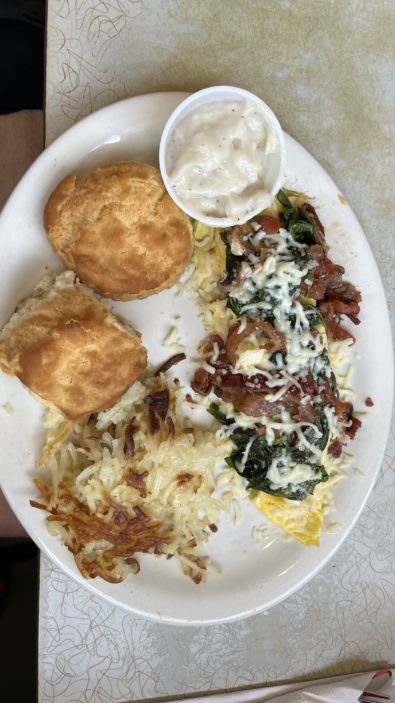 What makes the place even better? The food here is fantastic. I enjoyed an omelet with biscuits and hash browns, and left neither hungry nor disappointed. The restaurant is also connected to a newer bar. You can find out more about Arcade Restaurant HERE.

After you’ve loaded up on breakfast at one of Elvis’s favourite spots, you can head out to Elvis’s iconic residence, Graceland, where you can take a tour of the still in-use property (rumour has it, the family will sometimes be upstairs while hordes of tourists descend on the property).

Guests tour the property, which remains relatively untouched from the years Elvis lived on the property, accompanied by your interactive iPad tour guide John Stamos. Below, you’ll see the living room which you’ll first enter on arrival into the mansion. 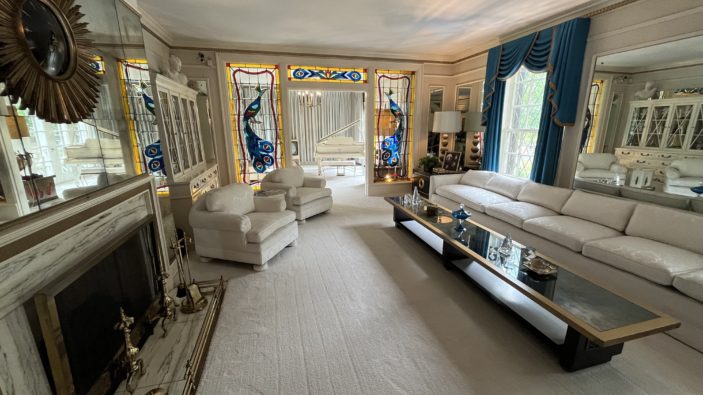 But the house isn’t the only place you visit while at Graceland. You’ll also see below, one of the many new exhibitions that are on display at Graceland – in this case, a beautifully displayed collection of Elvis’s jumpsuits. 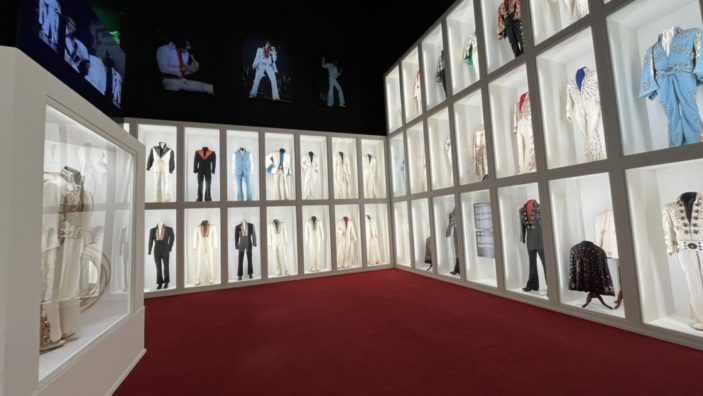 It’s all part of a 200k-square-foot entertainment complex called Elvis Presley’s Memphis, which opened in 2017.

Here, you’ll be able to see Elvis’ iconic pink Cadillac amongst an incredible collection of 20+ cars in the Elvis Presley Automobile Museum, which you’ll see below. There’s also lots of interactive displays, including the ability to add yourself to Elvis album covers, and take a virtual golf cart experience, driving around the grounds of Graceland. You can even be added to a movie scene and be serenaded by the King himself. 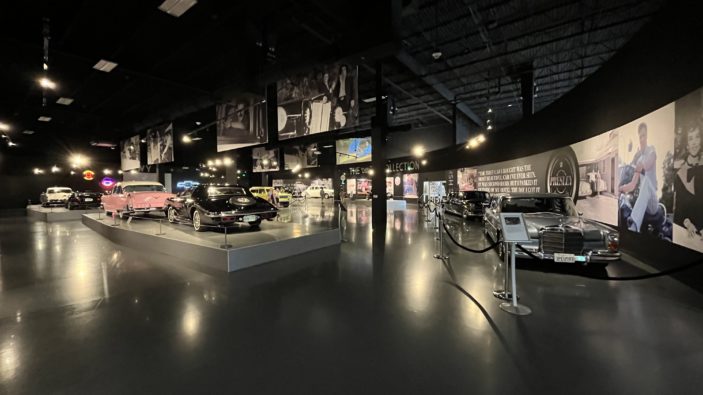 You’ll find other exhibitions like a private collection display and the “Private Presley” exhibit, and see the leather jacket of an icon like Springsteen, who alongside Australia’s own 5 Seconds of Summer, is quoted on Elvis’ influence on modern pop culture and music.

And if you really want to live like Elvis, you can now also stay next door at the 450-room, $92 million luxury accommodation The Guest House at Graceland, which opened in 2016 next door.

For more details about Graceland, head to the official website.

Well this isn’t something you see everyday; a restaurant that has been built into an 1940s beauty parlour, complete with the original Hooded Dryer Chairs used as seats. The Beauty Shop, located in the Cooper-Young entertainment district (around the corner from the iconic Goner Records), is such an establishment; and it’s made ever the more iconic because this was once the favourite spot of Elvis’s wife Priscilla Presley. 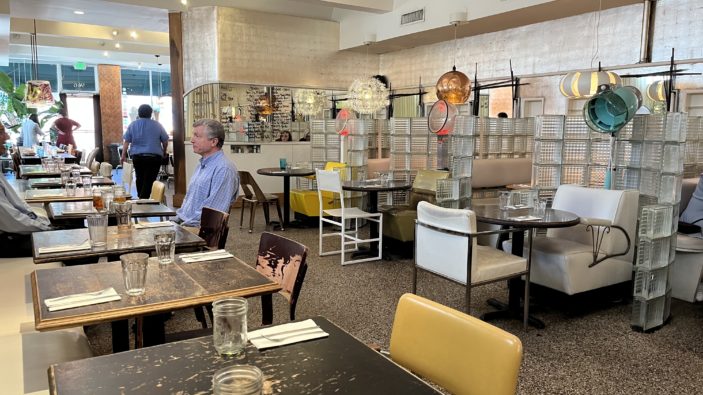 Now the restaurant offers up an eclectic American menu, with everything from watermelon & wings through to chicken & waffles, impressive salads, sandwiches and more – with menus for weekend brunch, lunch and dinner. There’s a great charm to the place – and the food is damn good too.

Head to their official website to learn more about The Beauty Shop, located at 866 South Cooper St.

Still one of the few active recording studios from the era – Sun Studios is home to where Elvis recorded his very first single “That’s All Right”, and they still have much of the equipment they used with him. They even let you pose with one of the microphones he used! You’ll see it in the centre of the room below. 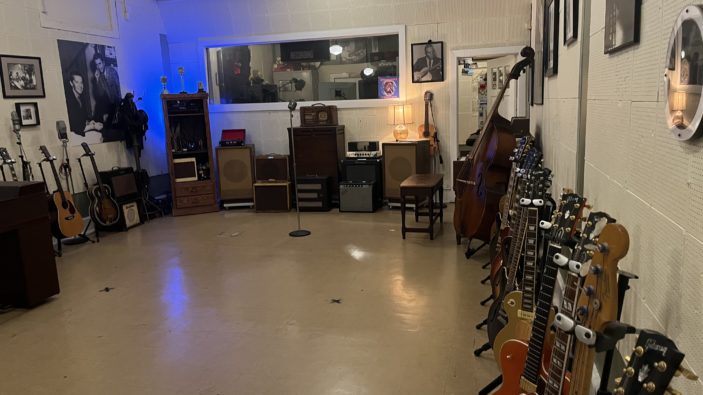 Located a mile from Beale Street, this is also the home where artists like Johnny Cash, Roy Orbison, Jerry Lee Lewis, Carl Perkins and B.B. King recorded early in their career. The Studios offer regular 40 minute tours of the facility, which includes a museum that includes one of Elvis’s earliest guitars, and photos of him in the space. 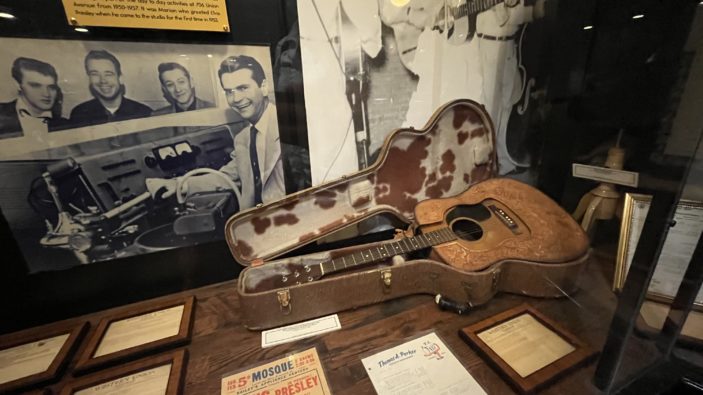 On the other side of town, can also visit Stax Records, where they have some additional stories of Elvis. Unlike Sun, this is a museum, rather than a working studio, but they’ve recreated it well – and even have Isaac Hayes’ Cadillac on display, which is worth the trip alone. Though he’s got nothing on Elvis’s car collection, which as you saw earlier, now has its own display room at Graceland.

Spend the afternoon with Tad of American Dream Safari, and you’ll be taken on a trip down Memphis memory lane – all inside a 1955 Cadillac covered in signatures from others who have sought out the same experience. You’ll be travelling in Elvis’s footsteps, just as Elvis Costello, Bobby Rush and many more iconic musicians have done before you. It’s safe to say you’re in some illustrious company. And what a car to do it in! 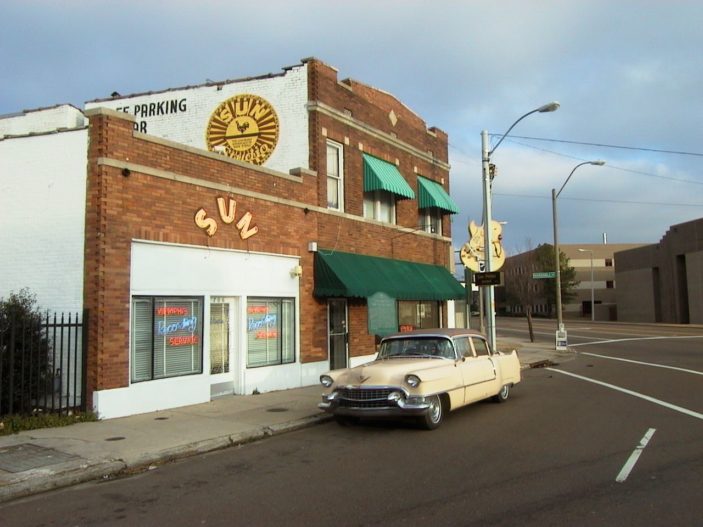 You meet out the front of Sun Studios, and from there you head towards the north side of town, where you’ll drive past Elvis’s Alma Mater, Humes High School, and Lauderdale Courts, the public housing apartment where he lived as a boy, among many other iconic spots in the city.

Tad is a phenomenal tour guide, and chances are you’ll also get to see the birthplace of Aretha Franklin, Willie Mitchell’s Royal Studios and much more.

And finally, we have one must-see feature of Memphis that you want to check out regardless if you’re on a journey to retrace Elvis’s footsteps or not: spend some time on the city’s iconic music strip, Beale Street. A lot of the music that inspired Elvis was performed here, in clubs up and down the strip. It’s also where he became friends with B.B. King, whose own original music club now sits at the top of the strip. 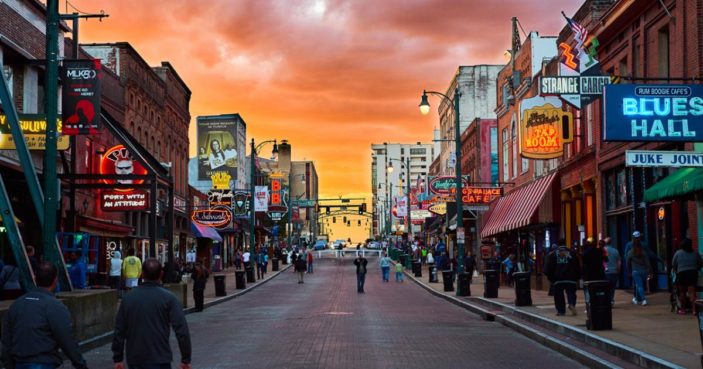 And right off Beale Street – on what is now called B.B. King Blvd no less – you’ll find the Memphis Rock & Soul Museum, which has a number of additional piece of Elvis – including a number of memorabilia collected by fans early in his career. 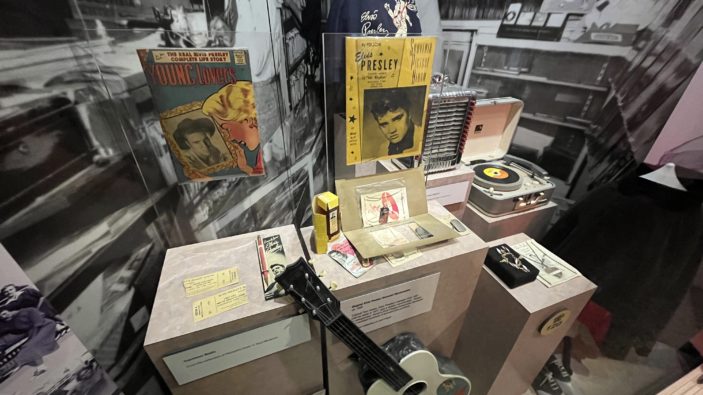 While on Beale Street, you can also pose for a photo with a massive statue of The King at the aptly named Elvis Plaza. To say Memphis has embraced the history of Elvis is an understatement; but the fact so much of this history has been preserved makes the city a treasure trove of experiences and memories of the Presley family – who still call Memphis home – that fans will be able to enjoy for generations to come.

Elvis is in cinemas now.

For more details about the Elvis experience in Memphis, head to https://memphistravel.com/ElvisMovie-aus

Flights to Memphis are available from any entry port in the USA. If you’re flying from Australia, Delta Air Lines flies to Memphis from Sydney for around $2800 return via LAX (based on fares in September 2022). For more details head to delta.com.

The author was in Memphis as a guest of Memphis Travel. While in Memphis, the author stayed at The Central Station Memphis, part of the Hilton Curio Collection – located directly across from the Arcade Restaurant, and a short walk from the Civil Rights Museum, The Blues Museum, Beale Street and many of Memphis’s most popular attractions. All photos by the author except the American Dream Safari, supplied by the company, and the shot of Beale Street, supplied by Memphis Travel.