Shadowplay by Peppers Review: a dark twist on luxury living 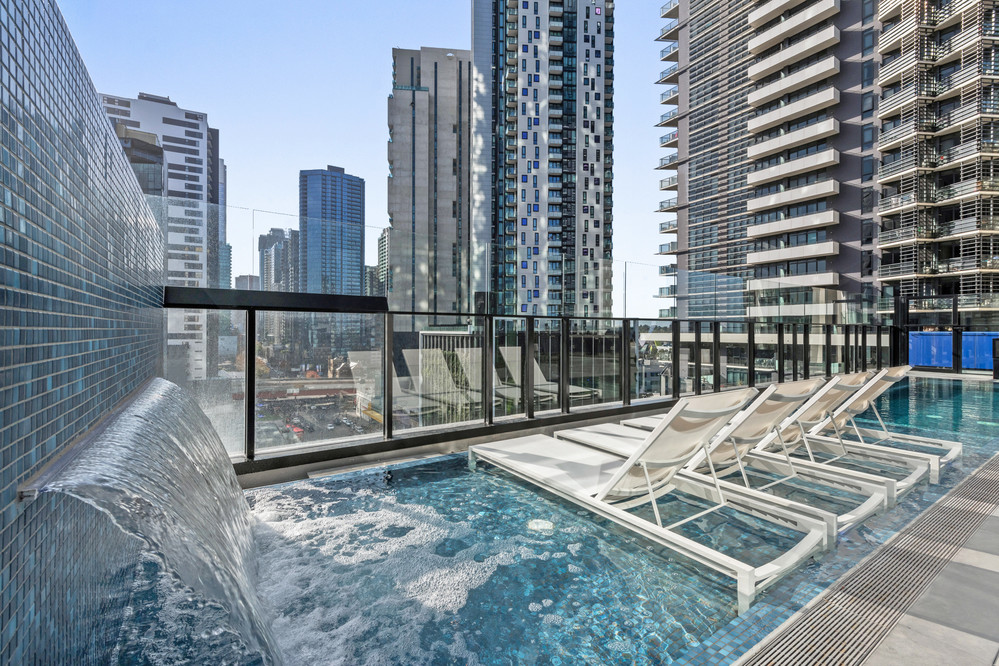 The shimmering silver, reflective ripple-like façade of Shadowplay by Peppers looks awkwardly out of place in overdeveloped Southbank. Melbourne’s major entertainment district is no stranger to impressive buildings, but this new apartment hotel really is something else. It’s as if the building has been ripped from the pages of a futuristic graphic novel, standing at 46 storeys with a mix of one and two bedroom apartments for both guests and residents. 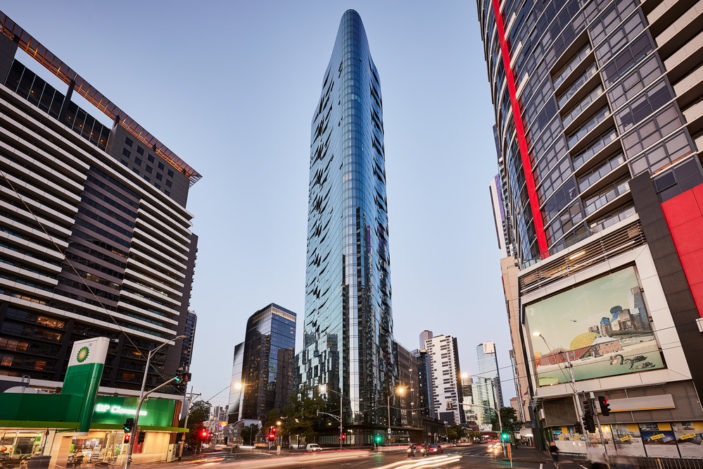 Come nightfall, the building is an angular silhouette looming over Melbourne cityscape. The exterior cleverly plays with light and dark to create a mesmerising effect, reflecting inside as corners bathe in shadows while others glow with yellow lighting. The reception area’s conceptual design is amongst the most interesting Melbourne has ever seen, juxtaposed against the bright and modern rooms to ensure this hotel’s name isn’t just some cool marketing label.

Being right next to the massive Crown Melbourne complex, it’s position just outside of the CBD is still close enough to all of the choice dining options any guest would need. There’s a 24-hour McDonalds right across the road for the less discerning, but it’s only a short walk to the free tram zone which will zip you to essentials like Flinders Lane, Spencer Street and Federation Square.

The building’s theatrical bent starts as soon as guests walk off the street and into the main entrance. Reception is accessible via a winding ramp that would be blanketed in pitch black if it wasn’t for one lowly light. It’s as if you’ve just stumbled upon the entrance to one of Melbourne’s many hidden bars, and while there is one of those immediately to the reception’s left, the ramp leads to the traditional check-in where smiling staff await to zip you up to your room.

So far, the restaurant itself has proved just as popular as the hotel, with both locals and visitors. Edwin claims the only wine bar and restaurant in the world that exclusively lists wines – 101 in total – from Victoria. Which is great, because – as every Australian knowns – wines from Victoria are some of the best in the world. Bottles are proudly displayed in glowing cases, snaking out to reception along those smouldering charcoal walls. Again, it all plays back into the hotel’s name, which is furthered in the unique dining area which makes clever use of only a few fixtures to create a beautiful, dimly lit space.

A similar commitment to provenance helps elevate simple sounding dishes like Slow Cooked Gippsland Lamb with smoked labne and saltbush, and a Burrata with dolce peppers and black olive. Both highlights on the dinner menu, while the a la carte breakfast is equally worthy, with options like the Wood Frog Bagel with a dance of smoked Tasmanian salmon artfully spread on top with crème fraiche, capers and dill.

These one and two bedrooms are obviously designed towards long-term residents. The living spaces are generous, while the modern amenities and luxury standard sense of comfort will certainly satisfy. Although the hotel’s theme is left far behind, replacing clever trick lighting with ultra bright and polished space. It’s a thematic break and takes you out of the hotel’s otherwise immersive element, which is slightly disappointing given the rest of the property gets by on its evocative design.

Most distinctive here is the mini bar, continuing the showcase of Victoria’s brightest producers. Four Seasons Gin and their recent collaboration with chocolate makers Hunted + Gathered, is featured here – a dark organic rare dry gin chocolate that’s suitably mind-blowing and completely faithful to the strong flavour profile of gin and tonic. They should just fill the mini-bar with these gorgeous blocks of chocolate alone and watch the incidental charges roll in.

Everything you’d expect from a modern apartment hotel is here. The high-end washer and dryer, a full kitchen with top quality products, and a (closed) balcony. There’s even proper black out curtains that completely block out incoming light.

A well-equipped hotel gym is located on the same floor as the pool, and though it looks rather small, the design maximises space to give ample room for multiple people. The door opposite the gym will bring you out to the small but beautiful pool area, reflecting off the building’s glass panels and overlooking the spread of Southbank and the Yarra. A BBQ, steam room and sauna are all found here, while further down is the elegant common lounge area, with big grey plush couches, tasteful avant garde artworks, and chunky design books.

Perhaps most surprising is the closed wintergarden located on the top floor, offering impeccable views of Melbourne CBD while offering ample, cosy seating around a central fireplace. It’s an interesting alternative to the typical open-air rooftop that tempt most luxury skyscrapers. On the same floor is the entrance to a mysterious cocktail bar – The Cloakroom – that was still in development during my stay.

I hardly noticed the staff as they buzzed around the hotel constantly checking on things. Service here is unobtrusive, fast and efficient, both throughout the hotel and down at Edwin where staff are more than happy to suggest a good wine pairing and actually deliver.

One Bedroom Apartments at Shadow Play start from an average nightly rate of $239, which is excellent value in Australia’s rather expensive luxury market. It’s also much less expensive than some of the more centrally located hotels, which is a negligible downside since Shadow Play is on the edge of Southbank, which means it’s a short walk from just about everything a visitor would need.