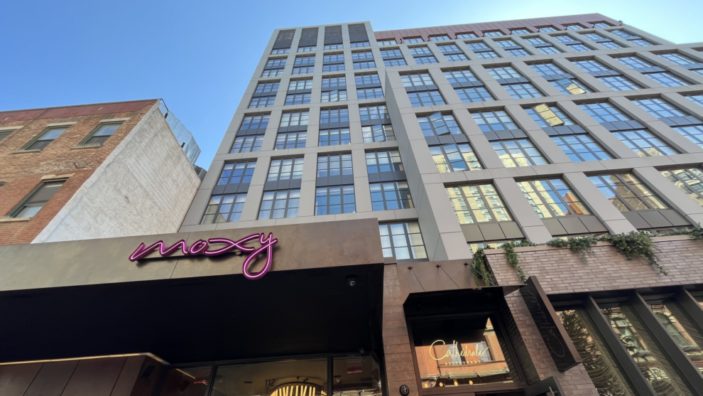 Having opened in September 2019, the Moxy East Village sits as one of the newer hotels in the ever-booming Manhattan – and the most recent of the four Moxy by Marriott hotels to open in the city.

For those unfamiliar with the Moxy Hotels brand, they are designed around being playful and affordable, with carefully, stylishly designed rooms that make use of the typical limited space that New York hotels are famous for, giving you everything you need, and nothing you don’t. This isn’t a no frills experience though – they just trim the fat you might find with other brands to keep the prices competitive.

This Moxy can be found in the East Village, on 11th, just off 4th Avenue, near Union Square, and opposite the iconic music venue Webster Hall. There’s so much to see and do in the area – I mean this is NEW YORK CITY after all. But it’s worth noting that there’s an AMC cinema right across the street, as well as a Tim Ho Wan around the corner – which is perfect for that afternoon craving for Dim Sum. They also have their own dining options, which we’ll get to a bit later.

The design of the building is said to reflect the “gritty architectural jumble of the East Village”, which you’ll see in everything from the check-in kiosks, designed by local artist Michael Sanzone, through to graffiti designs that cover the bathroom glass in your bedroom, and the carpets around the building. Look closely, and you’ll see “Fallout Shelter” appear amongst the design – a nod to the fact that there is in fact a fallout shelter from the 60s on the street, at the Cooper Station Post Office – the sign of which still sits outside the building (and its design is reflected on the carpets). Though these days, the actual shelter is a mail room! But I digress…

It’s a bit of a tight space in the lobby of the hotel, so you might find yourself waiting on the stairs if you’re checking in at a busy time. But they didn’t take long – quickly getting me my keys and giving me a lot of information about the amenities of the hotel. They were very friendly and set a playful tone for the accommodation. You’ll notice there are self-check in and check out machines, too, should you be in a rush – though I didn’t try them myself.

After checking in, you head to your room via one of two lifts, which feature funky lit up art on the mirror at the back, which includes a cluster of emojis poop and all. And the mirrors around it almost turn the space into an infinity room… 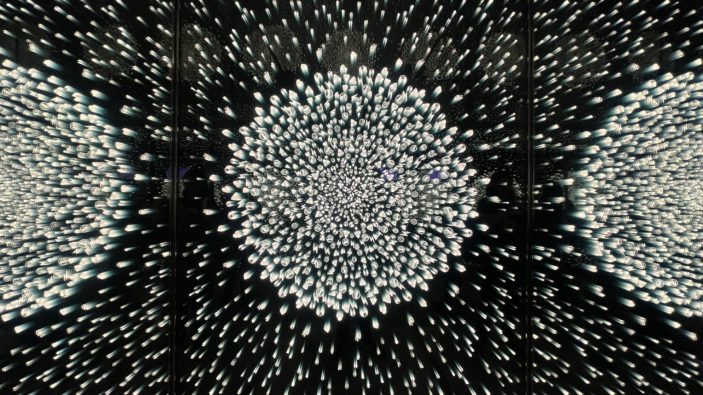 While not as large as the Times Square location’s 600+ rooms, the East Village location nonetheless sits across an impressive 286 rooms and 13 floors. Most of the rooms are small in size, but they fit a lot into the space, with Queen Rooms (some with an optional daybed), rooms with two doubles and even quad bunk rooms to suit a family. They also have “Suite Jane”, which is an entertainment suite with an adjoining Queen Room.

I stayed in a Queen Room on the 12th floor, which offered great views of the surrounding area (including the rooftop of the Webster Hall, which you’ll see in the photo below), and fits in everything you could need.

It’s an incredibly comfortable bed, with terrific pillows. And the blackout curtains, with solid protection from the sound of the city, ensure you’ll get a good night’s sleep.

A portable desk sits on the bed, for dining or work, and the remote for the Samsung LCD TV is on top of it. The TV has Netflix, Prime, YouTube, Showtime and more, that you can use your own logins for – the credentials are cleared on check out. There’s live TV too, of course, with tonnes of channels. The bed sits in a well designed unit at the end of the bed, that has some storage room above it, and also hangers for your jacket to the left. There’s a safe, drawers and more storage under the bed, too.

You’ll find AC & USB plugs sitting on either side; with the windowsill on one side, situated lower than the bed, proving a perfect spot to put anything you need. On the other is a side table attached to an Art Deco green chair, while an old style phone sits against the wall, that allows you to call the front desk or press a button for bedtime stories (which I understand is an enjoyable feature at all Moxy hotels). 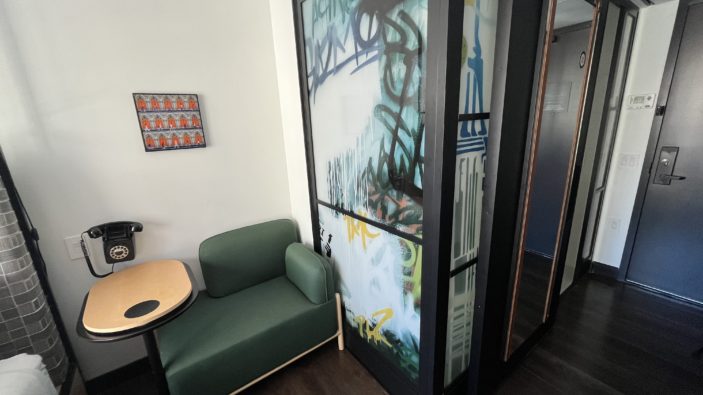 You’ll also find a commissioned piece by New York artist Xan Padrón, featuring time-lapse photographs of NYC dwellers walking past East Village locations. If you want to add some extra good vibes to the room, you can request a turntable and vinyl from the on site Alphabet Bar & Cafe, curated by Academy Records to reflect the sounds of the area.

The bathroom, which sits to the right of the chair, features a shower with terrific water pressure and Muk body wash and shampoos on the wall. It’s small, but gives you everything you need – and there’s privacy by the way of graffiti art. 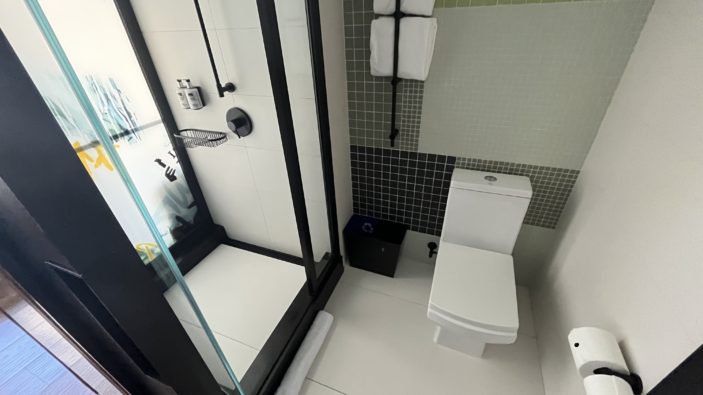 A juniper green sink and vanity sits outside the bathroom, made of glazed lava stone, looking very practical and industrial, with soap and plenty of towels. A hair dryer and handheld steamer sits in a basket on the shelving below it.

There’s no fridge in the room, but two bottles of Fiji water are sitting there and available for purchase, at $5 each. There’s also lots of pegs built into the wall to hang more things – and they even hang a clipboard, showcasing all the upcoming events at the hotel. Which may also serve to inspire you to explore the hotel – and explore it you should…

Outside your room, you’ll find a fitness centre and a business centre, plus meeting studios. They do welcome dogs in rooms for a fee, and housekeeping services are on request for short stays. The wi-fi is fast, and no password is needed.

Tao Group Hospitality oversee four dining options in the building: Cathédrale, a French-Mediterranean restaurant from Chef Jason Hall; Little Sister, an underground lounge; Alphabet Bar in the lobby; Café d’Avignon Popup at Alphabet Café; and The Ready, an all-season rooftop bar which opened in 2021 after being delayed due to the pandemic. They are generally open to 10pm, with happy hours on weekdays 4-6pm and 12-3pm on weekends. Given its popularity, they recommend making a reservation. Indeed, when I went up there, it was pumpin’! 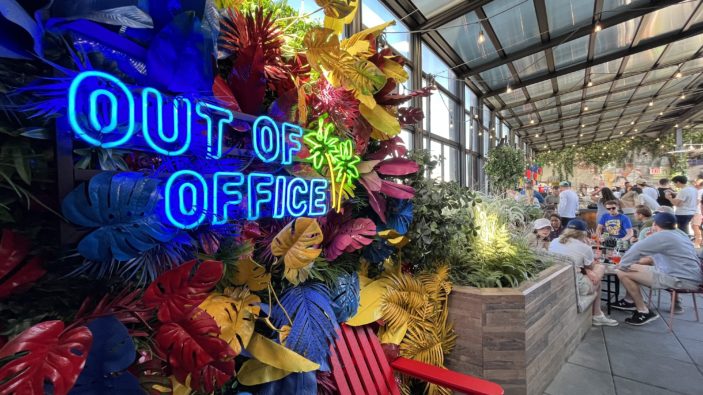 A retractable roof sits over the space, so it’s ready for any time of the year, and there’s a great view of the south of Manhattan, with the Freedom Tower in the distance. You’ll be able to enjoy lots of tacos and cocktails while you’re up there – and they all looked very, very good. And both are on special during happy hour! 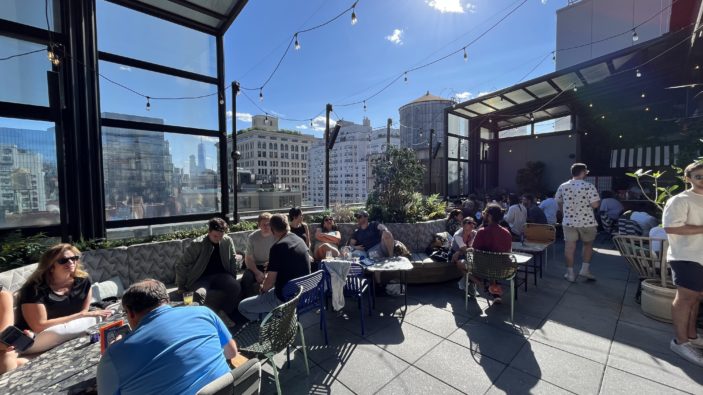 The rooftop bar isn’t accessible from the main lifts, however; you have to go back to the ground floor and then use a separate entrance on 11th, two doors down. I learned this the hard way. The restaurant, Cathédrale, is accessible via the lifts, however. It’s the only complaint I would have about the layout of the building, as it seems like a missed opportunity for guests; though I understand they want to keep the guests separated and not clog up the popular spot.

I really love the Moxy hotels; they’ve started to become a reliable source for my stays whenever I’m in New York. this was my first time I’d stayed in the East Village location, and being so close to Union Square makes it another terrific location to enjoy a very comfortable stay indeed. And if I never had to leave that bed, I wouldn’t have. But definitely make a reservation to check out the rooftop bar while you’re here – because it’s New York, and you will need to get out of bed at some point.

The Moxy brand will continue to grow in New York in the coming year, with two new locations – one on the Lower East Side and the other in Williamsburg. And after being delayed due to the pandemic, you’ll soon see Moxy debut in Australia, with their South Yarra location set to open in Melbourne later this year, and another location at Sydney Airport in 2023.

Stay at Moxy East Village from $179 per night. Book at moxyeastvillage.com.

The author stayed as a guest of the hotel for two nights in June 2022. All photos by the author.