Situated a five minute walk from 42nd Street in Times Square, on the corner of 36th Street and 7th Avenue, is the world’s largest hotel in Marriott’s boutique chain, Moxy Hotel.

Moxy Times Square is one of three of the brand in New York City (also in Chelsea and the East Village), and opened in September 2017, and it’s truly a hotel like no other. Their own branding describes it as a “spirited alternative to the typical hotel experience” and they’re not wrong – though you’ll still get everything you would expect from any major brand hotel, among its 612 rooms.

If you haven’t heard of the Moxy brand to now, don’t feel like you’ve been out of the loop. Though they’ve been quickly expanding around the world, there aren’t any (yet) in Australia, and the first only opened in September 2014 in Milan. But don’t worry, you have two locations to look forward to: one in South Yarra, Melbourne, and one in Perth – both due to open in the second half of 2021.

With 180 and 150 rooms respectively, the Australian locations won’t match the size of their Times Square counterpart, and they’re entirely new builds. In the case of this location, the owners took over a space that sat as a hotel for almost fifty years, opening as the New Mills Hotel in October 2017. Back then it held 1,875 rooms and was an affordable mens only hotel (you can read more about its history in this great New York Times article). But nonetheless, the Times Square location will give you some idea of what to expect when Moxy does arrive in Australia in a year and a half.

So much thought has been put into the layout of the sprawling hotel, with a spirited design running throughout the whole hotel. A newly engineered atrium sits as the building’s lobby, with an artwork hanging above made of glass shrapnel that’s designed to feel like it’s giving you a “hug”.

The hotel is also trialing new methods of customer engagement that you may one day see at other Marriott brand hotels. The first is a self check in option, which is situated at kiosks in the cozy lobby. Elsewhere, your floor has self-service housekeeping options, which we’ll get to later. The design of the lobby also features large screens that are populated by popular quotes from songs that also end as a question (see “Can You Feel The Love Tonight?” on the provided image above), which flicker on like the old boards at train stations and airports.

There’s a Blind Barber in the lobby too, and a large screen next to the elevators that list events in the hotel – look out for regular events like game nights on Mondays in Bar Moxy, and regular live music. On the second level of the atrium, you’ll find a comfortable plug and play area where you’ll find some hotel guests and likely some locals as well getting some work done.

Like IHG’s Hotel Indigo brand, Marriott’s Moxy hotels are each of unique design, bringing inspiration from different aspects of the building and its surroundings. Though with Millennial and Generation Z travellers as the target market for the hotel, it sits closer to the Ace or Dream Hotels in its agenda. And from the half naked man on your “Do Not Disturb” door knob hanger, to the playful artwork and amusement park themed rooftop bar that has become a celebrity hot spot, with picturesque views of the Empire State Building, its intent feels clear throughout. 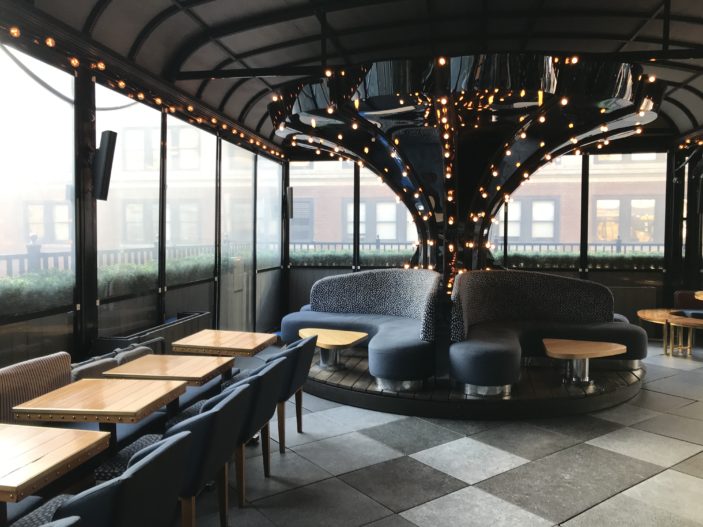 Magic Hour is the said “urban amusement park” concept that sit on the rooftop, operating all year round, making it New York’s largest all-season hotel rooftop bar and lounge. It has a separate entrance to the rest of the hotel, and entices locals, hotel guests and instagram celebrities alike. With funhouse mirrors, elephant lights, naughty bears and a variety of designs throughout the establishment (a beer garden on one side, a lounge bar on the other), plus a retractable roof, there is truly something for any nightlife seeker. You’ll even find a three hole putt putt golf course called Fourplay, which they say is “Where the Magic Happens”. . 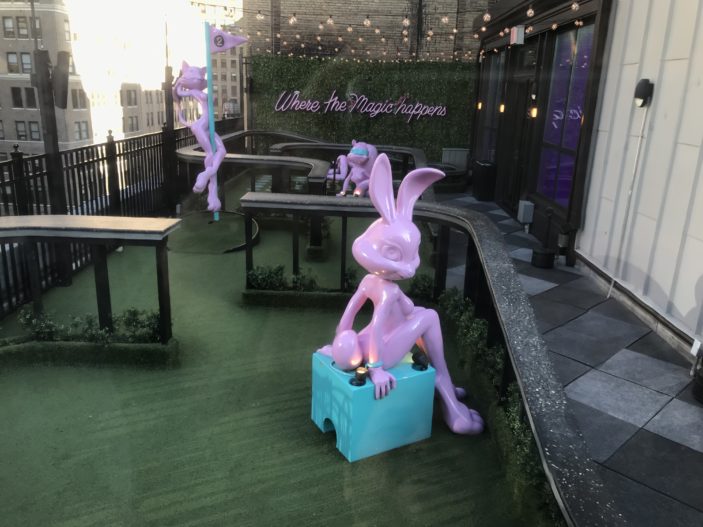 It’s not all about traditional nightlife at Magic Hour – they do a brunch up there on weekends and bands regularly play up there too. It all fits in with the M.O. of the brand:  “Moxy Hotels serves as a playground that attracts Fun Hunter travelers and is designed to give guests everything they want and nothing they don’t at an affordable price. Lively public spaces, minimalist style and cozy guest rooms offer up a new way of traveling.”

This particularly makes sense in the city that never sleeps, because they understand that you’re not going to be spending much time in the room. Some rooms, like the “Crash Pad” are specifically designed with a single traveller in mind, offering a twin bed and a cozy space across 150 square feet, that no doubt reflects the spirit of the original building’s purpose.

Meanwhile, the Yabu Pushelberg-designed rooms are described as fitting an “Urban Camping” theme, with open planned sinks, beds with wooden frames, open pegboard closets and furniture that folds away and hangs on said pegs. It’s all about providing you with everything you need, and nothing you don’t. You’ll find bunk bed rooms in the hotel too, and loft rooms, though some 50% of the rooms are equivalent to the one I stayed in – a 200 square foot Queen Bed room. 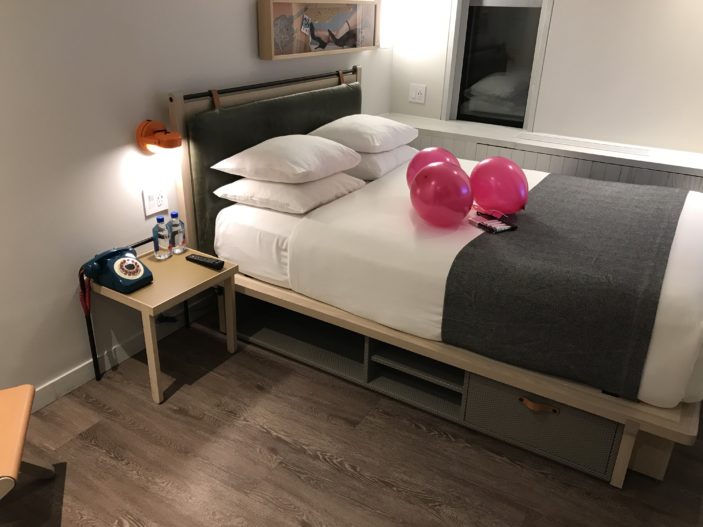 The bed was on firm and comfortable, with smaller pillows than I generally dislike, but wonderfully comforting all the same. Curtains were virtually black out the space, though the sound wasn’t totally cut out; a mild hum of New York could be heard, which isn’t surprising given the age of the building, but it was never a distraction. True to the nature of having everything that the modern traveller could need, you’ll find plugs on either side of the bed with AC and USB sockets, as well as light switches.

A massive Samsung TV sat at the end of the bed, making for some truly comfortable late night viewing. It’s a smart TV too with free Showtime on demand and apps like Netflix, HBO GO and Pandora available with your own login. 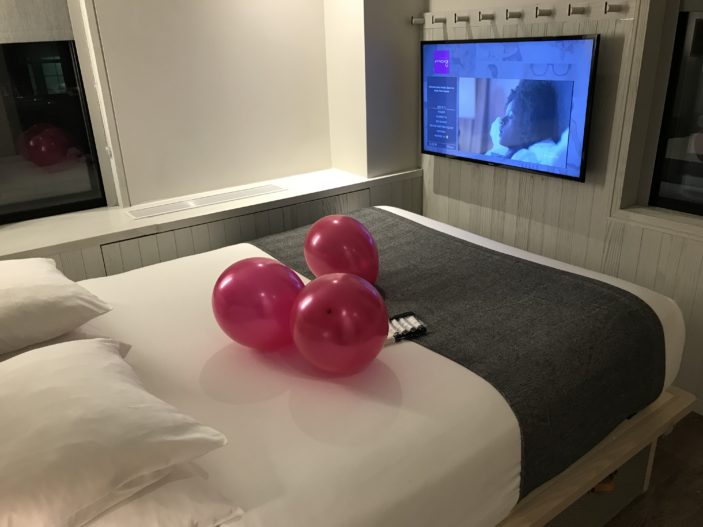 A small table and chair were folded up and hanging on the wall next to the windows. There’s a hair dryer and a mini clothes steamer next to the sink, which is industrial in its design – in keeping with the “urban camping” theme of the hotel. A modern artwork also sits behind the bed with a pop art design and a Teenage Mutant Ninja Turtle action figure on display within. It reminded me a bit of what I found at the Farmer’s Daughter Hotel in Los Angeles.

There doesn’t appear to be much storage at first glance – just some hooks on the wall with a few clothes hangers. But there’s tonnes of room under the sink and next to it for your toiletries and under the bed is storage that would fit many bags, and most of your personal effects. There’s also a safe in a drawer for your most prized possessions. Two bottles of complimentary Fiji water sit next to the bed, as does an old style telephone with a button for bedtime stories (a seriously cool idea). 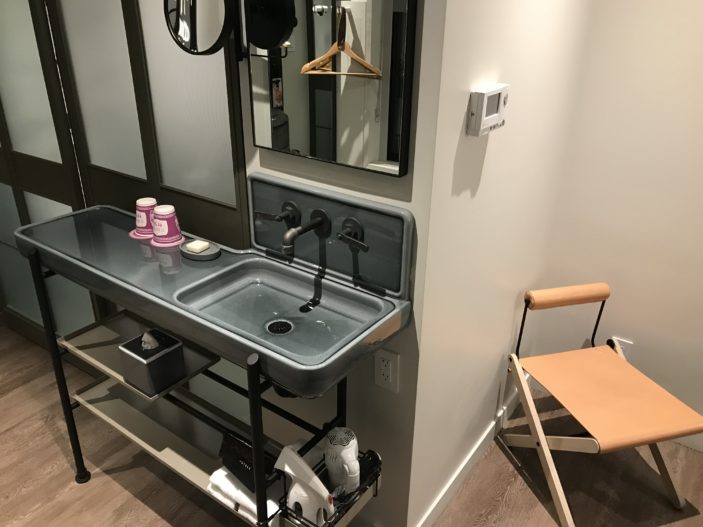 Though there’s no pool in the hotel, the bathroom is playfully designed like one – with “No Diving” designed into the green floor mosaic, and “2.5 ft deep” against the wall. Muk provide the shampoo and body wash that sits against the wall, with a powerful rain shower overhead. And I don’t know how they achieved this, but a point worth mentioning too was that the room always smelt really good. 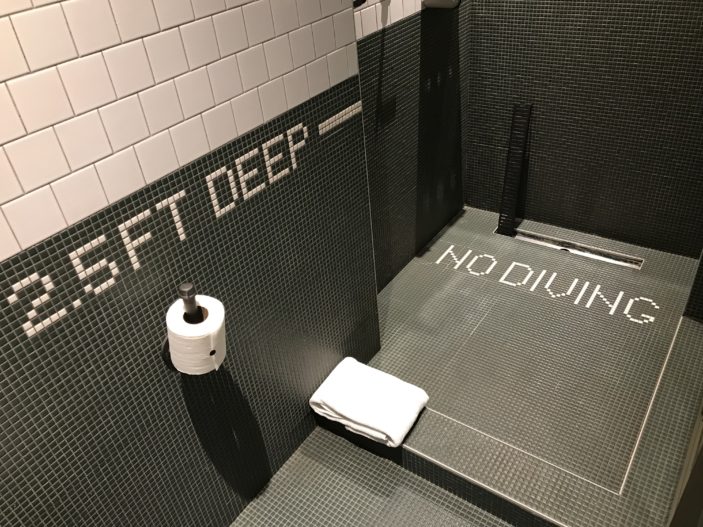 Internet was super fast and reliable, accessible by a quick click, with no login required (even though it said it was). Earlier in the article I also mentioned a new approach to housekeeping, with a “Stash” on each floor that has extra amenities you might need so you don’t have to bother housekeeping, while you also don’t have to go without the things you need – like toiletries and towels. A really smart way to manage 600+ rooms, while not wasting anything.

Look out for themes throughout the hotel at different times of the year too – while I was there earlier this month, they had a “Pink Holiday” theme going on throughout the building. Right next to Bar Moxy you can also find a space to get tattoos, by celebrity artist JonBoy, who offers appointments five days a week. And you’ll know when he’s in thanks to the clever sign lighting up as “No Tattoo” when he’s not in. No doubt plenty of Instagrams are taken there, and I’m sure many will want a glimpse at his Gucci tattoo table too. 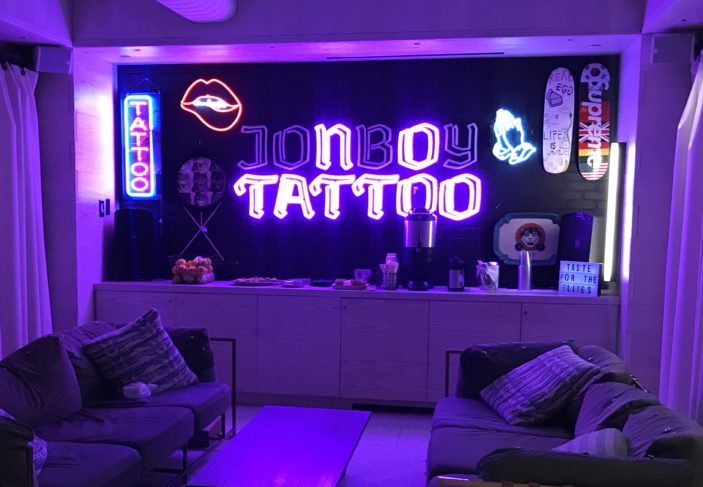 There are five dining options on site from the TAO Group, including the seafood brasserie Legasea, pictured below, The Pickup, a twist on the “grab-and-go” concept you’ll find at many hotels these days (basically a store where you can grab snacks and other items as you need them, in lieu of a mini-bar in your room), the mentioned rooftop bar and lounge, and Egghead, which serves breakfast until 2pm. 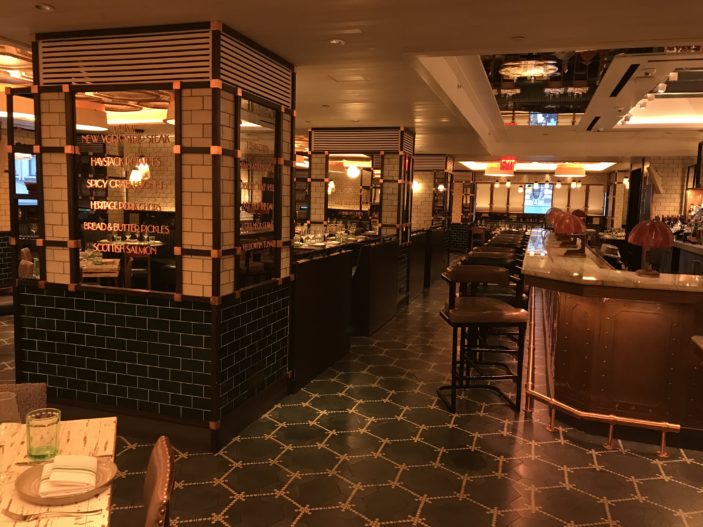 If you want to have a cozy sit down breakfast though, look no further than Bar Moxy, located just off on from the Atrium on the second floor. It’s a communal lobby bar that sits alongside The Pickup, and offers tasty breakfast options like eggs with toast (as below), omelets, oatmeal and a breakfast sandwich. They also have some grab-and-go options of their own. 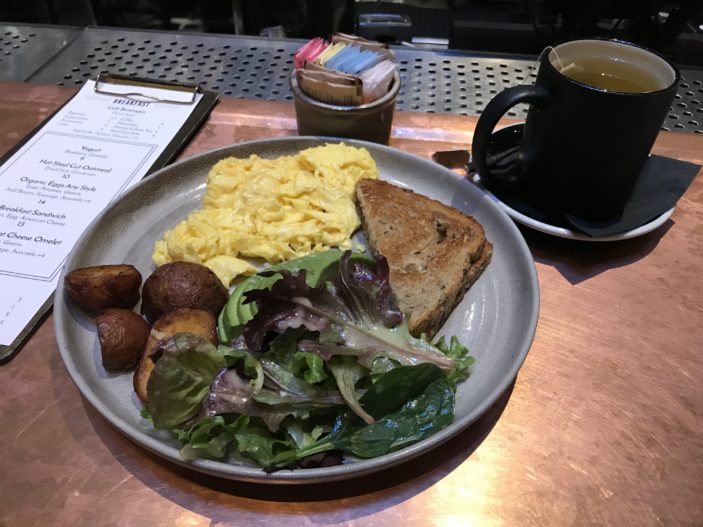 Breakfast is served here until 11am, and you’ll also find free coffee and hot chocolate until 10am. There’s a Foosball table up here, and board games, with tables that double as stools – keeping with the Urban Camping theme that runs throughout. Oh and there’s also 24 hour Ice Cream Vending Machine. I have a feeling that spot comes to life late at night.

There’s so many other options within a short walk, from the Shake Shack at 36th and Broadway, to the legendary Joe’s Pizza – which will give you one of New York’s best slices of pizza until 4am. And that’s just the tip of the fast food iceberg in Times Square. There are great restaurants throughout – and of course, all the theatres are around here as well. I caught both David Byrne’s American Utopia and Beetlejuice while I stayed here; both sitting within a short walk of the hotel.

Sitting at the heart of, with affordable prices (by any standards, let alone by Manhattan’s) and uniquely fun attitude, the Moxy is unbeatable in more ways than one. I love how they’re re-thinking the way a hotel can function – the self service kiosks at entry and “The Stash” on each level might prove confusing to older travellers used to a certain way of hotel living.

But this approach isn’t for them – it’s for the new generations of travellers who have grown up travelling through hostels, and are happy with the ease of being able to handle things yourself. And did I mention the 24 hour, self service ice cream vending machine, free hot chocolate and the mini-golf course on the roof? This is truly a hotel unlike any other.

Moxy Times Square is located at 485 7th Ave, New York, NY. To book your next stay at the hotel, head HERE.

The writer stayed as a guest of the hotel for two nights. Photos by author unless otherwise listed.