The gentle tune of minimalism sweeps through Sydney’s Little National Hotel. Opened in September of last year, the latest from Canberra-dominating Doma Group is a conscious push against the often irresistible excesses of big-city hospitality. Not just that, the hotel’s soft, soulful accommodation is an obvious embrace of Japanese-influenced, less-is-more philosophy, gently sketched onto Sydney’s typically urbane tastes.

That’s Little National Hotel in a nutshell, still fresh-faced and occupying a prime location – so close to Wynyard Station that you might as well considered it part of the central transport hub.

Complemented by a sizable modern gym (just behind reception), and some genuinely relaxing rooms, it seems the hotel has been hinged as much on the idea of a Sydneysider staycation as it has been prepped ideally for visitors once international borders open.

Those familiar with Little National Hotel in Canberra know the modest brand’s tent poles: a prime urban location, a zen-inspired fitout, and a swift push through to the “affordable luxury” market.

It’s that kind of in-between hotel that modern trends are made of, and though travellers who pick Little National Hotel may be sacrificing on the narrative design of QT Sydney, or the classic luxury of InterContinental Sydney, there’s something undeniably charming about pared back accommodation that doesn’t compromise when it comes to comfort.

With 230 guestrooms, you wouldn’t exactly call this a boutique. But it has the same idea. Little National Hotel, and Australian architectural firm Bates Smart, consider both what guests do need, and what they don’t; it’s trimming the fat, without cutting the taste. 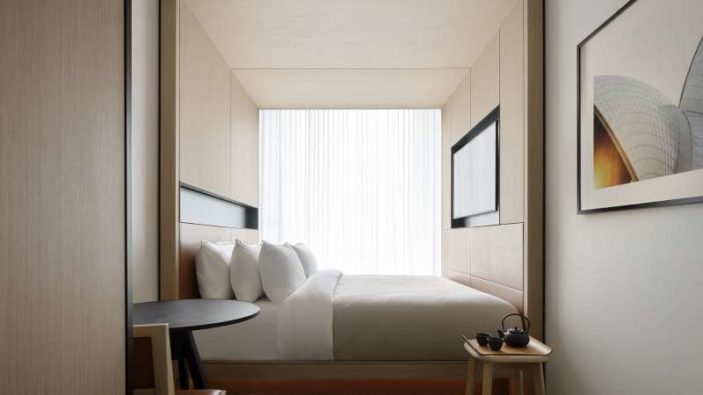 The result is a Marie Kondo level of efficiency, with rooms compact enough to make you feel like you’ve just zipped to Tokyo, but packed enough with high-end essentials like Appelles toiletries, expensive linens, and hotel robes so beautifully textured and fluffy that I’m confident they are currently the best in a Sydney hotel.

How good are those robes? Well I stayed at the Park Hyatt Sydney recently (this is for context, I’m not gloating – promise) and putting on the robe there, at what is one of the city’s best known five-star hotels, was akin to flying economy (Park Hyatt’s robe) after jet-setting in business (LNH’s robe) for so long.

The inspiration is clear. Create small, functional and visually appealing rooms that use modern technologies and creature comforts to make up for the lack of space. It works. It works quite well actually, positioning Little National Hotel as the Australian answer to Marriott’s Moxy, or the Tommie and Yotel brands that are popular in the US – all expressions of lifestyle hotels which have been clearly influenced by the rise of modern capsule properties throughout Asia (particularly Japan).

Despite the small size, Bates Smart have made some clever choices. Pristine wall-to-wall king cradled into the far end of the room; silky lily-white linens; a well-sized smart TV mounted at the foot of the bed, hinting at the desire to laze around and watch Netflix all day.

At the head of the bed is a small ledge that’s been built into the wall. Lining it, a tablet that features information about the few hotel amenities, a guide to nearby restaurants, and lighting control. This is the same spot for various charging ports.

The downside is that the room’s slim profile means a distinct lack of furniture. There’s a chair oddly places against the wall, and a laughably small dining table. You’re either eating your dinner in bed and avoid any drip-drops from disrupting the silky linens, or you’re crouched over the diminutive circular table like a children’s story book villain who isn’t considering the years of back pain ahead.

Of course that’s expected. And Little National Hotel’s strength – at least when it comes to guest rooms – is also its weakness. The bathroom is similarly cramped, but at least it’s big enough to maintain a sense of comfort. I’ve squeezed into smaller bathrooms in more expensive hotels, but you’re still compromising here. A small bathroom is always a bad idea. Although to the hotel’s credit, the designers haven’t insulted any tastes by including the vastly outdoor shower-tub combo so many modern hotels still persist with. 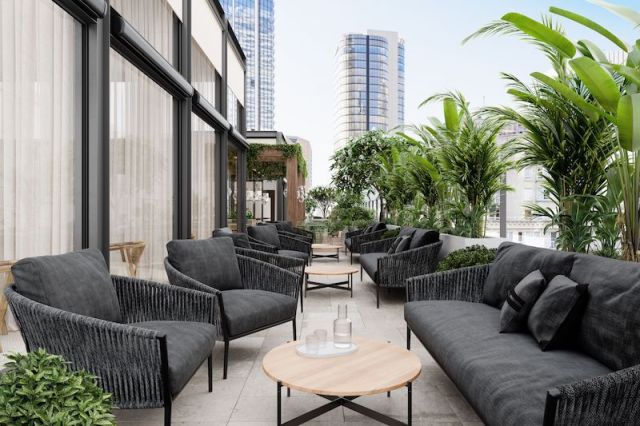 Outside of the room, the hotel has very few common areas. A reception with fast check-in tablets is largely empty save for some forgettable artwork and some lounge seating. Behind that is the aforementioned fitness centre and it’s quite generous with the equipment – you won’t need to wait for any treadmills during your stay.

The real show-stopper is a top-level communal area which packs distinct study zones, a lounge room, a rooftop bar, and outdoor seating. Aligned with other youthful hotel brands, it’s a swift encouragement to get out of your room and work/play in an area in which you aren’t planning to rest your head.

The well-lit, green spaces of the rooftop bar is almost an equal split between plush indoor furniture and timber-splashed outdoor seating. It looks like somewhere you’d want to drink even if you weren’t a hotel guest, although on my visit the staff were more suited to grabbing beers from the fridge than they were building classic cocktails. Whether they’ve gotten better at mixing up a negroni or old fashioned, I wouldn’t know, but as long as you aren’t expecting anything more than some casual drinks and a great spot to chill, you’ll be very satisfied.

Little National Hotel is beautifully considered and ideal for leisure travellers who want something comfortably sitting in between cheap-and-cheerful, and luxury. There aren’t any views to speak of, the space – as well-used as it is – isn’t perfect, despite the obvious love behind the design; and the hotel could use some better in-house food and drink. Despite that, the staycation appeal is undeniable, and the hotel manages to slim down without sacrificing some of the more comforting features of a hotel. The balance is admirable. 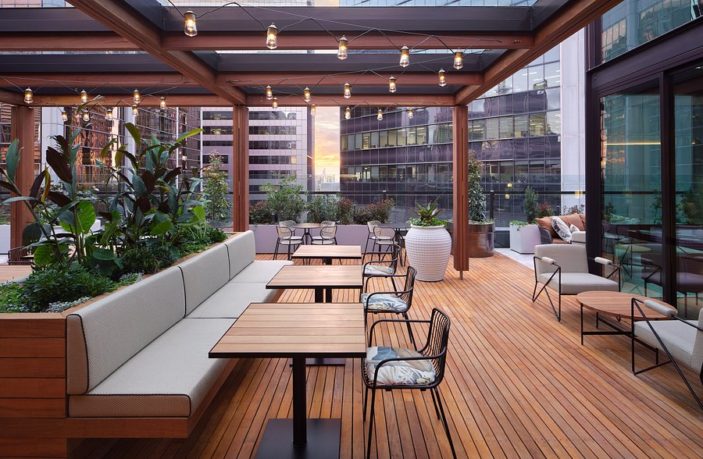 You’re looking at around $229 per night for a room at Little National Hotel on average. While modern hotels are rethinking their approach to luxury and offering smaller format, more efficient stays that avoid minimalism, the prices don’t seem to seeing a similar cut. Little National Hotel is an exception, and even though you’re still forking out over $200 a night (on average), at least you’re getting some better quality amenities than similarly priced hotels.

For $50 less I could get a room (same date) at the Park Regis City Centre – which is just as well-located but is not as comfortable; certainly not as modern. Compare that with Little National Hotel which has an infinitely better bed, Appelles amenities, a comfortable rain shower, and plush robes. I’d say the $50 difference is justified.

The writer stayed as a guest of Little National Hotel.