Life on the Border: El Paso, Texas – Where to stay, what to eat & how to get to Mexico (and back again)

Way back in 2011, when I was flying home from my second SXSW, I jumped on a Southwest flight flying from Austin, Texas to Los Angeles. En route, I enjoyed a brief stop over in El Paso – a common stop with this airline (for whom El Paso is a hub) – an airport which still sticks out to me as having some of the fastest internet I’ve ever experienced. File this one under “useless piece of information unless you’re covering a festival at SXSW and need to upload a GB of videos to YouTube in an instant.”

Excellent first impressions from the airport aside, the city is almost halfway between Los Angeles and Austin, which is pretty crazy when you think about it; El Paso is still in the same state as Austin – Texas. But sitting on the border of New Mexico, USA and Juarez, Mexico, it’s like being in another world than my origin Texas city. Suffice it to say, this city is worth the stopover; and last year I finally got to have a proper one. So what do you do while you’re there? Here’s a look at some of the best places to eat, drink and stay – and we provide you with a dose of information about how you can waltz in and out of Mexico in an afternoon.

For Accomodation and a Meal: Hotel Indigo El Paso & “The Downtowner”

Not long after touching down in El Paso, I headed to the Hotel Indigo – which requires you to venture up to level 5 to check in, where you’ll also find a pool and a bar with its own dining menus. They’ll valet your car for $12 a day, and you might just need to as well. We weren’t able to check in immediately (they were pretty strict on the 3pm check in time), so we headed to the bar to enjoy a beer or two. Needless to say, driving the car suddenly seemed out of the question. But with a view that good, we weren’t complaining.

The room was compact, with a comfortable King Bed taking up a lot of the space; but there was clever use of the remaining area. I loved the design of the room, with its focus on white walls and exposed wood running throughout the building. As with any Hotel Indigo hotel, there are plenty of design elements inspired by the local area; the faux succulents that line the doors were a nice touch, embracing the Texas desert. A quote from Cormac Macarthy was on the wall, too – his book No Country for Old Men was set not far from this location. And you’ll enjoy plenty of attention to detail like this around the whole hotel, as well as all the comforts you’d expect from any four star hotel, including a sizable and well stocked bathroom (with Aveda Toiletries at your disposal).

There’s also great food at the hotel; The Downtowner is the restaurant on the ground level, with a mix of affordable and more expensive options. The Mac and Cheese side is a must; Gouda cheese adding a full flavour with a serving as large as the burger or sandwich itself. And at $14 it’s a bargain. Definitely sink your teeth into the whole menu here, it’s diverse and the quality is excellent across the board. 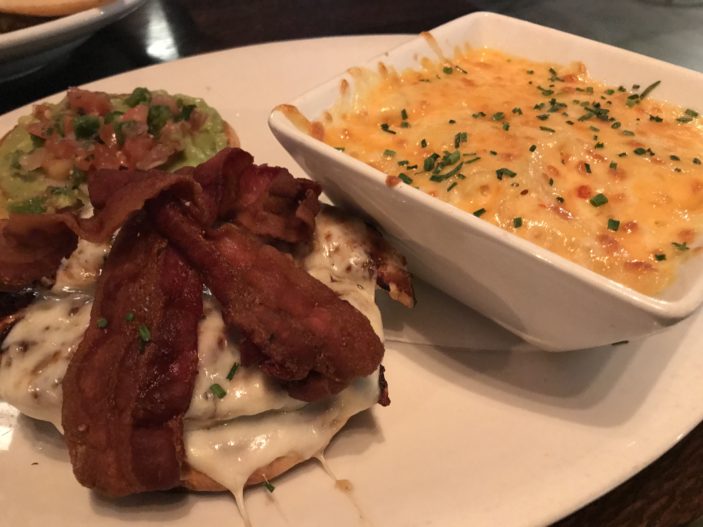 The hotel is in a great location, too, in the heart of downtown – within walking distance of the El Paso Museum of Art, the Museum of History and the El Paso Mission Trail. But to fully experience life in his border town, you may want to head out a little bit further than that…

For a Day Trip (and a World Famous Margarita): Juarez, Mexico

Years ago, no one in their right mind would have walked over the border bridge between the two cities – the place was the murder capital of the world thanks to some pretty insane drug cartel violence. Thankfully, those days now seem behind them, and it’s a safe spot that provides the perfect day trip for anyone visiting El Paso. Like a lot of places in Mexico though, you’d still be advised to go in a group and stick to the daylight hours.

I went for the afternoon with some friends and had an amazing afternoon drinking tequila, eating tacos and poking my head into some of the markets around the area. The architecture is pretty fantastic, too. 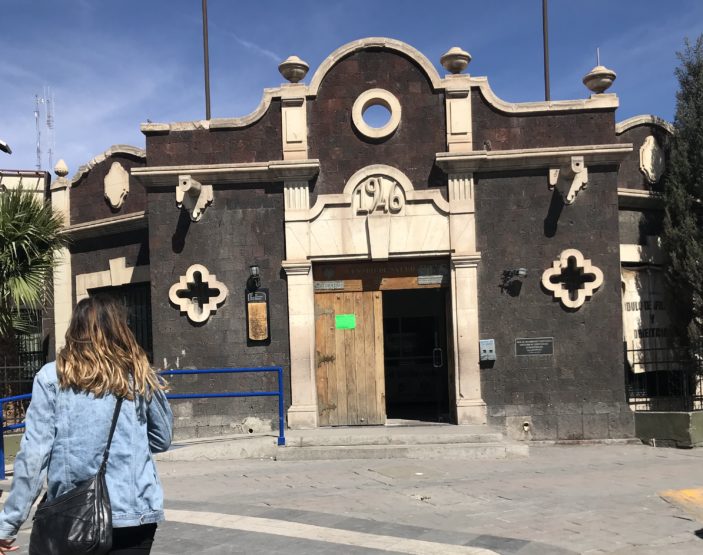 To get there, we jumped in an Uber to the Santa Fe Bridge, from where we crossed the border on foot. It costs 50 US cents to walk the bridge to Juarez, Mexico – and interestingly, there’s no border security getting into Mexico. Of course it’s a different story coming the other way, which you can see as you walk in to the city, eyeing the massive traffic jam coming back into El Paso and America. Indeed, your return journey requires a longer wait as you go back through border control, but it’s pretty straightforward. Naturally, as an Australian passport holder you’re going to be looped in a longer queue than US residents. But the buzz from the tequila helped pass the time nicely.

While there, make sure you get yourself a margarita at the World Famous Kentucky Bar & Grill. Opened in 1920, at one point it was something of a celebrity hang out spot; photos line the walls of everyone from Marilyn Monroe to John Wayne and even some young Presidents enjoying a drink at the establishment. Part of its popularity stems from its origins in the Prohibition Era, meaning that Texas residents could walk across the bridge to get a drink here while their city was dry. It helped too that the decor seemed more inspired by the United States than it did its local area. Even today, it’s still a popular spot due to its low cost, where for a few dollars you can enjoy a Margarita and a Beer.

Someone told me they claim to have invented the Margarita, and while that’s unlikely, it seems like it at the very least was in part responsible for its spreading popularity thanks to its proximity to the border. And it was damn good, too. So head to Juarez, grab yourself food and tequila pretty much everywhere you see it. It’s cheap, delicious and makes for one wonderful afternoon.

For Breakfast Beers (and Sunday Brunch): The Hoppy Monk 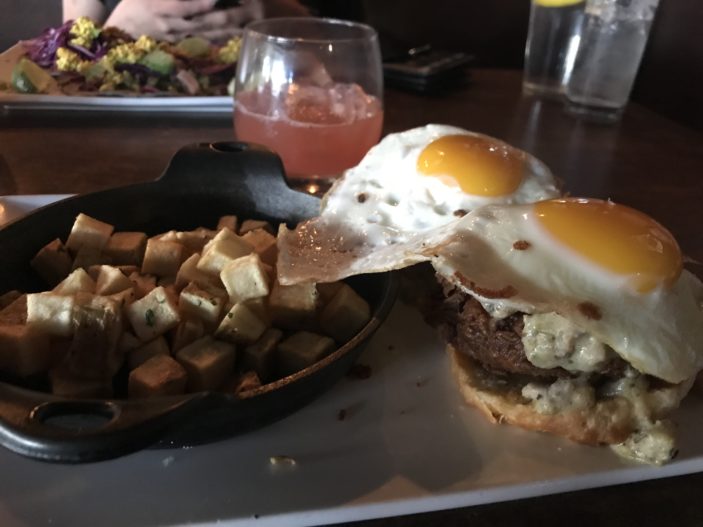 Back across the border, The Hoppy Monk feels like it’s a staple in the city; with no less than 99 independent beers on tap, and a massive collection of spirits and craft cocktails, they cater to a thirsty crowd. And let me tell you, those cocktails are magnificent. But so is their brunch, which is served all day on Sunday, and features pretty spectacular spreads that cost anywhere between $8 for the “Brunchwich” and $14 for the Fried Chicken with Biscuits and Gravy. I had the bacon and egg burger with an extra egg – because I’m just fancy like that, and a side of country potatoes. It was pretty damn good, and I’m told their regular menu is pretty fantastic as well; in fact it’s going to be some of the best non-Mexican food you’ll find in the area. But don’t worry, they also do breakfast tacos.

But if you do want some Mexican food, don’t go past Lucy’s Cafe. Situated in what feels like an old motel, Lucy’s is a classic American diner. Just one row of seats at the bar, and you order yourself tacos, quesadillas, pancakes, huevos rancheros, burgers, steak picado and pretty much anything else you can think of – all for $7 and under. The dishes are presented with no grand design; just excellent, greasy Mexican food, straight off the grill – and having been in operation since 1972, it’s of little surprise why it’s lasted this long. There are three locations, but make sure you get the original at 1305 N Mesa.

For Pizza: The Pizza Joint 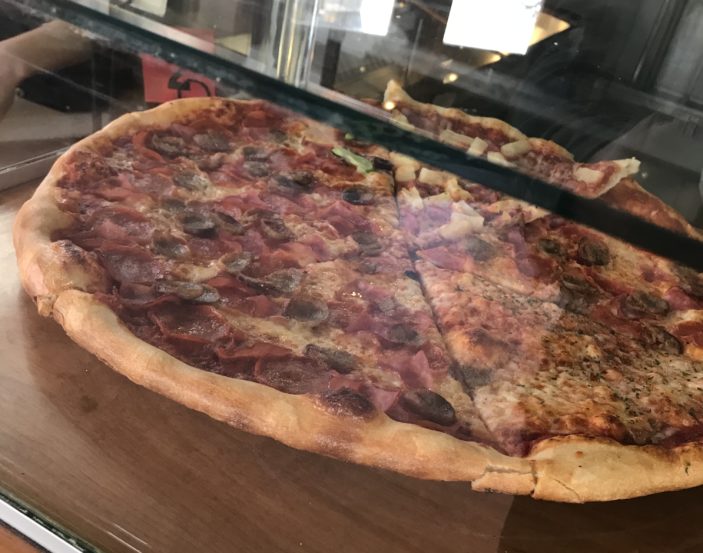 With pizza by the slice, whole pies, “Spliffs” and “Joints”, as well as baked wings and salads, The Pizza Joint offer a mountain of pizza options, and deliver some incredibly tasty slices that are of decent size, great value and excellent quality. If you’re staying at the Hotel Indigo, the location listed here is just a short walk away – so if you’re with a friend or two, consider grabbing yourself a whole pie and take it back to your hotel room. But it’s a bit of a chain in the city, with multiple locations popping up as the Joint has been fast spreading since first popping up in 2011. 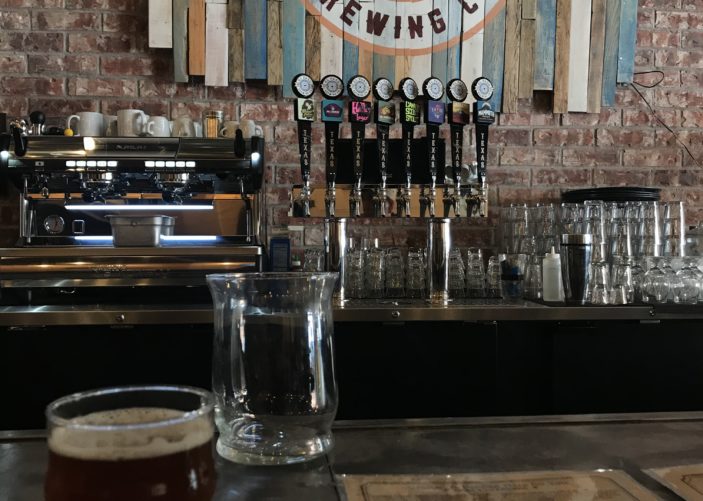 If you want to check out some local brews, you can’t look past the El Paso Brewing Company. It’s all in the name after all. I was there on a Tuesday and got to enjoy some tacos too – $5 for 3, with plenty of options, including vegan friendly ones. But even if it’s not Tuesday, you’ll only pay $6-7 for the trio. Beers are a bargain too, at $4 for 10oz of almost any of their beers. The Helles Lager and the El Sol Rye Saison were the highlights – high alcohol content too, and low IBUs on those two. Definitely don’t leave El Paso without trying a couple. 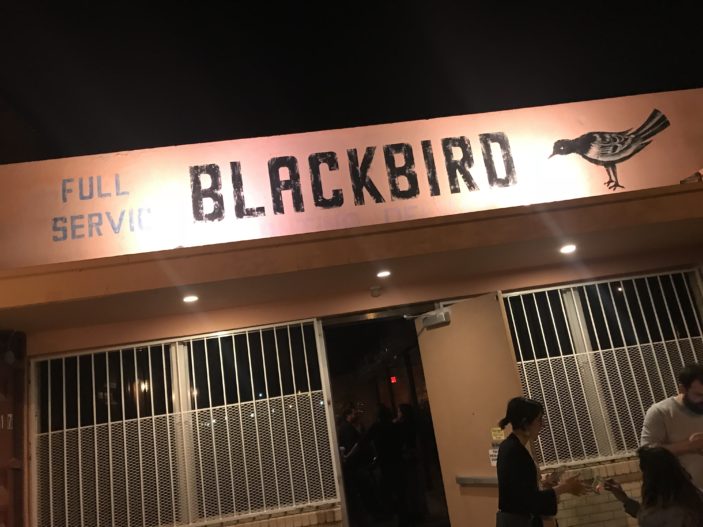 And finally, we come to the end of our journey, at a bar called Blackbird. I got to check out a few bars while I was in El Paso, and this was by far my favourite. Situated right near El Paso train station, you can sit in booths or at the bar, and should you be sitting at the bar, you may be thrown into a game of bingo (though they had a different name for it), where the prizes are, unsurprisingly, free drinks! And so if you happen to win, as I did, things are going to escalate pretty quickly. And in a place like El Paso, with an abundance of great food and drink, and a healthy splattering of bars like this to enjoy, it seems like the only way to truly end a night. After all, if you didn’t win a beer at Blackbird, did you even El Paso?

While in El Paso, the author stayed as a guest of the Hotel Indigo El Paso for two nights. The Hotel is located at 325 N Kansas St, El Paso, TX 79901, USA and you can find out more about the hotel HERE. All transport, flights, meals and other expenses were at the author’s expense.

Southwest flies daily to El Paso from many cities around the US, while American Airlines, Alaskan Airlines and Delta also offer services in and out of the city. The quickest way to get there from Australia is through a connection in either Los Angeles, Dallas (with Qantas) or Houston (with United).