Earlier in the month, we took you to Walt Disney World in Orlando. Today, however, we’re moving things to the nearby Universal Resort and the Cabana Bay Beach Resort, which opened on a 37 acre site some two years ago. It’s the fourth of five official on-site hotels currently operated by Loews, servicing the nearby theme parks Universal Studios Orlando, Islands of Adventure and The Wizarding World of Harry Potter, which runs across both parks.

The hotel employs a 1950’s theme throughout, which it sticks to with impressive detail. With the exception of the 40″ flat screen TVs in the rooms – and perhaps the fridge and microwave if you happen to be in a room with a kitchenette (as we were) – every shape and colour that you find in your rooms carries the theme, all the way down to the branding on the soap and shampoo in the bathroom. 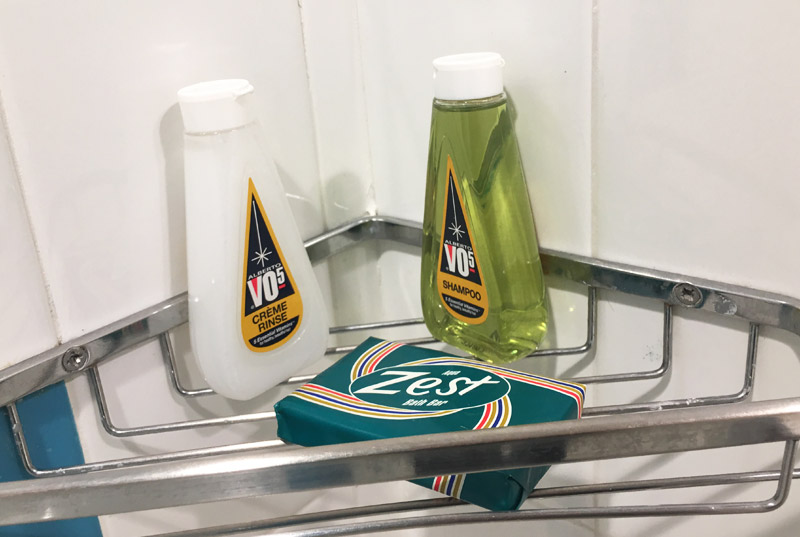 The attention to detail is particularly impressive given the sheer size of the property, and is notable from arrival: take in the exterior of the property, through to reception, the communal dining area and even the lighting fixtures in the hallways. By the time you get to your room, you’re already well versed in the concept of the hotel – and the bright colours or nostalgic décor starts to blend in with your modern reality. This is your life now, and you’re totally okay with it! 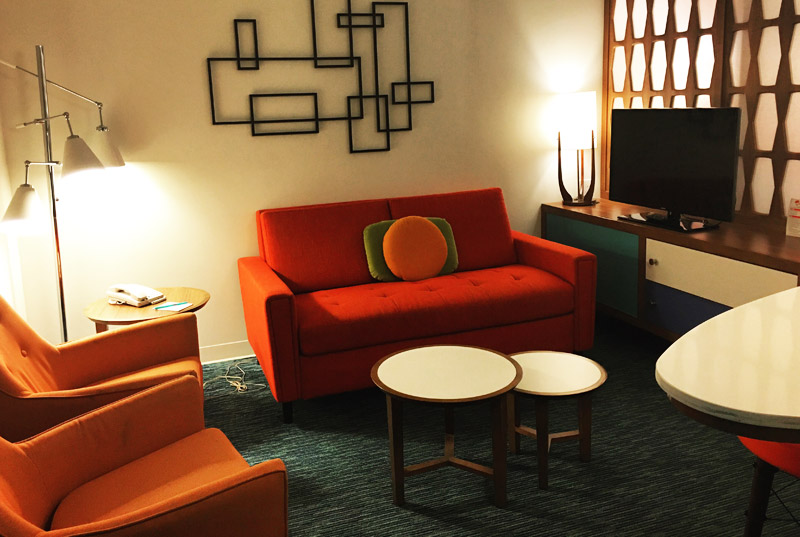 Our room was one of the larger rooms in the hotel – which has some 1,800 rooms available – a family suite with kitchenette. The room splits into two areas, a living area with kitchenette, and a bedroom with walk-in closet and bathroom, which itself is split up between the toilet and the shower. The room fits a lot of colour, with its unique furniture and artwork only highlighting it further. I loved the classic stools that sat in the kitchenette, and the couch, which pulls out into a bed to accommodate up to six people in the space, is mighty comfortable. 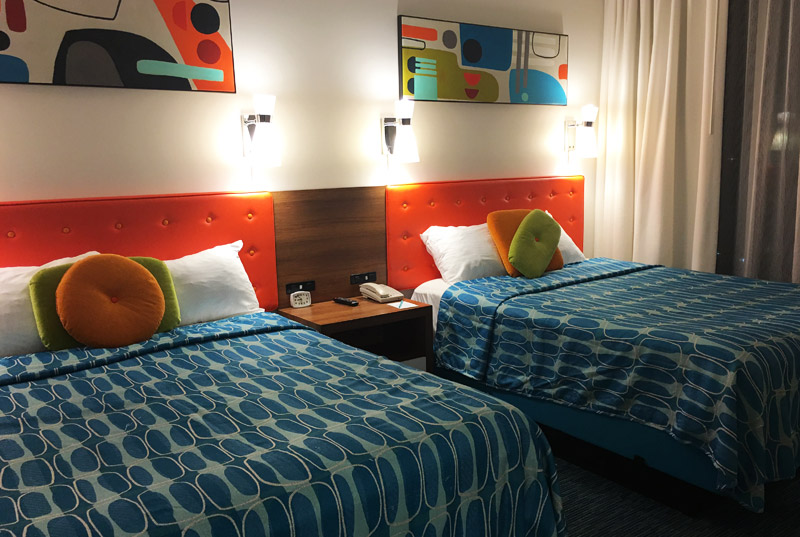 How great are those cushions, too? Though it looks amazing, there is just one practical issue with the layout. If you’re watching TV or have a light on in the living area, the sliding door which partitions the two main areas doesn’t stop light from bleeding through. This doesn’t have to be a negative though. If you are fitting a full family into the space, this will ensure all lights go out at the same time. Thankfully, telling your kids “we have roller coasters to go on tomorrow” is a pretty good incentive to get to sleep. The only other issue we had was that the towels were quite small – we don’t know if this is something that is reflective of the 1950s, or if they’re just trying to save a few dollars. But do take note!

The negatives end here, however. This is a superb hotel that will serve you and your family some great downtime from the nearby parks. They offer complimentary wi-fi for up to 5 devices, there’s a fantastic pool area, and the Bay Liner Diner offers an impressive range of food options throughout the day and night. It’s basically a buffet but you walk to each station and pay for each part. If you’re there for breakfast, I highly recommend the omelette, the ingredients of which you get to build yourself before it’s cooked right in front of you. 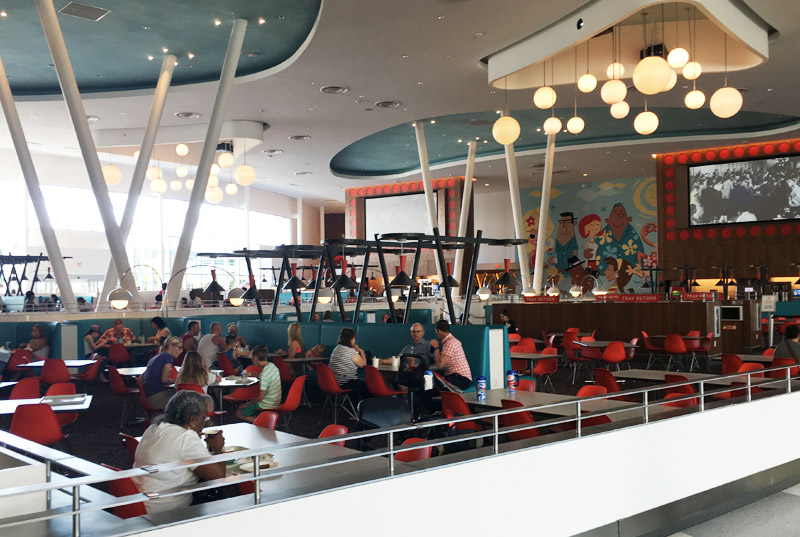 In addition to all the on site amenities, staying at the hotel also gives you an extra hour in the morning at Islands of Adventure and Hogsmeade of The Wizarding World of Harry Potter. The hotel offers regular shuttles between 7am and 2am, to and from the park’s entry. The earlier you can get out there the better – due to the high security on entry, it does take quite a while to get into the main park area, including the Universal CityWalk shopping and dining area. We left closer to 9am and were met with some pretty sizable queues. 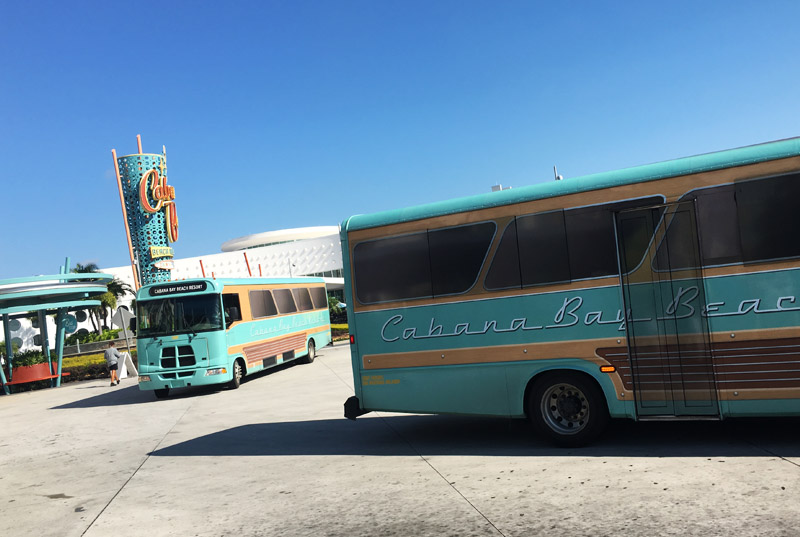 It won’t take you long to realise there’s quite a bit of construction happening in the area, too. That’s because right next door to the Cabana Bay Beach Resort they’re constructing a new water park called Volcano Bay, set to open next year. The foundations of volcano, which will sit at the heart of the park, could already be seen nearby.

Interestingly, though they’re in different locations, the park will replace Universal Orlando’s waterpark Wet ‘n Wild, which is currently the oldest Water Park in operation in the Orlando area. The old park will close at the end of this year, with Volcano Bay set to open in time for Summer 2017 – and this will certainly be the hotel of choice for guests attending the park, alongside the just-opened Loews Sapphire Falls Resort across the street, which has something of a Caribbean theme.

The Cabana Bay Beach Resort is located at 6550 Adventure Way, Orlando, FL. For more details head to their official website.

The writer stayed as a guest of the hotel. Photos by the author.

Australia welcomes @BenFolds this year, touring with many other Aussie orchestras!

"...it delivered glimpses of comedy gold, and allowed young performers an opportunity to make their grand musical debut..."

It also has @hayleymarymusic
helping out on vocals

It's hard to believe he only played his first live show late last year.