Hotel Review: 25hours Hotel The Circle in Cologne is a 1960s space themed experience like no other (Germany)

Part of the AccorHotels group, 25hours Hotels are a unique run of hotels around Europe; currently boasting 12 hotels across 8 cities. The brand runs on the slogan “Come As You Are”, in reference to the iconic Nirvana song, a sentiment amplified by the fact that no hotel in the brand is like the next. Reminiscent of IHG’s Hotel Indigo chain, the concept behind 25hours is about adapting to the unique spaces they inhabit, rather than try and force a generic look and feel into every property.

In the Friesenviertel district of Cologne, Germany, sits one of the most striking properties of the brand, “The Circle”, which is built into the unique architecture that once served as the admin building for the Gerling Insurance Group. Originally built in 1966, at the height of the space race, the offices are built around an awe-inspiring rotunda, which not only inspires the name of the hotel, but its very concept. With two coloured space craft sitting in the water outside the front doors, stepping into the rotunda’s front doors may as well have been a phone booth out of Doctor Who. 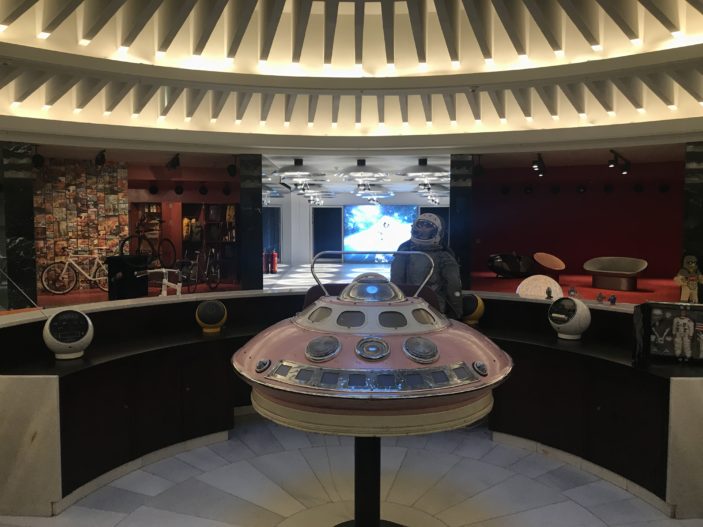 At the centre of the room is a pink space ship, which sits next to an astronaut’s spacesuit from the 1960s, and a bunch of contraptions that brings to mind something like the console from Doctor Who. Elsewhere,as Daleks and other space themed creatures occupy the large space. This is the future that the 1960s and 70s envisaged, all put together to make The Circle – which opened on 19th July and was designed by Studio Aisslinger – one of the most inspired and exciting hotels you’ll ever step inside. 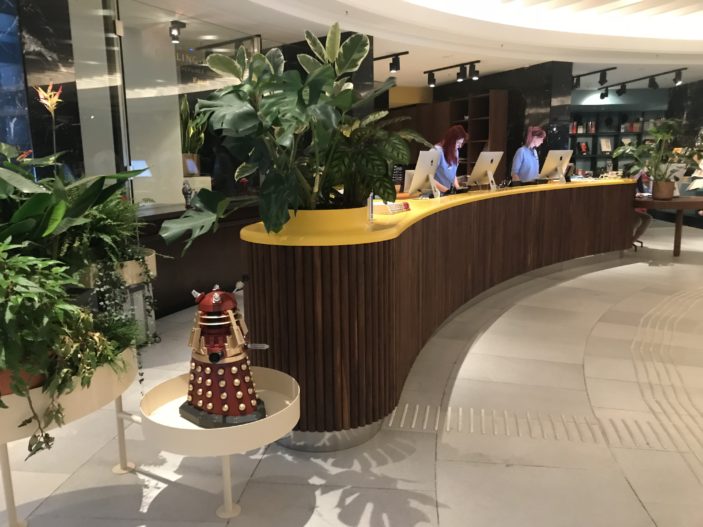 The lobby is filled with a unique gift shop (which sell the stuffed animals they have in the rooms), a cafe, and a number of places to sit down and relax. There’s even a vinyl playing station, which you can see below, with the headphones ready for use and a wide array of records for you to choose from or purchase. And given the theme of the hotel, don’t be surprised to hear music that has been specifically chosen to match the atmosphere – from the classic sounds of David Bowie, to new releases from Portugal. The Man. 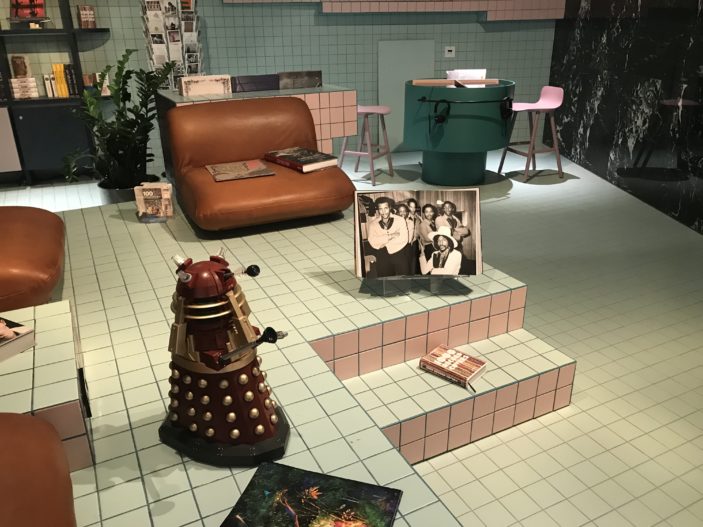 The retro-futurist hotel features 207 rooms across seven floors – each with hallways featuring large numbers and flickering lights, giving off the feel of a spaceship, thanks in great part to the building’s circular design. There’s a sauna and spa on level 7, but it wasn’t yet open when I visited at the end of August. The restaurant NENI sits alongside the Monkey Bar on the eighth floor, which provides a spectacular view of the surrounding city – including the iconic Cologne Cathedral and the Cologne Tower. It’s up here, too, that they offer breakfast from 630am to 1030am.

Though the view is amazing, the hotel’s buffet is a little underwhelming. There are only a couple of hot food options – scrambled eggs and hard bacon, hard-boiled eggs – though they do seem to make fried eggs on request. There is, however, an excellent cold meats and cheese selection, accompanied by pastries and breads, but they seem to go pretty quickly. There’s also coffee, a few juice options and loose leaf teas. 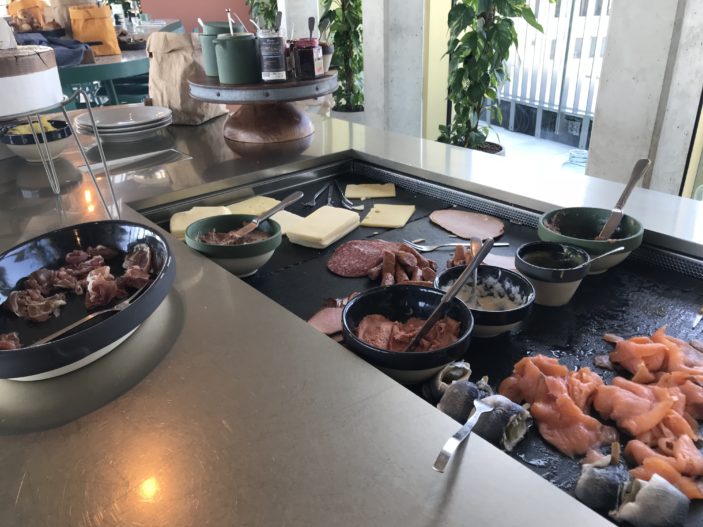 There are multiple types of rooms which they describe as “playful retro meets imaginative future utopias”. The two main room types are the “Inner Circle” and the “Outer Circle”. The latter (which I stayed in), feature lighter colours with warm wood tones, plants and an open plan bathroom that gives you a view out your window while you shower. It was an excellent shower with steaming hot water, stellar water pressure and two types of shower heads to choose from. 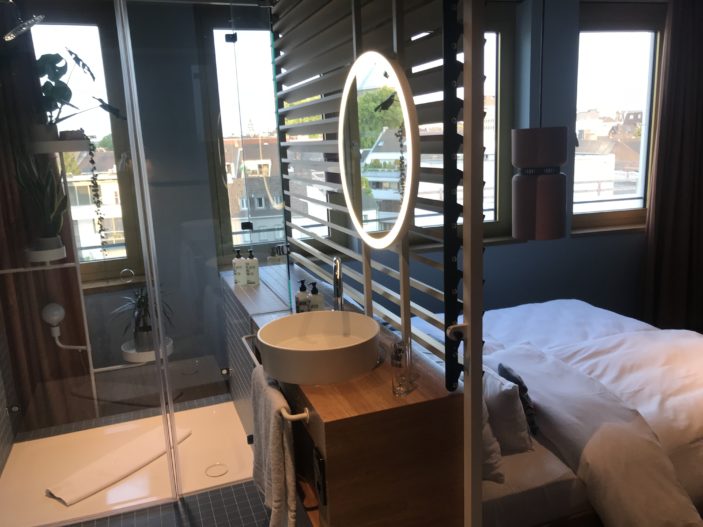 I love the dark blue colour of the tiles, and the plants sitting beside the shower serves a nice touch. There’s a button on the wall for a “foot heater” too, which seems to indicate that the floor may heat up, but I wasn’t able to tell if it worked or not; the room was pretty warm already given it was late August. Though the air conditioning was excellent. And though it’s all open planned, you can close the open metal blind to seperate the bathroom from the bed, should you need a bit of privacy.

Exposed concrete ceilings are a feature of all rooms, and all of them come with fast and reliable WiFi (under the name “25hours loves you”, because of course) and a UE Boom Bluetooth speaker. 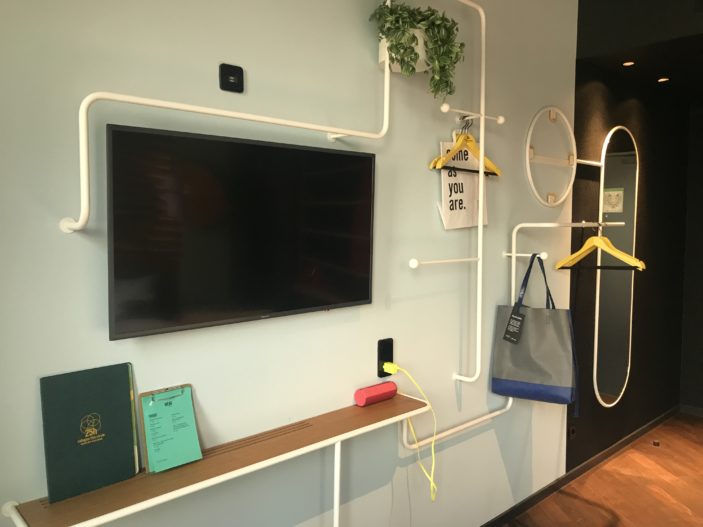 An excellent flat screen TV sits opposite the bed, and it features a tonne of channels, including news from all over the world sure to satisfy most languages – and of course the speaker to connect to for music. You’ll also find some hanging space here and a high quality FREITAG or canvasco bag you can borrow for your travels around the city. 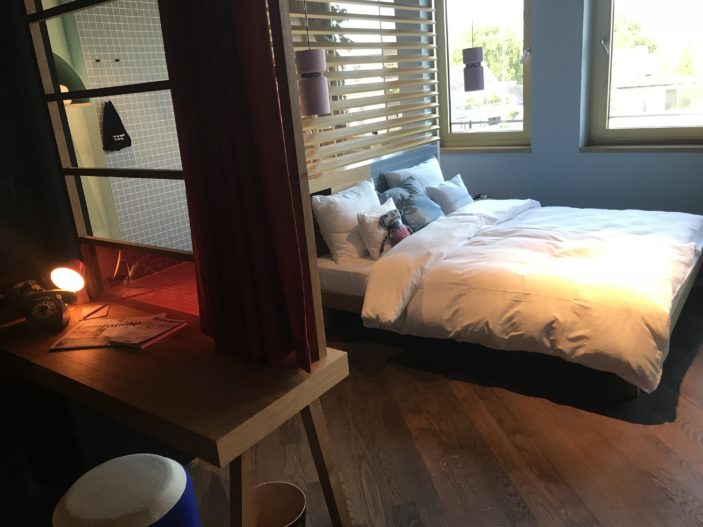 Off to the left of the room, just by the front door, you’ll find additional storage space as well as a desk which has the hotel’s own publication “Companion”, and a telephone and lamp from the 1960s – ensuring that every part of the hotel has been kept on brand. USB and AC chargers on the wall, however, ensures it’s not without the latest technological trimmings that will satisfy the needs of any modern traveller. 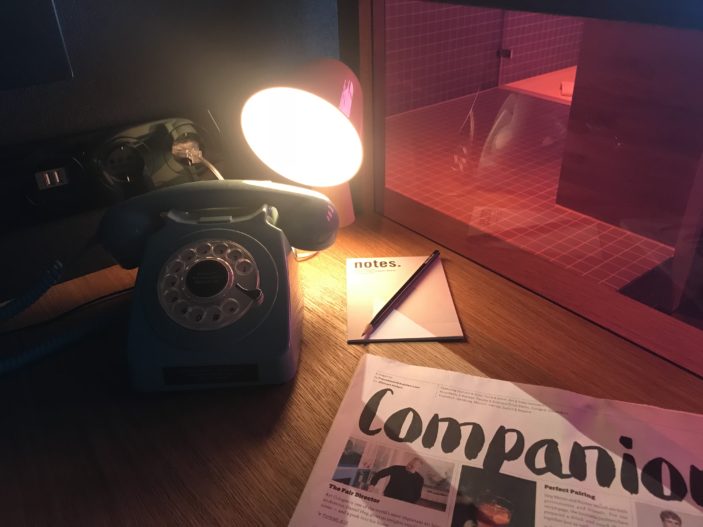 Here you’ll also find a mini fridge with a few options, including beer and snacks. Of course being the home of Kölsch, you’ll find Kölsch. 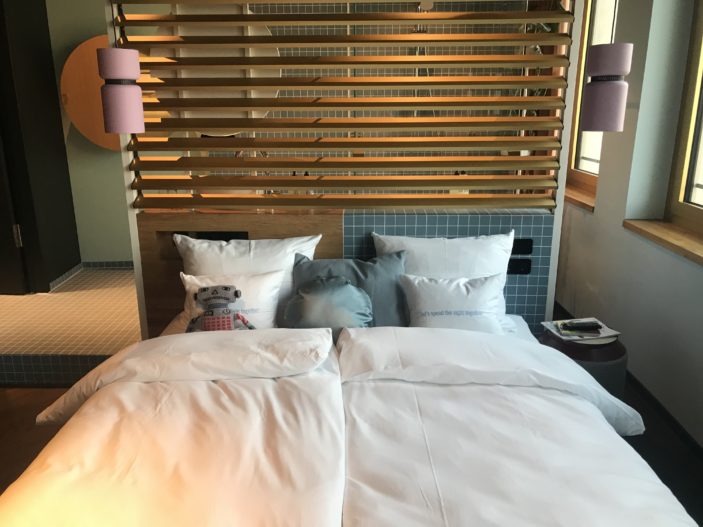 The bed itself is super comfortable Queen sized bed with a lot of decorative features, including branded pillows and a stuffed animal sitting in the bed. Mine was a robot and I called him Olaf. There are light switches next to the bed which allows you to control everything in the room bar the mirror at the sink. And like other beds I’ve stayed in in Germany, rather than a single doona / blanket across the bed, there’s actually two single doonas. Which makes some sense if there’s two of you, but less sense if there’s only one. It’s a German thing I guess? An Incredible Hulk comic book sat next next to bed, too. They really want you to embrace the inner child here. don’t they? And you can’t help but do so; there’s some child-like wonder when you enter the lobby.

And as for the Friesenviertel district, there are plenty of additional shopping, dining and entertaining options within a short walk of the hotel. In less than ten minutes I seemed to be at the heart of the main shopping area of the city. There was an endless amount of dining options at all hours of the day and night within minutes of the hotel, and it didn’t take too long to walk there from the city’s main train station (roughly 15 minutes). The hotel offer complimentary Schindelhauer bikes for rent and even free MINI cars for hire, which is unheard of.

You don’t stay in a 25hours Hotel because they’re the fanciest hotels in the world; you stay in a hotel like “The Circle” because sometimes you deserve to satisfy your inner child. There are plenty of hotels that will give you luxury, by this Cologne hotel gives you happiness; having not known anything about the hotel before I walked in, and I can’t tell you how much joy it gave me. And that’s not to say the hotel is without its luxury nor its trimmings either. But the trimmings it provides are more practical in nature than they are fancy – tote bags, MINI cars and a bluetooth speaker; things that can help make your destination feel like home, while ensuring you have everything you need to explore the city you’re in and make the most of your time in a retro-futurist paradise.

25hours Hotel – The Circle is located at Im Klapperhof 22-24, 50670 Köln, Germany. Check in starts from 3pm and check out is at Noon. For more details about the hotel, head to the official website.

The author stayed as a guest of the hotel for two nights.