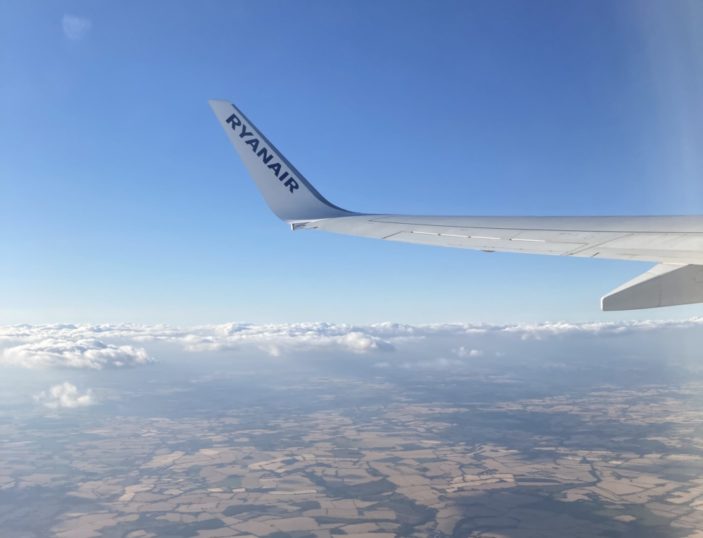 Once you’ve done the long-haul journey from Australia to Europe – where no one enjoys compromising on comfort or food quality – there’s often only one airline that is available for short, very affordable hops around the continent: Ryanair.

I was travelling from London to Bremen, Germany, and there were no direct flights from London Heathrow – but London Stansted had one Ryanair flight.

At the moment, everyone in England will tell you that you’ve got to arrive early for a flight – and I’m here to confirm this information.

Usually you can check in online and breeze through in five minutes with Ryanair, but this time the check-in process was disorganised and chaotic, with a massive line that barely moved for an hour. With all this confusion, I highly recommend arriving three hours before your flight just in case.

Arriving any earlier isn’t a good idea though, as London Stansted has no seats in the check-in area other than an uncomfortable pole-bench. Also, the airport is especially busy at the moment – perhaps it’s because of summer or the end of restrictions, but I recommend getting something to eat before you arrive, as the lines for the restaurants were tedious.

Thankfully, the negative experiences ended with the airport. What Ryanair lacked in check-in abilities, it made up for in flight efficiency. The flight was the only one on my whole trip that left exactly when planned to. Also, the ‘small bag’ carry-on – which you don’t have to pay extra for – seems quite lenient. There were a few people in the ‘non-priority’ line who had rather large backpacks and no one batted an eyelid. This isn’t a guarantee, as it might depend on the staff, but you can probably take a reasonably-sized backpack or a large handbag.

If you’re one of those people who rugs up for a flight – especially on the freezing long-hauls – then you can leave the scarf in your suitcase for Ryanair. It was a mild, warm temperature in the plane, which meant you could wear your light summery clothing in preparation for the holiday ahead. At about 7pm in the evening, it was still sunny as well as warm, and I enjoyed the beautiful views of the sun-bleached English fields sinking away below me.

For a budget airline, the seats weren’t too cramped, I’m about 170cm tall and I found it spacious enough. Also, if you like to have a drink to celebrate the beginning of a holiday, you’ll be happy to know Ryanair still provides a drink and snack service for a 45 minute flight (you have to pay extra for your drink). The flight attendants handled this speedy food delivery and the efficient transitions of the short flight with ease and they were all polite and friendly.

Bremen is a small, quiet airport, with only one flight from London Stansted arriving each day. When we flew in, we seemed to be the only plane at the airport. Arrival was extremely quick and my bag was one of only a few on the baggage carousel, so I picked it up immediately.

This Ryanair return flight was £96 (or $179) once I added on my 20kg suitcase – which is quite reasonable considering it was also the peak of our first restriction-free summer.

All in all, the flight was successful and efficient, and passengers just need to be prepared to arrive early at London Stansted airport.

To book with Ryanair head to ryanair.com

The writer flew at her own cost in July 2022. Header photo taken on board by the author.