Theatre Review: Moulin Rouge! is a wonderfully lavish musical experience like no other

Put on your finest dress, button up your best tux and step into an extravagant world of glitz, glamour and romance at the Moulin Rouge!

Based on Baz Luhrmann’s iconic 2001 film, it tells the story of an aspiring composer, Christian (Des Flanagan), who falls in love with Satine (Alinta Chidzey), a prominent cabaret actress and the star of the Moulin Rouge. Winner of 10 Tony awards, including the highest honour of Best Musical, Moulin Rouge! The Musical makes its international theatre debut in Melbourne – dressing up the Regent Theatre for a spectacular night of truth, beauty, freedom and love.

Let me set the stage for you. You enter the theatre to locate your seat only to be instantly stunned by the lavish interior, which has been decorated to the nines! Red curtains and sparkling chandeliers line the ceiling, a brightly-lit windmill rotates to your left and a blue elephant towers overhead to your right, with a neon sign front and centre welcoming you to the Moulin Rouge. Complete with performers already roaming the stage in top hats, ruffled dresses and fishnets, you’re instantly transported to the streets of 19th century Paris, ready to witness the birthplace of can-can cabaret.

Along the way, this jukebox musical presents mashups of some of the hottest (and cheesiest) modern and classic pop songs, guaranteed to light up the stage and appeal to a wide variety of audiences – from fans of Beyoncé and Lady Gaga to admirers of The Police and Whitney Houston. Each and every musical medley and mashup is beautifully arranged, making even the oddest of pairings – such as “Children of the Revolution” by T-Rex and “Royals” by Lorde – sound incredible when weaved together.

The integration of pop songs that have been released in the years since the original film is one of the show’s strong suits – ensuring it reaches younger casual theatre-goers, while also catering to fans of the music featured in the film. It’s fun to hear the tunes you love be belted out on stage, but what’s even more appealing is that every musical sequence and song choice complements the narrative and fits the tone of where the story is at in each moment. Some songs are used for comedic effect, some to build on the emotional storytelling and others to spark fiery dance numbers that make the audiences want to jump up in their seats and groove along.

Speaking of fiery dance numbers, there’s no shortage of dazzling choreography throughout the show’s biggest musical numbers. Helmed by award-winning choreographer Sonya Tayeh, each musical sequence is elevated greatly by brilliant pieces of choreography. The opening sequence, for example, is an extravagant arrangement of can-can dancers and cabaret, with a bit of a modern spin that gets the party started in fine fashion. One thing is for certain, audiences are guaranteed to be swept away in the wonder of the many dynamic dance numbers. 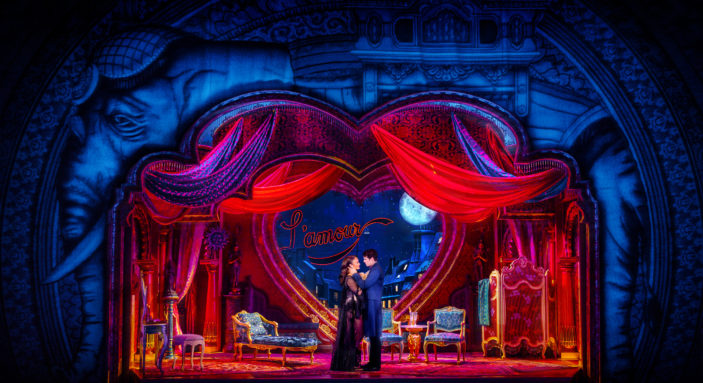 As the show progresses, one thing becomes abundantly clear – the luxuriously grand set design, orchestrated by Derek McLane, is the best that’s ever been put to stage. From the Parisian streets to Satine’s apartment and the opulent appearance of the Moulin Rouge itself, each set is as captivating to look at as the last. Plus, it’s not just stunning at a surface level – there’s real depth to the way each location is designed and the small additions that make it feel real and lived-in. The staging across the entire show is magnificent and Justin Townsend’s application of lighting is truly world-class. There’s one sequence where the entire stage is drenched in green light, all except for a single spotlight of white light that follows Christian around the stage, making him really pop against the background. From a technical standpoint, this is a remarkable achievement in musical theatre that far exceeds any expectations.

Bringing these songs and this narrative to life are the lead performances from Des Flanagan (Christian) and Alinta Chidzey (Satine), both of whom are mesmerising across every one of their scenes. There’s this radiant charm emanating from their performances, which ensures their respective journeys over the course of the show are equally as engaging. Their singing is beautiful, dancing is impeccable and they’re both impeccably captivating – making it hard to take your eyes off them at any point. The chemistry they share is clear as day and only makes it easier for audiences to buy into their budding romance. Also making a strong impact are the performances from Simon Burke (Harold Zidler), Tim Omaji (Toulouse-Lautrec) and Andrew Cook (The Duke), all of whom are entertaining and play their respective roles very well.

A spellbinding experience that revolutionises musical theatre as we know it, Moulin Rouge! The Musical is something truly special. Whether you’re an avid theatre-goer or coming fresh off seeing Baz Luhrmann’s film, you’ve never seen anything quite as grand as this. Featuring songs for multiple generations, weaved together in glorious musical mashups, there’s much to love about this approach to a jukebox musical. It’s not often something comes around that must be seen to be believed, but Moulin Rouge! is just that – a must-watch musical, guaranteed to leave audiences awestruck!

Moulin Rouge! The Musical is playing at the Regent Theatre in Melbourne through to April 29th. For more information and to purchase tickets, head HERE