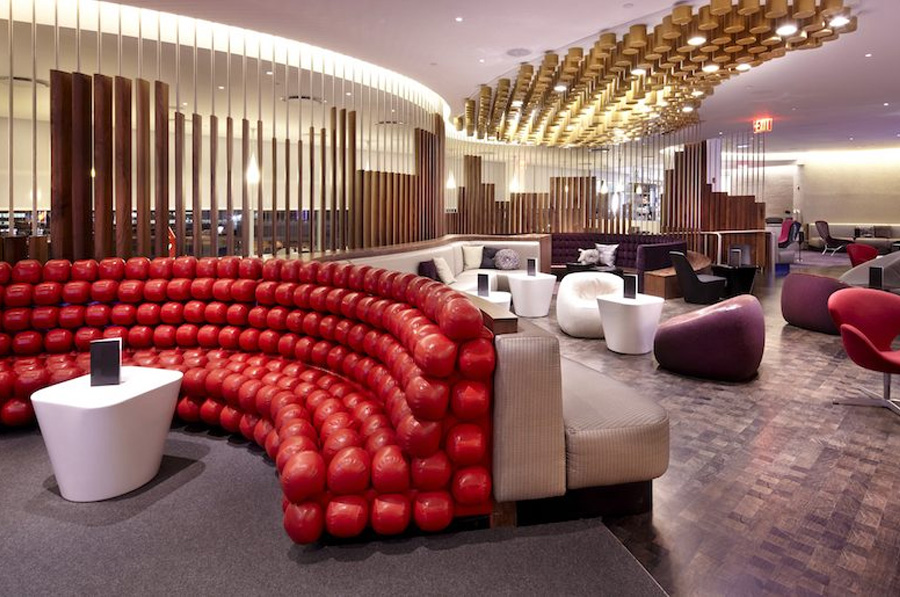 Last month, I jumped on board Virgin Atlantic’s red eye service from New York’s JFK Airport through to London’s Heathrow. As a Platinum member of Virgin Australia’s Velocity frequent flyer program, this gave me access to one of the best features of the Virgin Atlantic network – the “Revivals Lounge” at Heathrow. Given the airline’s flagship route is almost always a red eye, for those who have access, it will change the way you travel. Here’s a look at the flight, and the experience as a frequent flyer.

The Economy Light fare makes for some pretty affordable trans-Atlantic travel from Richard Branson’s first airline. You get the same on board experience, you just can’t choose your seat in advance without a fee, and no bags are included, and unlike with Delta, a Velocity platinum status won’t change that.

As a platinum velocity member you get Lounge access on both ends of your flight. You’ll also get this access if you’re a Flying Club gold member or travelling in the airline’s Upper Class.

At JFK, The Clubhouse (pictured above) has a playful design, with a pool table at the centre of the room, a spa in the back, table service around the venue and comfortable private showers and toilets. There’s plenty of space to work and different seating types that’ll suit any traveller. I took my shoes off and tucked into a large pod that had been built into the wall of the lounge.

There’s lots of free newspapers and magazines, and even some computers if you didn’t BYO. The on demand menu is as eclectic as it is delicious. From ribs to salads, Vietnamese salmon, burgers and Indian Currys, I traversed a mix of tastes from all over the world on a menu partly created by Donal Skehan. They also offer a breakfast menu before midday and an afternoon Tea from “Master Patisser” Eric Lanlard from 2pm to 6pm.

The service was wonderful, I enjoyed a complimentary 15 minute head massage which got me ready for a sleep on the plane, and had some great food and drink along the way. A beef stroganoff was the highlight, and the ribs were excellent too. It was a comfortable room, and a productive one too. Oh and there was an extensive cocktail menu – a rarity for a lounge, which was easily enjoyed.

Boarding was done gradually and by the time I got down from the lounge – still 40+ minutes from departure, there was no line until the end of the drawbridge. Overhead bins were just about full but I found a spot for my bags, and ended up with a spare seat next to me, so had plenty of room. Without that though I would have felt pretty squashed in. Legroom is pretty standard, and the seats are comfortable. I particularly like the headrests on the Virgin Atlantic service, even though the sides aren’t movable.

The screens on the back of the seats of the older A340 aircraft haven’t been updated in a long time and the quality isn’t great – the system they use too also meant some of my legroom was taken up by a pretty large box, presumably for the entertainment units. Again, this was solved by having a spare seat next to me. Pillows and blankets were on the seats, though no amenities kits. The bright red blankets have a unique design which is sort of like a bib, cutting out around your neck to hang over your shoulders.

While we waited for take off, ads played on the screens for the “Vera” entertainment units themselves, and the USB charging devices in the seats didn’t work. After the flight reached elevation though that service was turned on. There’s no AC plug in economy either. It’s not a touch screen, you use a removable remote, but shows and movies are on demand. Wi-Fi was available for a fee.

The red eye from New York to London is amongst my least favourite flights, given the short time it permits you to sleep. By the time they take off, serve dinner, and turn the lights off, you have only 3, 3 1/2 hours before they turn the lights back on. Though the progression of meal services wasn’t made clear before takeoff, a menu was handed out after takeoff that showed three meal options for dinner, chicken, sausage or a vegetarian gnocchi. A yoghurt and cereal bar would be served for breakfast shortly before landing. I also had the Revivals Lounge to look forward to at Heathrow, but few in Economy would have that to look forward to. For Virgin Australia frequent flyers, it’s an exclusive benefit of Velocity Platinum membership (something I have little chance of maintaining this year, so I’m going to enjoy it while it lasts!).

Staff were incredible helpful and lovely, which really is what Virgin sell internationally as part of their offering, and the Atlantic experience – which started it all – is certainly no exception

The service started soon after take off with a drink service, with sour cream and chive pretzels. Pretty much anything you wanted was available as a drink! Served in a classy purple cup of course. Hot disposable towels followed. About an hour after takeoff, meals were served. I had the gnocchi which was served in a basil marinara sauce with some cheese melted over it. It was tasty enough – but like any airplane food needed a bit of salt. It was served with a salty caramel “cakelove” dessert, a bottle of water, two types of cheese and crackers. A second drink service followed behind.

They didn’t try to wake people up if sleeping which was great, and they cleaned up people’s plates very quickly, leaving as much time for everyone to sleep as possible. With only a yogurt and a cookie as part of the breakfast offering, I slept through it – and had little trouble doing so. It’s also worth noting they are working to eliminate single use plastics on board, and made an announcement as such.

Arriving at Heathrow & The Revivals Lounge

There were some delays in landing due to weather and a backlog of planes in the air, but we still arrived early. Thankfully, entertainment worked until we arrived at the gate.

Passport control didn’t take too long, and within 45 minutes of landing I was in the revivals lounge enjoying a shower (even after struggling a bit to find the place). I was surprised there wasn’t a massive wait for a room – there was one ready for me when I arrived. This is due to the smart decision to not allow any guests into the lounge – though you can have a +1 in the clubhouse. This is designed for business travellers who need to rush to the office. And my goodness does it make he difference.

The shower room has hand creams, soaps, shampoos and everything you need. I loved the ability to choose from a number of radio stations to enjoy in the room while you had your shower too, and even control the volume – a nice Branson touch. And by now you have all your bags, so it’s an easy place to change into work attire and get ready to hit the ground running in London. After the shower, complimentary spa offerings are available, though I sat down for a full English breakfast (with tea, of course), which sits on a menu that’s available until 1.30pm.

In addition to the a la carte menu with table service, there’s some self serve cereals and fruits, with a few drinks out too. This is designed for travellers who are coming in from a red eye – and in spite of a number of morning arrivals, it wasn’t very busy. Food came out in minutes and it made for a phenomenal end to the trip.

This is among the best frequent flyer offerings in the world, though the experience was slightly let down by the older plane we used to get there. But if you’re lucky enough to have access to both lounges you’ll not only feel like a rock star, but have a level of pampering that will help make what is otherwise a frustrating red eye flight (in that you can never get enough sleep), not just bearable, but a great experience in itself.

For more details on Virgin’s Velocity Frequent Flyer service, head HERE. Bookings for Virgin Atlantic can be made HERE – and if you’re travelling via Hong Kong to London from Australia, you’ll have access to the Revivals Lounge at Heathrow as long as it’s a morning arrival.

The writer travelled at his own expense in May 2019.