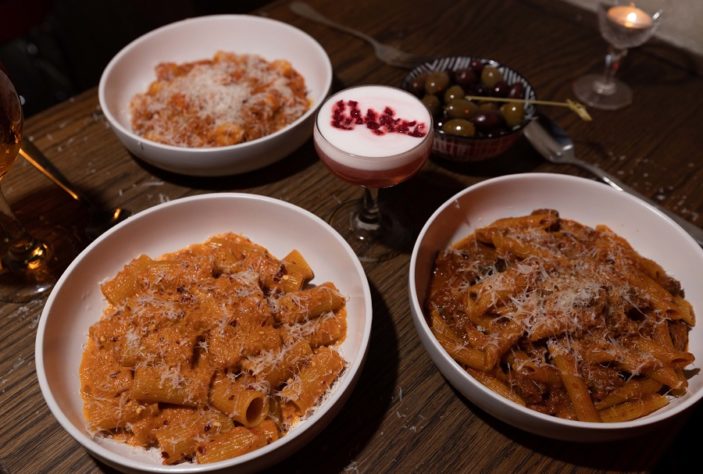 Since 2012, Vasco has been slapped with legendary status on Surry Hills’ Cleveland Street, stuck at the forefront of the kinetic strip amongst neighbourhood gems like The Norfolk, Brickfields, and Mjolner. That’s ten years of serving as the grungy neighbourhood cocktail bar, with renown for slinging some of the area’s best concoctions backed by a high-octane playlist of classic rock tunes.

And after ten years, the go-to watering hole has officially levelled up with a newly launched dinner menu designed to be as interesting and impactful as the bar’s dependable drinks list. Built in collaboration with ex-Matteo head chef Nicola Ronconi, food now steps up to the plate to match the vigour of Vasco’s magnetic atmosphere, long distinguished by its effortless balance of cocktail-culture elegance and 1980s rock electricity.

Crowd-pleasers already on repeat in my stomach include spicy vodka rigatoni; burrata brightened with fresh peaches, heirloom tomatoes, rocket pesto and amaretto; and a slick refresh of the kitchen’s signature homemade gnocchi salsiccia.

Those generously sized pasta dishes aren’t all that’s on order. The introduction of a pizza oven is the centrepiece of the kitchen and powers much of the new menu, pumping out six different pizzas. After a careful taste test, my recommendation is to dig deep and take yourself on a three-courser, starting with a classic Margherita, hopping over to the pumpkin four cheese with walnuts, and rounding out the palate with a flavour-packed Mediterranean punch of Napoletana with anchovies, capers and olives. Who even needs an encore with a line-up like that? 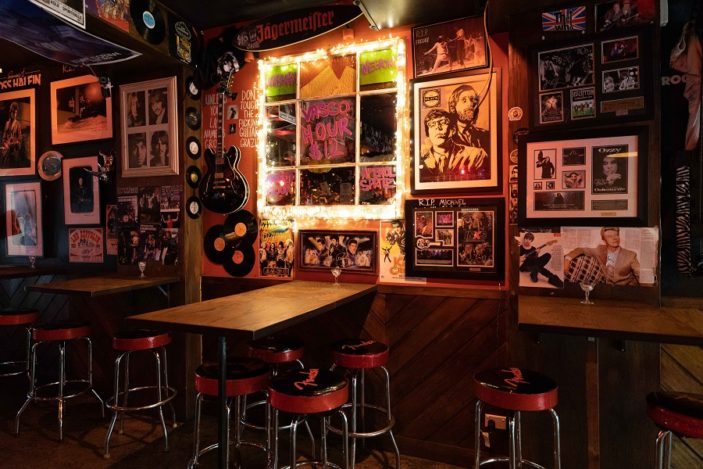 As much of a glow-up as the kitchen has received, Vasco is still just as serious about cocktails with a signature “setlist” of concoctions named after iconic tunes, including Sweet Caroline, made with Ketel One Vodka-spiked cold brew sweet peach tea, peach schnapps, citrus mint leaves, and a dash of lemonade. There’s also the Coffee & TV, blurring Bombay Gin with an infusion of coffee and orange, and layered with Disaronno, Campari, and Lillet Blanc, as well as a whole host of future classics that bang harder than a Black Keys concert.

Don’t forget the vibe itself. Staying true to its gritty rock & roll roots, Vasco is moody in between mouthful of antipasto. The walls pay homage to music legends past and present, with guitars adorning tabletops and a drum set draped over the bar top. There’s also a chorus of arcade and pinball machines that’s been affectionately tagged “loser buys shots” (of which the Vasco bar team abide as gospel… trust me, I know).

In the realm of Sydney’s ultra-modern dining scene, Vasco still stands as a vestige of inner-city cool, brash in its attitude but just as delicious and elevated as your favourite CBD Italian eatery.

Vasco’s signature happy hour remains between 5pm and 7pm, shaking $12 classics for guests to sample, swill, and savour. The new menu is available now from Tuesday through Saturday, 5pm till late.

Need another push? Vasco was recently listed as one of Boss Hunting’s best new restaurants in Sydney.

Naomi Rheinberger is a professional hotel stayer and skincare guinea pig who makes a living from talking and writing.