Maybe that was a bit too definitive.

Let’s just say, Sydney hotel restaurants are, for the most part, unmemorable. At least when compared to standard-pushing cities like Tokyo and New York City.

Although, I’ve never eaten at a Chicago, San Fran or L.A. hotel restaurant that inspired much enthusiasm either. They’ve all just been… good-not-great. Even the food at some of the most lavishly expensive properties can leave a lot to be desired, so it’s always an absolute treat when you run past a hotel restaurant that you’d happily return to any day of the week.

Mind you, I haven’t eaten at every hotel restaurant in Sydney. But, I’ve eaten at enough.

There’s been a few good hits. Mode Kitchen & Bar at Four Seasons has its moments. Hilton Sydney – which just had a substantial refurb – gets by just fine with Luke Mangan’s glass Brasserie. QT Sydney’s Gowings Bar & Grill – which just reopened – has never failed me, nor has the excellent Italian eats downstairs at Parlour Cucina (which just so happens to have the city’s best-kept-secret tiramisu).

Now I have another I can add to that list. Mister Percy. It’s a Eurocentric wine bar hidden away from the uninspiring waters of Darling Harbour. It gets by without needing the label of “hotel restaurant”, given that despite being the on-site eatery of retro-futurist boutique Ovolo 1888 and the hotel’s former lobby, it feels like a standalone venue. 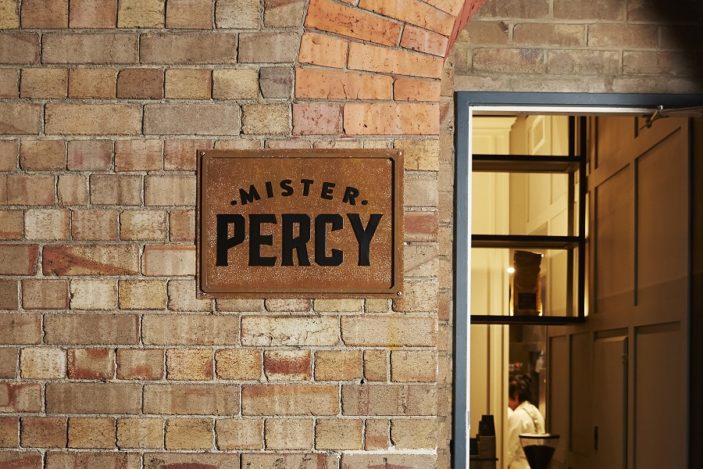 There’s even a separate entrance off eternally quiet Murray Street, presenting a well-kept and handsome space that completes the 90-room hotel’s story – the building used to house the city’s oldest wool store and draws much of its energy from that history.

The heritage certainly helps, with exposed brick set against colourful art pieces by Sydney artist Oliver Watts who pushes against the building’s patina with a lot of greens, reds and blues. Luchetti Krelle – who I’m fairly certain have never fallen short of pure interior magic – did a bang up job for the space, which echoes the kind of class and style you’d want when knocking through a primo wine list – one that has an obvious and justified love for Italy (though a disappointing lack of skin-contact wines). 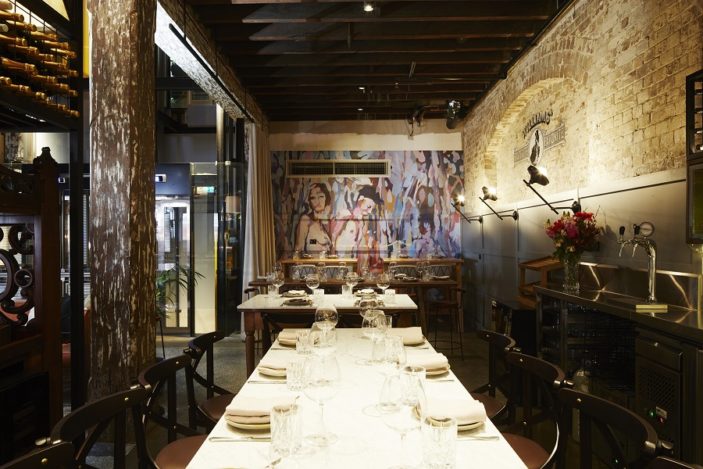 That’s a nice scene for a surprising all-vegetarian menu, deftly handled by new Head Chef Courtney Blyde, who has hopped across kitchen’s like the grungy Mary’s Pizzeria, the acclaimed The Apollo, and Cho Cho San. Here, he brings a nice energy to a produce-led, bistro-style menu that draws much of its flavour from ingredients sourced through Farmer and Son.

Clearly the scope of influence is wide open, although, much like the wine, there’s a slight preference to Italian. No complaints here. The pasta dishes were the reigning champions of the night. Deep fried gnocchi with truffle butter was the first to bring in that lip-smacking ‘wow’ factor. Even though the butter is slathered on quite thick, it’s a clear representation of Blyde’s faith in simplicity.

Smashed edameme is given life with umeboshi sesame seeds and some fried nori, while the side-highlight of orange roasted carrot with bay leaf, cloves and yoghurt tastes a literal million times better than the (very fucking weird) signature slow-cooked carrot I had at PRU – the only restaurant in Phuket that has ever been awarded a Michelin star (for reasons absolutely lost on me).

More on that tangential carrot from Phuket.

PRU’s kitchen team basically takes a carrot from their massive farm, wraps it in a banana leaf, and buries it. It’s slow-cooked for 8 hours in the soil from which it came.

The result is an exceptionally smoky and tender texture. The kitchen then serve’s it with fermented carrot juice, cured egg yolk, and what chef Jimmy Ophorst claims is “hollandaise sauce”. It’s not good.

Meanwhile Blyde just takes a well-sourced carrot, roasts it, adds some bay leaf, cloves and yoghurt, and blows ol’ Michelin starred soil-carrot out of the water. But it’s not just good comparatively, it’s a perfect reflection of Mister Percy’s ethos, right alongside the refreshing head of Iceberg that’s been lightly peppered with ranch, paprika and cheese.

Whoever said veggies are boring must have eaten at PRU, and not at Mister Percy.

Attention is then given to the humble potato. A stringy, delicious potato cake is served with curry sauce and herbs, proving a rather excellent carb-twin with the moreish plate of red wine spaghetti carbonara with eggplant “bacon”, black pepper and cured egg yolks (and absolutely no cream). As the affable Antonio Di Munno, Mister Percy’s restaurant manager, tells me, this is a pasta dish that’s yet to be added to the menu, but once it does, I feel it’s going to be the menu’s big-ticket order. Delicious.

The perspective Blyde has brought to Mister Percy is one of honest, heartfelt cooking with an unmistakable desire for showcasing how diverse an all-vegetarian, Eurocentric menu can be. Those are exactly the kind of restaurants more hotels around Sydney need. Not trying to appeal to guests of all tastes, but rather presenting them with a single idea expanded upon by a delicate grasp on beautiful produce.