There are few better ways to get to know a city than by eating your way through it.

Even if you live in that city, sometimes it takes being “in the know” to uncover the best spots. Thankfully, almost every major city in the world has a number of food tours which operate to serve that very purpose – catering to first time tourists, regular visitors and locals alike.

While I was in London, I jumped on board one of Eating Europe‘s food tours in the city, which they say has enjoyed some 25,000 guests since they launched in 2013. The Twilight Soho Food Tour is one of three they operate in the British capital, and sees the guide and their guests travel to five spots around the city’s West End, best known as Soho.

We met out of the front of The Spice of Life Pub and Music Bar, opposite The Palace Theatre, where Harry Potter and the Cursed Child is currently playing. Here, our guide Katie was getting the group acquainted with the city as (surprise, surprise) some light rain fell overhead.

It was immediately clear that this was going to be more than just a tour of the best places to eat in the famed area of culinary and theatrical experiences. It was also going to be a history lesson.

Quickly we learned that the area was once a private hunting ground of the 1st Duke of Monmouth, with “Soho” being a rallying cry of the time; this being at the very least the common conception of how the area got its name. But these days it’s better known as the place that has no less than 48 pubs in 1 square mile. So the rallying cries may be more of a less… discernible nature these days.

It’s also a part of London imbued with musical history – something which our guide was notably knowledgable of. You’ll walk past the legendary venue The Marquee which opened in 1958, and was home to the first ever performance by The Rolling Stones in 1962. Having closed in 2008, it’s sadly now The Soho Lofts. And while Paul McCartney’s publishing house, which you’ll also walk past, remains active, the famed Trident Studios is another location sadly lost in time and history.

But onto the food, which is why we’re all here.

Our first stop has two entrances – on one side, which sits opposite The Spice of Life, it looks like a normal Mexican restaurant. Though on the other, it hides behind an “Adult Video” sign under watchful, lit up eyes – a rather on the nose ode to Soho’s history as London’s red light district. Other dining spots we came across also played with this narrative, which I’ll get to later in the article. 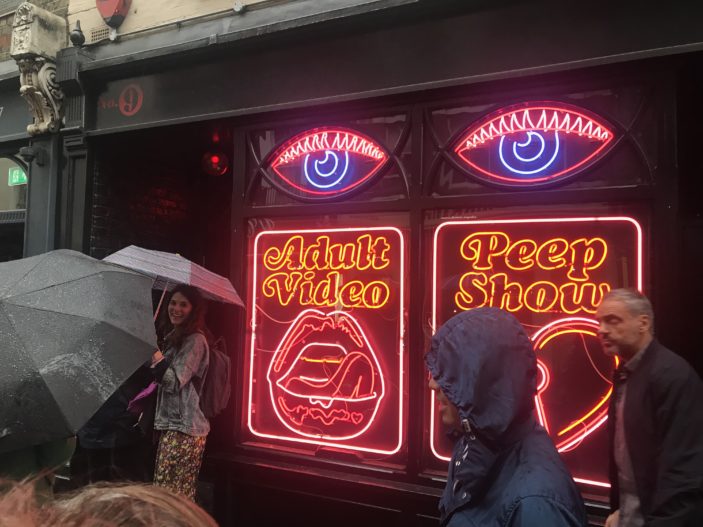 We got things started here with Passionfruit Frozen Margaritas and tacos – two to be exact, the first with cauliflower and avocado, and the second, fried chicken. Served on a soft corn taco, the fried chicken was divine, with a stunning crust. Would return for this dish alone. 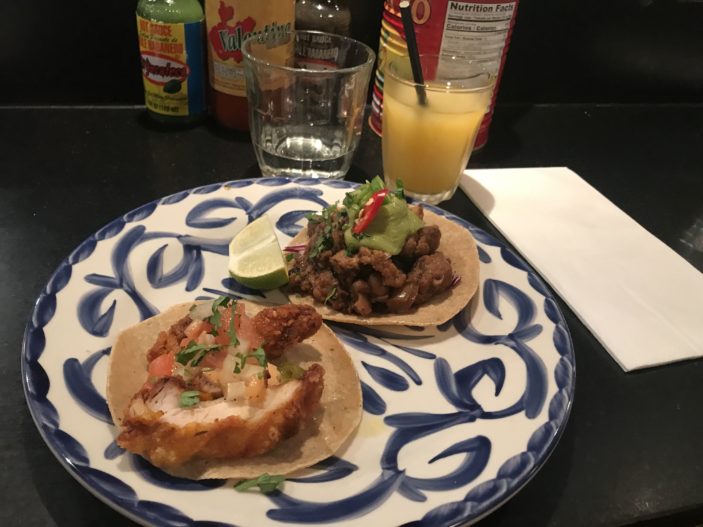 The Nellie Dean of Soho

We moved from Mexico to a more traditional British feed next, at the classic pub on Dean Street, The Nellie Dean of Soho. 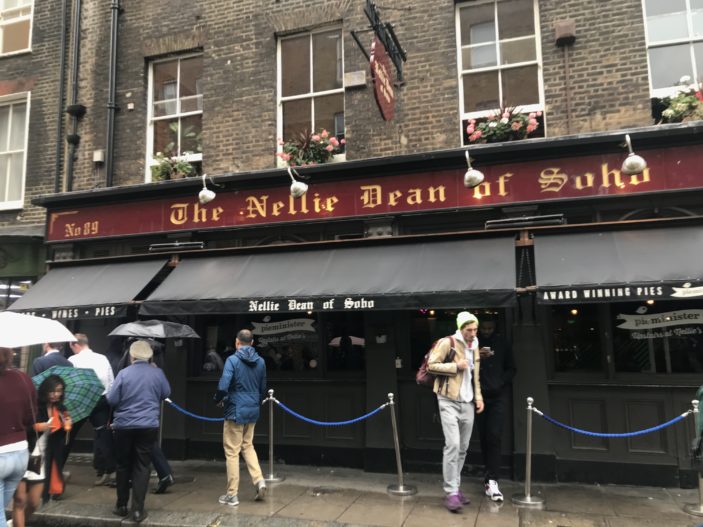 A half pint of Camden Hells Lager went down a treat after the earlier margarita, and it was served with a traditional Steak & Ale Pie, which they call the “Moo”. The pub is famed for its pies, and they serve nine regular varieties, including Vegetarian and Vegan options, with just as many options for toppings. Today though I just went for the standard Tomato Sauce. Sometimes all you need is the classic. 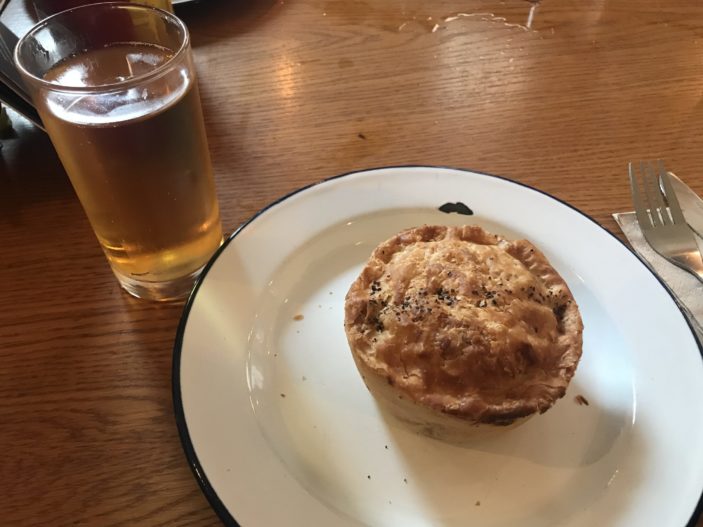 After a couple of spots unique to Soho, we next went to cleanse our palates by enjoy a tasting plate at Enquique Tomás – a name familiar to anyone who’s been to Spain. There are hundreds of these Jamon Iberico shops all over the country – and four have made their way to London, including one on Wardour Street in Soho.

The tasting plate saw a number of cuts of imported Spanish Jamon – like the Serrano, as well imported  Spanish cheese, like Manchego. And of course some Pan con Tomate. 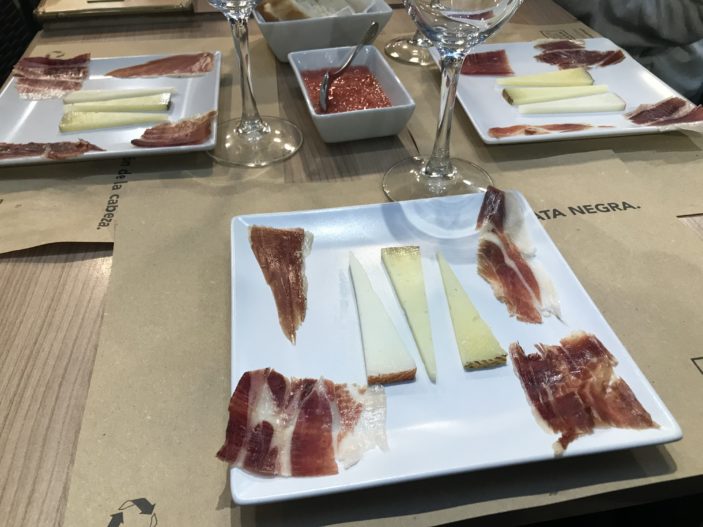 Speaking of international cuisine, bordering Soho is Chinatown, which set up in the West End in the 1970s.

More than 80 dining options exist in the area – and its one of the most popular places for locals and tourists to dine in the city. As with most Chinatowns, you’ll find some of London’s most affordable dining options here; experiences to suit any budget. On the fancier side of the coin, you might find yourself up a large set of stairs at Opium, where you’ll enjoy dumplings like their king prawn shu mai, and cocktails served in teapots (which take me back to my World Bar days in Sydney). 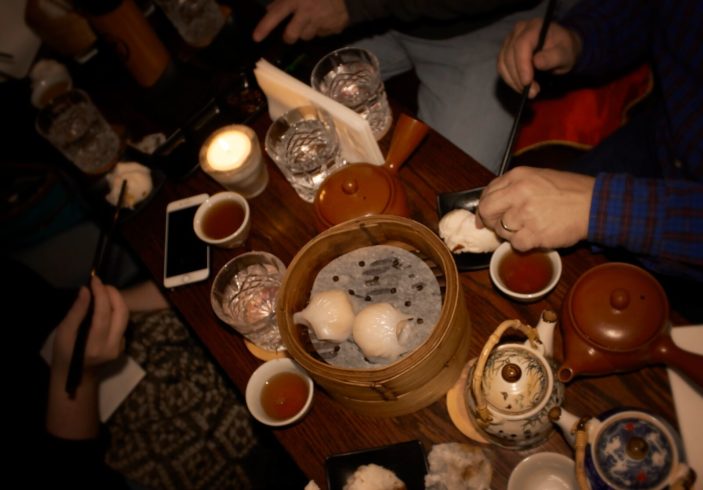 We had the cocktail “A Rose By Any Other Name”, which had antique rose tea, rose vodka, rose vermout and champagne. I’ve got to say that it, and the dumplings, were truly delicious.

No night would be complete without dessert, and though if you’d eaten all that we had, you may not have left any room. But when you see the work of art provided at Basement Sate, which is back in Soho, on Broadwick St, you’ll be hard pressed to say no. But that’s if you can find the place. Its black door entrance is easy to miss, and its own ode to the area’s history that started the tour only adds to the confusion. 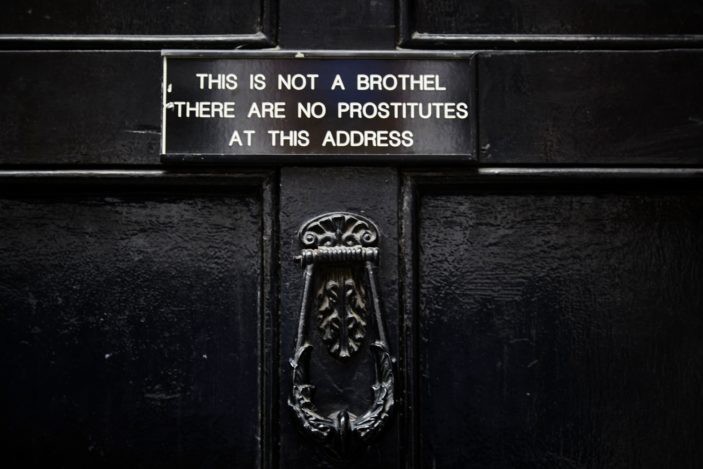 But prostitutes or not, it’s an understandably popular spot amongst locals for dessert and cocktails. Their french inspired desserts are truly works of art, and enjoy regular acclaim. One worth looking up is made to look like a lit cigar, yet is made of smoked dark chocolate, popping candy, chocolate whisky mousse & hazelnut praline crispy flakes.

The dish we were provided, pictured below, is the hazelnut chocolate Sherry sphere. 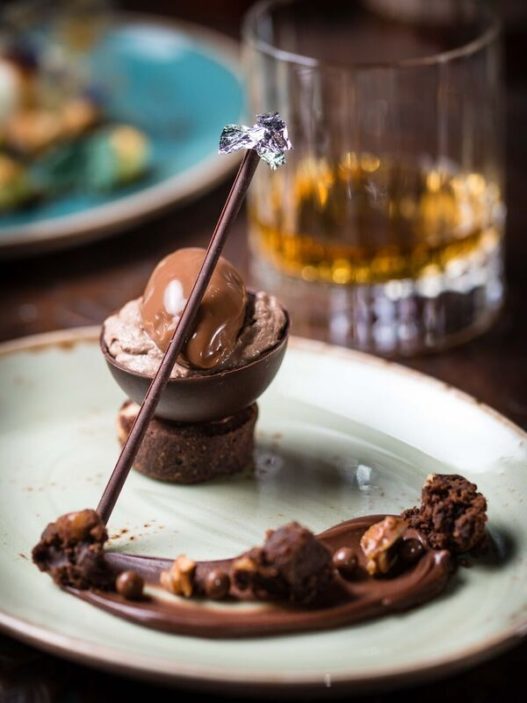 In addition to its divine dessert menu, they also offer a phenomenal whisky list, incredible cocktails and host regular tastings.

Jumping between Mexican, British, Spanish, Chinese and French cuisine on this tour is about as International a food tour as you’re ever going to find. And they’ve certainly nailed the quality, too. You will not leave hungry – nourished not just by the food, but by the knowledge of the area. It’s certainly something I’ll be carrying with me the next time I explore a part of the city I’ve walked through a million times, but now realise I never truly noticed.

The tour runs Monday to Friday, with sessions starting between 4pm and 5.30pm, and lasts about three and a half hours.

Oh and make sure to be on the look out for the seven “noses” that are hidden throughout the area. Even our guide said she hadn’t been able to find them all.

For more details on this tour, and others like it, head to EatingEurope.com.

The author was hosted by Eating Europe for this tour. Photos for Opium and Basement Sate were provided, as well as the headline image. The rest of the photos taken by the author.