Flight Review: We fly Scoot in Silence from Sydney to Singapore (TR3) 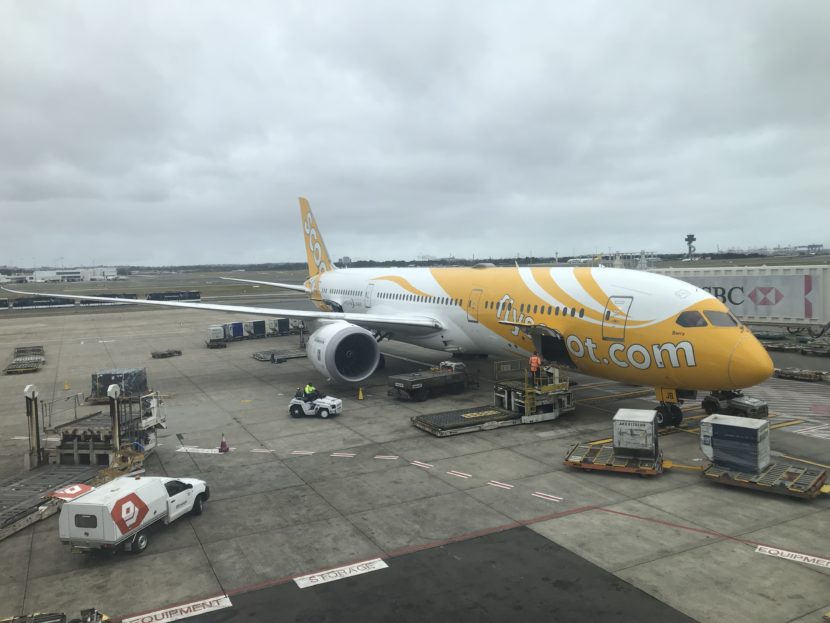 Singapore Airline’s budget carrier Scoot has been carrying passengers from Australia to Singapore for years now, but many travellers may not know about its “Scoot-in-Silence” offering; a section between the airline’s “ScootBiz” Business Class offering and the standard economy section.

With just five rows, the section is given its name by offering a quieter in-flight experience, with no children under 12 permitted in the section, comfier seats and extra legroom. And it costs just a tiny bit more than the normal economy service. But is the extra expense, however small it might be, worth it? We flew from Sydney to Singapore to find out.

Check-In and Baggage at Sydney Airport

Arriving two hours before the flight greeted me to one of the longest queues I’ve seen for the airline; but it moved quickly and I was checked in with 20 minutes to spare. Baggage isn’t included with a standard ticket, so make sure you pre-purchase it before you arrive at the airport to avoid massive fees.

Scoot-in-Silence gives you enjoyable extras on board in terms of some extra leg room, but don’t expect any priority boarding or check-in unless you pay for it separately or are flying ScootBiz.

It was all a bit of mayhem by the time I got to my gate in the recently upgraded Sydney International Terminal – though isn’t the new terminal nice? Wolfgang Puck has his first Australian restaurant here. And make sure you check out the new McDonalds! You’ll see what I mean…

Meanwhile at the gate, boarding started a few minutes before the plane was due to depart, and there was a slow boarding process as people lined up in the wrong zones. They start calling zone 1 first, and then jump to zone 4. Scoot-in-Silence is zone 2, but you just get thrown in with anyone else. So it was all a bit confusing. But we got there in the end. Honestly I just sat down and waited for everything to calm down, and thankfully there was plenty of room in the cabin for my bag. We departed about half an hour late.

Sitting at the front of the cabin in a “super seat”, I found it comfortable, with a great headrest that’s both movable and has flaps, which is only available in such seats. It has 34” seat pitch, versus 31” in main economy cabin, and having flown in the latter, it does make a big difference. And being at the front of the cabin, I had literally infinite leg room thanks to being in the aisle and having the aisle as my leg room, gradually encroaching into ScootBiz territory. As you can imagine though, this did mean you had crew knocking into you a lot.

As is always my major gripe with the bulkhead seat, too, is that you can’t spread out if you do have a spare seat next to you (I didn’t), and indeed if you’re in the aisle as I was you’re more than likely to be knocked anytime a crew member comes by because you’re essentially in the aisle. In that respect, it’s one of the worst seats on the entire aircraft. But if you need legroom, it’s fantastic and called a “stretch seat” for good reason. In addition, everyone else in the row can jump over you easily so you don’t have to worry about moving for people. And, even better – no seat leaning back into you! And one of the rare advantages of bulkhead seats in Scoot-in-Silence – there is a guarantee of no kids under 12! Oh what heaven is this!

ScooTV is an app you should download before you board the flight if you want some entertainment. Then it’s US$11 to watch all the film and TV you want through the app. You can also use wifi on board, but it’s not cheap. US$5.99 for 20MB, which would surely run out on social media or email in minutes. This goes up to $65.99 for 500MB. The next to me was having a lot of wifi problems and they had to refund him, and I didn’t use the ScooTV app, so I can’t speak to the quality of either from personal experience. But there was a great selection of shows and movies on there, so I’m sure it worked a treat. I’ve progressed to the “Netflix Download” option on my phone I have to admit.

I pre-purchased a “preorder combo meal” when I booked the flight; thankfully this includes water or coke now. Water used to not be an option as part of the combo, which was a ridiculous choice for an airline that seemed to want to dehydrate their customers with caffeine heavy drinks. So it’s good to see they rectified this. The hot meal also comes with a cookie. For a few extra dollars, you can also choose a “premium selection meal” which comes with a small water, salad and ice cream. Those who have pre-purchased these emails are served first.

The “premium selection” service commenced not long after we hit elevation. Preorder combos came a bit later. And with only one service on the flight in terms of the preordered meals, it’s a long wait then until a meal on landing. But quite good if you want to sleep the whole flight. It’ll cost you S$12 for a hot meal or $15 for a hot meal with a water. I had the nasi lemak meal with water and a cookie, which was tasty enough and kept me going for most of the flight. Though I did spend 5 bucks on some two minute noodles towards the flight’s end.

It’s worth noting they make a strong point to shame anyone who brings their own food and drink on board the flight with announcements and coming up and talking to people. It’s fair enough to want to encourage people to purchase their on board food; but it’s an 8 hour flight and some people have dietary requirements that the on board food won’t satisfy. So it’s a bit much. Especially as it seemed a vast majority of passengers seem to preorder food. This said, when the woman next to me pulled out a cold, smelly bag of McDonald’s food a few hours into the flight, I started to see why they might ask for it.

The cabin crew were courteous and helpful for the most part, and they were constantly busy, doing a couple of passthroughs for duty free, and several food and drink services throughout the flight.

There was a little bit of turbulence, but a pretty smooth flight. Even though I was occasionally bumped into or had the curtain flailed over me, because it was a day flight, it wasn’t much of an issue. Had I been trying to sleep on the other hand…

When it comes to budget travel, it really doesn’t get much better than this. I would recommend a different seat than my one – I was too far in the aisle for my liking. But it’s a small gripe on what was fantastic service, with comfortable seats, great leg room and some true peace and quiet, even on a day flight. Sure there’s no Singapore Sling, but when you’re offering this service at 1/4 the price of that offered by Singapore Airlines, it’s hard to argue against it – especially for a day flight where sleep isn’t of concern. And as far as I know, there’s no where on a Singapore Airlines flight where you’re going to be free to screaming children…

And that is the sort of guarantee that might even see Business Class travellers flock to the service.

Scoot flies daily from a variety of locations around Australia to Singapore, including Perth, the Gold Coast and Sydney. For more details about the service, head to flyscoot.com.

The writer flew as a guest of the airline in September 2018.