Flight Review: Premium Economy from Sydney to Noumea with Aircalin 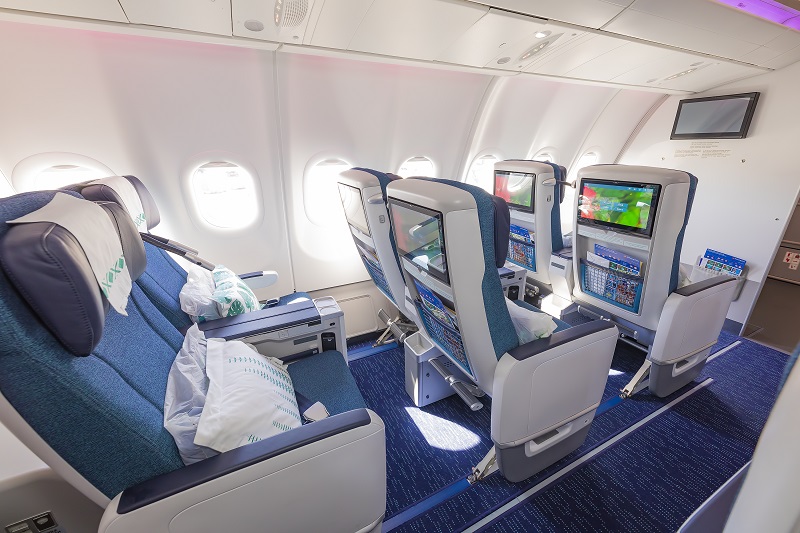 New Caledonia’s flagship carrier Aircalin now have the distinction of being the first ever airline to bring the new-age A330neo aircraft to Asia-Pacific. And of course they’ve used that considerable boost in capacity to enhance their Sydney to Noumea service, making the journey for Aussies looking to explore New Caledonia not just more accessible, but substantially more comfortable.

Aircalin allows for two pieces of checked luggage up to 23kg, which is very generous. Carry-on is a standard 7kg limit though.

Sydney Airport may not be as large as some other international hubs, but it can still take a significant amount of time to walk from security to gate if it’s any number around 56. That’s exactly what my gate was, right at the tail-end of the airport which takes about 6-10 minutes to walk to from the main area (where the McDonalds is). Basically, make sure you’re not dawdling when it comes time to board.

Do note that there is a small convenience shop directly next to gate 56 so don’t bother stocking up on snacks and what not until you get there. That is, if you’re gate is the same.

Premium Economy is a spacious cabin splayed in a 2-3-2 configuration with only four rows. It all feels incredibly private and separate from the other cabins. Bottles of Evian water are handed out before take-off, which for me was slightly delayed. The scheduled departure time was 1:40pm, but we weren’t in the air until 40 minutes after that. We did land on time though.

I was seated in 10F, which is a middle aisle and a bulkhead. It’s easy to tell that the cabin is brand new – it’s all immaculately clean and looks great with the muted colours of blue and grey, reflecting elements of the New Caledonian landscape.

Leg room is obviously of no issue to me since the seat is a fair distance back from the wall, although those behind me have an airy 37.8″ pitch. Seat width is reasonable at 17.7″. Who needs business when these are perfect for such a short flight?

It certainly helps passengers that the new cabin features larger than average overhead bins, but since I’d only packed light for such a short trip, it was of no particular benefit to me.

A sleek and well-designed black remote controls all the necessary seat functions with large intuitive buttons.

Although Aircalin’s entertainment system certainly isn’t as extensive as bigger airlines, the bank of new and old films – I counted around 40 – is more than enough for a flight that’s just inching over 2 hours. I’m impressed by the 13.5″ high-definition touch screen which pops with colour accuracy and displays crisp visuals.

The entertainment system, which on the bulkhead typically slides out from the side of the seat, includes a USB for standard connectivity. Disappointingly, the touted Wi-Fi wasn’t available at that time, but there is a handy AC power outlet.

The earphones they give out are certainly better quality than a lot of headphones that often crack on one side, however they are still quite weak and the volume is capped at a low level.

Conveniently, a screen on each bulkhead displays flight information like distance travelled and time remaining, so you don’t have to disrupt whatever you’re viewing on your own personal screen.

Multi-lingual staff are exceptional and attentive, although that wouldn’t be hard with a smaller cabin that’s not even half full. Still, it’s all-smiles and quick turnarounds with any request.

Staff didn’t give me a choice in meal, but I wasn’t disappointed with my delicious roast chicken with sweet potato and diced vegetables. There’s a terrific and strong flavour here that’s often lost with any airline food that isn’t served in Business, and the tasty cheesecake only reiterated that fact. I wouldn’t bother grabbing something to eat before the flight – it’s very satisfying, although not too filling.

It’s worth nothing that the lavatory featured various scents and amenities from pump bottles that were able to be used for passengers to freshen up. Although you’d have to be a very infrequent flyer to need freshening up on a 2 hour flight. Still, it’s a nice touch that I’ve very rarely seen on other airlines.

We landed on time, welcomed by an exciting, picturesque view outside the window (due to the emptiness of the cabin, I moved to a window seat to get some photos). The countless small islands of earthy hues look incredible and dramatic set against the vast turquoise expanse.

Noumea’s La Tontouta International Airport is tiny and easy to move through. The group of journalists I was travelling with were all through to baggage claim in what seemed like only 10 or so minutes from landing.

There were so few things wrong with this Aircalin flight that it’s hard to find something to take issue with. I would have liked a choice between chicken and the other dish (smoked duck) and Wi-Fi would have been nice, but exceptionally comfortable seats, speedy service and a great deal of space easily made up for the small complaints. Having several amenities in the lavatory is a very nice touch, and while the entertainment system could use a bigger selection, the screen is brilliant.

This is worth the upgrade.

To book a flight to Noumea with Aircalin head to their website HERE.

The writer flew Aircalin as a guest of the airline. All opinions are that of the writer’s.