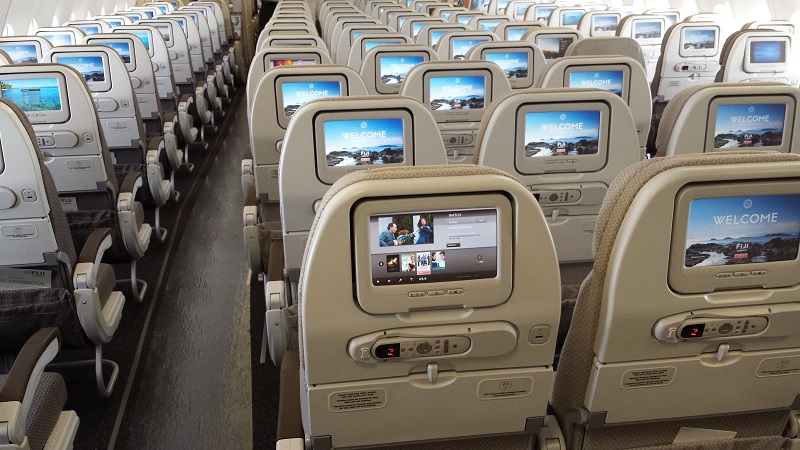 The short flight from Sydney to the pacific paradise of Fiji is one of the most frequented for keen Australian travellers looking for a quick and budget friendly escape. Fiji Airways, which has a codeshare agreement with Qantas, has long been known as one of the better and more comfortable ways to get there. So what do we think? We fly Sydney to Fiji’s hub of Nadi on FJ910 (Economy Class) to find out.

As is the deal with most flights out of Sydney Airport, the boarding experience is smooth and unfussed – as long as you’re paying attention to what gate you need to be at, and when.

It’s easy to get lost in any pre-flight rituals, and often people aren’t considering how long it takes to walk to the gate from which their flight boards.

For me, FJ 910 left from one of the furthest gates possible, so being aware of the walking time required was crucial, since I was mostly spending time in the main part of the terminal.

Fiji Airlines staff don’t waste time. Passenger arrival cards were handed out shortly after seat-belt signs were turned off, so you can quickly sign and forget about it for the rest of the flight.
Shortly after that, meal service kicked off at 2pm (Sydney time).

I was given my creamy chicken curry with rice at 2:09pm, chosen over the vegetarian option which was potato and chickpea curry with rice. This came with tasty New Zealand cheese and two crackers, as well as a chocolate biscuit which seemed to be trying to imitate tim tam; it tasted similar, but wasn’t quite as rich as Australia’s favourite biscuit. All in all, a very satisfying tray for an Economy meal.

Tea and coffee service came soon after trays are collected, at around 3:08pm.

Although this aircraft was clearly worn from age, the seats were still sufficiently comfortable and offered both good width and decent leg room. My knees weren’t touching the seat in front of me, unlike on plenty of other pacific island flights.

Note that those sitting on the aisle can actually raise the aisle-facing armrest, just search for the hold towards the back underneath the armrest and find the long, narrow button inside. This is included on most substantial commercial airlines – so less mobile passengers are able to be moved in and out of seats easily – but its still a relatively unknown secret amongst passengers.

Large, heavy blankets were handed out shortly after the seatbelt sign is first turned off. Although the aircraft wasn’t quite as cold as others I’ve been on, the great warmth of the blankets was certainly appreciated.

I should also note that the flight featured perhaps the biggest lavatory I’ve seen in an Economy Class.

Although there was no power point to charge devices, there was a USB point on the seat in front next to the average sized screen.

Fiji Airway’s entertainment system isn’t quite as modern and responsive as other newer systems, but the selection is a nicely curated collection of in-flight classics and new releases. Creed II, The Day After Tomorrow, The Best Exotic Hotel Marigold, This is Us, Grey’s Anatomy, and Friends stood out.

Aside from Film & TV, there isn’t much to the entertainment system aside from a comprehensive flight map and an “About Fiji” section, which passengers should watch as it’d likely steer them away from the mistake of just staying in Nadi the entire time they’re there. You won’t get a good idea of Fiji can offer if you’re only staying in its most developed centre.

Fiji is known as one of – if not the – happiest nation in the world. It’s also one of the most relaxed (could be all the Kava they drink), which comes with it’s own pros and cons. The most obvious pro is that you’re always going to get consistently friendly, genuine service both in the air and on the ground, while a con is the convenient excuse of “island time”, which doesn’t bode well when you’re expecting service of any kind.

In hotels I’ve found this to be more of an issue than in flights, with staff appropriately speedy with any requests. There’s a sincere sense that the staff really do want to take care of you, and you aren’t just a number to them, which by far is one of the best things about Fiji Airways.

It’s a cliché, but service with a smile really does make a difference. Fiji Airways staff are exceptional, comforting and enthusiastic. It reminds you how much of a difference good service can make, coupled with a decent amount of space and comfort of course.

The writer flew to Fiji as a guest of Fiji Kava.