We continue our Flight Review series, this time flying from Los Angeles to Toronto via Air Canada. Click through to check out Editor Larry Heath’s service review, covering everything from in-flight entertainment and meals to comfort and hot tips for traveling…

Flight Time: 4 Hours 40 Minutes (4 Hours 13 Minutes in the air)
On Schedule? Yes
Frequent Flyer Program: Aeroplan – As Air Canada is part of the Star Alliance Network, you will also points for partner airlines including Air New Zealand, whose loyalty program I’m a member of.
Lounge Access: None

Terminal 2 at LAX was in a state of construction madness when I arrived for my late morning flight… and as a result, there was only one hot food option: Starbucks. Naturally, I had a pretty terrible breakfast roll to get the day started. And somehow they messed up my cup of tea. Ugh, Starbucks. Way to ruin a day. But thankfully, the food on the flight was much more appetizing.

Firstly, it needs to be noted that food is not included in your ticket, which is frustrating for an otherwise full service long haul flight. They do offer free water, soft drinks, coffee, tea and juice. A meal with a snack starts at C$9.50. Credit cards are the only payment option. The Canadian dollar is near parity with the Australian at the time of printing so you don’t have to do much to figure out what it’s costing you (should you be using an Australian credit card, that is!)

I had a main meal with a snack for C$13.50. The main was the salmon with a ginger sauce and rice and the snack was a pre-packaged set of sabra pretzels with hummus dip. The set needed more pretzels (so much hummus though!) and it was a 15 minute wait for the hot food. But, quite surprisingly, the meal arrived sizeably on a hot plate, in what felt like a first class presentation. It was without question one of the best meals I’ve ever had in economy. I’m not sure if it was a fluke (e.g. I got an upper class presentation as they were out of economy presentation), or if that’s the normality on the airline. I’ll have to fly them again soon and let you know… 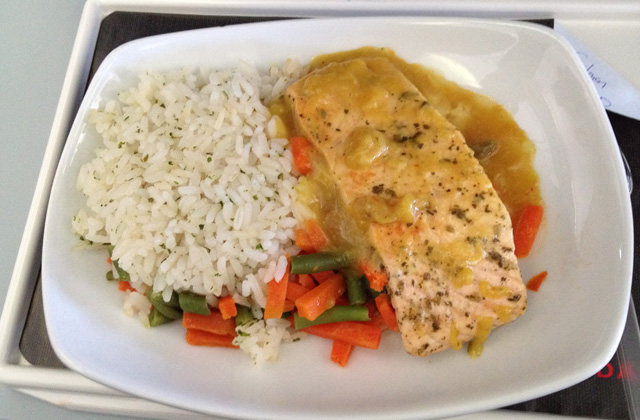 There were two services of food and drinks through the four hour flight, and crew were quick to grab you a glass of water on request.

Though the seats seem a touch on the older side, there is their “enroute” touch screen entertainment available from gate to gate. You can use your own headsets (single port), with English and French options on most films and TV series. There was a great mix of classic (including Criterion Collection selections) and contemporary cinema, TV and games provided to all seats. For those looking to work, or use their own device for entertainment, international Plugs for power are available on seats A, D, E and H (in economy) and there’s a USB port in every seat.

Travelling on a Boeing 767-300 is an all around comfortable experience. Though an older model, the 2-3-2 layout generally means less people around you. You don’t feel crammed all in. It helped, too, that it wasn’t a packed out flight. I was lucky enough to have a spare seat next to me which never hurts either, nor does not needing to try to sleep on a brief(ish) day flight!

Given this was an afternoon flight, of relatively short length, the window shades remained raised and lights on for the entirety of the flight. With the general colour of blue being a prominent theme amongst Air Canada flights, there was actually something very comfortable about it all. It was a calm flight, with little to no turbulence, great service and good food. Doesn’t get much better than that.

Air Canada is a terrific airline, and given the country they represent, one would expect friendly, helpful and polite staff. And indeed we enjoyed that the entire flight, from boarding at the mess that is currently LAX Terminal 2, to the time we arrived at Toronto International. The only issue was faced when our baggage failed to turn up in a prompt manner at the airport. There didn’t seem to be anyone who knew what was going on… though this was an issue with the airport, not the airline.

Like most North American airlines, Economy passengers need to pay for any checked baggage. It’s become a bit of a pain over the years, but luckily you are able to pre-pay when you check in online. You can get all the details on that side of things here: https://www.aircanada.com/en/travelinfo/airport/baggage/checked.html

Toronto Pearson definitely had some explaining to do though after making us wait well over an hour for our bags to be delivered, with little to no communication. On the plus side, I met Russell Peters, who had been on our flight.

Hot Tip: Though it wasn’t available when I was in Toronto, the Pearson International Airport now has an express train that runs to Union Station in the centre of town. Read more about that HERE. If there are two or more of you travelling, however, a taxi is likely to be as expensive or about the same. Taxis seem to operate to set costs depending on where you are heading.

The writer flew at his own expense in May 2015.