When boarding a long haul flight, there are few greater moments of jealously one experiences than seeing someone in business class enjoying a glass of champagne on a seat that you know lies flat and ensures no one is going to be climbing over you for the entire duration of the flight. Well, last month I was lucky enough to get an upgrade on one of the world’s longest routes, from Vancouver (Canada) to Sydney, and experience the luxury for myself. So, has that jealously been warranted? Let’s find out:

Being one of the last flights out of Vancouver International Airport meant that facilities were limited by the time we lined up for our flight. Only one counter was open for bag drop for all classes, but even with a lengthy queue, it moved quickly thanks to most of Air Canada’s processes – bar the bag drop – being self-serviced. Departing around Midnight, you would think that that would be the absolute last flight out of the airport – but in fact Vancouver International had scheduled flights through the Asian region right through to 2.20am.

I moved through customs in a matter of minutes and headed straight for the Maple Leaf lounge. The lounge is a comfortable one, with self-service drinks and food. As we approached midnight – and what was Air Canada’s final flight for the day – the food was slowly taken away, but there were plenty of options through most of our stay in the lounge, from soups and salads to fresh hot and cold food options. The internet was fast and announcements were regularly made as the flight prepared for departure.

In business class, you’re permitted two bags up to 32kg. For other class allowances, head to the baggage information page on their official website: http://www.aircanada.com/en/travelinfo/airport/baggage/index.html

In Flight Experience and Comfort:

The 777 is a fantastic plane, and more often than not will provide you with a very pleasant flight. This route was no exception. It was a smooth flight, the crew couldn’t have been more accommodating and the “Classic Pods” that make up their 1-2-1 Business Class layout are phenomenal, with aisle access for all guests.

The seat can be moved a million different ways thanks to the seat controls. You do need to play around with all the buttons to work out what they do, but once you get the hang of it you can put the legs up, you can move the headrest and you get get it to just the right angle so you can get as comfortable as possible, while still being able to put your tray table down and watch a film on the 12 inch entertainment unit… there’s even a massage function with lumbar suport!

Laying out flat it’s 191 cm long (53 cm wide), which will suit the vast majority, ensuring a comfortable nights sleep. A duvet/doona is supplied with the pillow and seems to be well suited for the temperature on the plane. I was perfectly comfortable. The well engineered seat belt also ensures you are tucked in – but it never gets in the way of your comfort. So yes – this is a seat to get jealous about. This is going to sound terrible – but the only downside to being so comfortable in your slumber is that it keeps you from enjoying some of the other benefits of the Business Class experience (talk about first world problems). 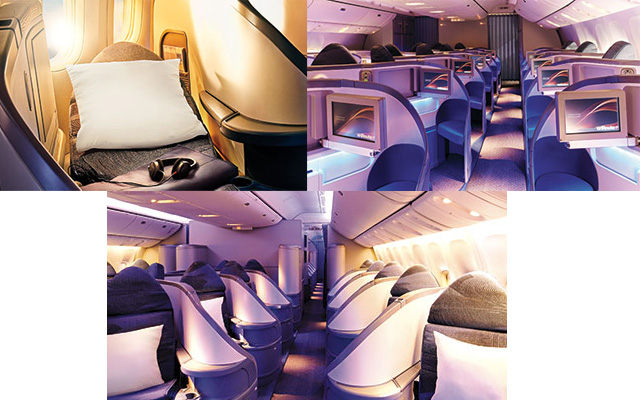 The only real downside to sitting in Business Class is that the TV as to be stowed on take off or landing – which at some airports can take a while. But when you’re in store for a 15 hour flight, it’s hardly an issue. The pods come complete with comfortable, over ear noise-cancelling headphones which are built into the unit, though you are able to use your own headphones through a single jack input if you desire. The 30 cm (12″) touch screens are responsive and filled with hundreds of hours of films and TV shows. The Air Canada collection isn’t the best offered in the air, but it’s more than enough to fill the flight time – with plenty of room for a good sleep in the middle.

Once seated, a champagne or orange juice was offered, as is tradition. They also provided menus for first drinks and the main course, which given the lateness of the flight they made every effort to serve quickly after take off.

I had the Chicken Briyani as the main for dinner, which was served with a selection of warm bread rolls, an ahi tuna appetizer, mixed green salads, a selection of cheeses, fruits and a dessert of a tuxedo cake with chocolate buttercream. It was more than you possibly need after eating in the lounge, so if you didn’t want the main served immediately you could request it later in the flight, and there were additional options between the two main meals. This included ice cream, hot noodle soup, chicken skewers, dim sum selection and more. After I slept, I ordered some of the dim sum – a selection of surprisingly good dumplings with soy sauce and chili – and had a cup of tea. The food was prepared as I asked for it and took less than ten minutes. They sent over some ginger snaps while I waited.

While four options were served with the Dinner – Salmon, Vegetarian Risotto and Beef options in addition to the Chicken I enjoyed – there were three for breakfast. Pancakes, Chicken Breast or an Omelette. I enjoyed the last option, which was served with cottage cheese, red pepper relish, roasted redskin potatoes and chicken sausage. A warm croissant, yogurt, fruit, juices and teas were served with the main course. As you can see in the photo above, the dishes were well presented with cutlery, plates, salt, pepper, condiments and everything you needed. A fantastic in flight dining experience all around.

Air Canada provide excellent customer service for all classes, and I experienced nothing but that for the entire flight, as well as on ground. It’s to be expected in the upper classes but still worth commending them on. They made sure I was comfortable for the entire flight, and that both arrival and departure were as painless as possible.

With an Australian passport, I was through customs within minutes at Sydney Airport. The bags came out quickly and an express pass (which really wasn’t needed at the time of arrival) pushed me into the arrivals area in record time. Interestingly, there was a slight delay on arrival as they sprayed the plane with insecticide, which isn’t something I’ve experienced outside of Asian flights.

To put it in a word, the Air Canada Business Class experience is one of comfort. They don’t have the flashy celebrity chef menus that some of the other airlines boast about, and they’re not trying to pretend they’re anything they’re not. You’re on a plane, and you’re stuck on that plane for over 15 hours. But with fantastic service and a great experience – not to mention one of the best sleeps I’ve ever had on a plane – it is, indeed, as comfortable a 15 hours you could have flying across the Pacific Ocean. And to answer the earlier question – yes, the jealousy was certainly warranted.

Boarding a flight like this with a Business Class ticket isn’t always about spending the money, airlines provide options – especially for frequent flyers – that allow you to to upgrade your ticket using points. For a 15+ hour flight like this, there are few better ways to spend them… You can find out more about all Air Canada’s upgrade options here: http://www.aircanada.com/en/travelinfo/before/upgrades_index.html

Air Canada flies daily from Sydney to Vancouver and back again on their 777-200LR fleet, with new flights from Brisbane to Vancouver launching on their new Boeing 787 services in June 2016. For tickets, the latest fares and more details, head to: http://www.aircanada.com/