Eating with the AU: Marly Kitchen – The Marlborough Hotel (Newtown)

Everyone wants tacos. Tacos tacos tacos. It’s the pub food craze that has turned places like the Norfolk in Sydney into a must go destination (especially on Taco Tuesdays!). They followed a similar objective with the relaunched Abercrombie and even the Newtown Hotel, while the old Excelsior is making a killing as the rebranded Mexican bar El Loco.

So, when The Marlborough Hotel reopened earlier this year with the “Marly Kitchen”, one might have expected tacos to be a feature of their menu, too. Thankfully their was chef, responsible for much of the aforementioned taco craze at his previous bars, has had enough. After all, tacos are so 2012. In its place he is introducing trendy Sydneysiders to a potential new craze: waffles. And a welcome treat it is indeed.

Like the other bars mentioned earlier and their tacos, the signature waffle is in no way the only part of the Marly Kitchen’s incredibly extensive venue, which combines contemporary Australian pub cuisine, with variations of American classics, all with a focus on serving the best quality food possible. You’ll pay a few more dollars here than at other nearby pubs as a result, but the quality of the food speaks for itself. 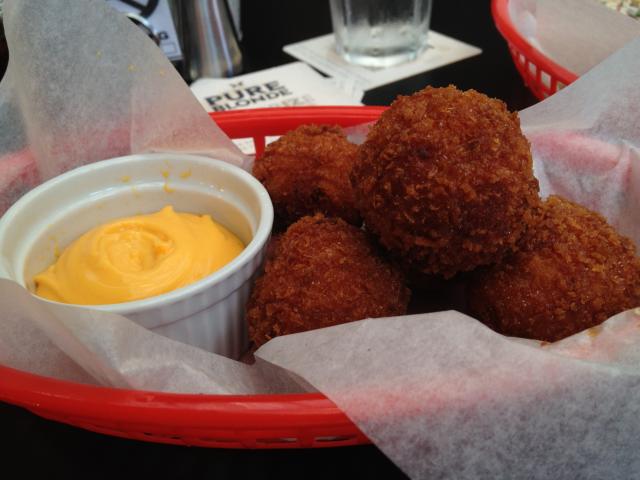 We enjoyed a variety from the menu, starting things off with the “Chicken Parma Poppers” ($12), which were a big hit on opening night. The “poppers” – which visually resemble the sorts of risotto balls popular at events – are jam packed full of a ham, chicken and tomato, and served with a cheesy dipping sauce. It’s far from the healthiest option on the menu, though it’s something your taste buds will thank you for. In the portion we received, ham was the most pronounced part of the unique dish – so fans of the meat will be very much at home here, though there is plenty else going on to keep it true to its name! 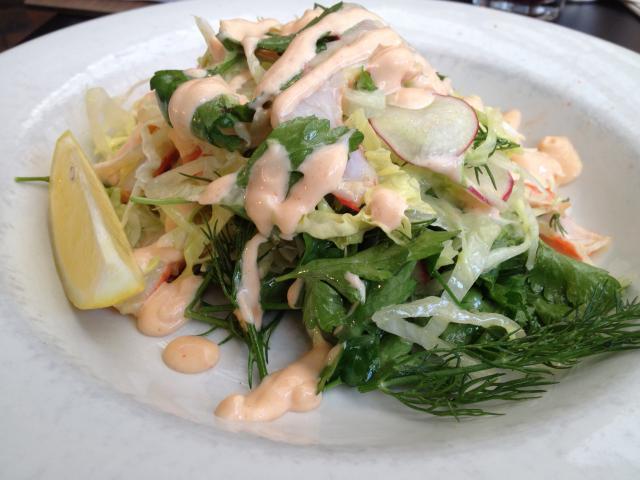 Those after a salad option should look no further than the inspired Prawn Cocktail salad ($19). Over a healthy amount of juicy and refreshing iceberg lettuce, features fennel, red radish and wiltof, with lemon vinaigrette and bloody mary cocktail sauce. Oh, and let’s not forget the generous helping of king prawns mixed in. You’re not going to be disappointed with this dish – it’s exactly as the name suggests and more; with the bloody mary cocktail sauce being a nice variation on the traditional you might find at a RSL, while the fennel and radishes round it out perfectly. 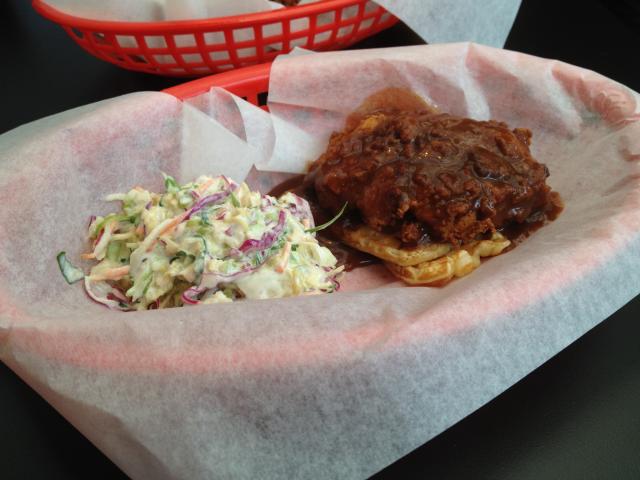 But it was the waffles we were most excited about, and we were treated to two of the $8 treats, each accompanied by pickled apple slaw (better than any coleslaw you’re likely to have ever tasted) and red eye gravy. Pictured above is Mamma’s Chicken, featuring buttermilk fried chicken, with plenty of spice thrown in for good measure. With fried chicken places becoming a trend of themselves around Sydney at the moment (look no further than Mary’s just up the road), this is a fairly straight forward dish – does it even get more American then Fried Chicken and Waffles!? – but done well, and definitely the “must have” item on the menu. A perfect piece of fried chicken if there ever was one. 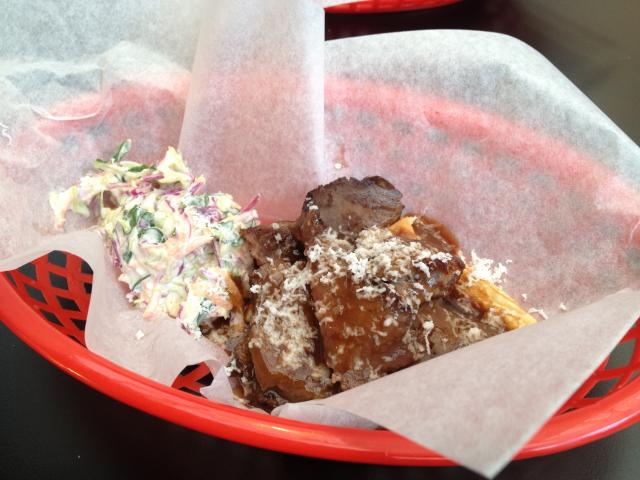 At $8 a pop, and small but reasonable in size, it’s recommended to get yourself a few of these treats, and the “Philly Cheese Experiment” was the second waffle we were able to taste – with the two other dishes, a pulled pork and a vegetarian option featuring sweet potato and lentils, left on the menu for our next visit. With the dish featuring shaved BBQ sirloin, this was an experiment indeed; a variation on the classic Philly Cheese Steak. They don’t quite pull it off, with not enough of the queso fresco in our serving to challenge the classic North Eastern American treat, though it nonetheless comes recommended with some mouthwatering beef serving as the feature of the dish. 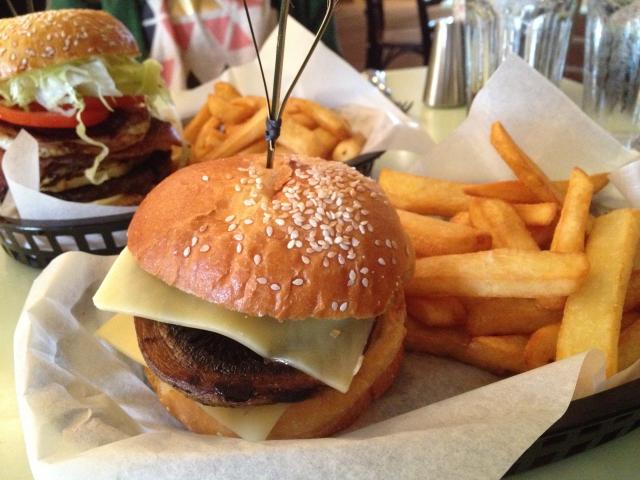 Doing burgers well is a must of any pub menu, and the Marly Kitchen offers no less than SEVEN options for your taste buds to enjoy, starting at $14 for the Mushroom Cheeseburger (pictured above) and running to $19 for the Beef Burger with the lot (pictured below), all served with chips. The mushroom cheeseburger is a highlight of the menu, with a massive roasted portobello mushroom (or two), covered in cheese, pickles, ketchup, mustard and their delicious “burger sauce”. It’s a fantastic vegetarian option and a take on the traditional American cheeseburger. The beef burger with the lot, meanwhile, is a mammoth beast to take on, covered in fried egg, bacon, beetroot, caramelized pineapple (a highlight of the mountain of food), cheddar cheese, tomato, iceberg lettuce, tomato sauce and bush pepper mayonnaise (delcious!). Served with a healthy portion of perfectly cooked thick chips, this is one burger any carnivore should enjoy – and one that left this reviewer extremely stuffed and satisfied. 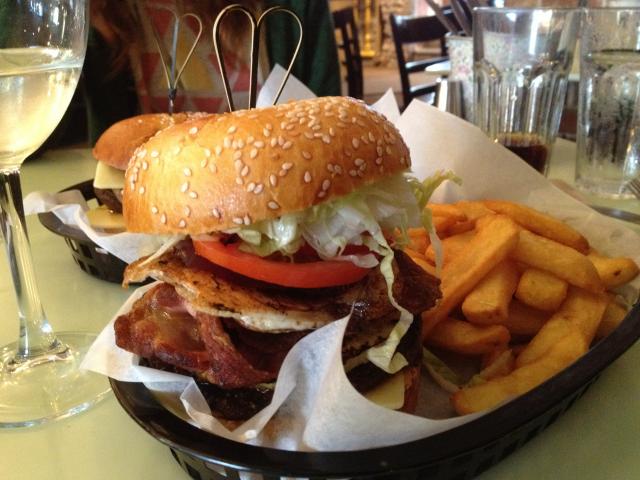 In spite of the comments earlier in the article, they do serve tacos at the Marly Kitchen, with tacos and quesadillas being served from 10pm to 4am on Friday and Saturday nights. A fantastic idea for some late night cuisine, though the head chef has asked an external vendor to take care of this side of things. He genuinely meant it when he said he’d had enough of tacos. But you know what they say… You might be able to take a man out of a taco, but you can never take a taco out of a man. That’s a saying isn’t it? Maybe we should have thrown in something about Waffles too…

The Marly Kitchen is part of The Hotel Marlbourough on the corner of King and Missenden Road, and serves food Monday to Sunday, from 12noon to 10pm. A special Mexican menu is served from 10pm to 4am on Fridays and Saturday nights. They serve $10 burgers on Mondays, $15 Schnitzels and Parmas on Tuesdays and Waffle Wednesday serves their signature dish at half price – just $4; bring on the students! Also look out for their $12.50 lunch specials, served until 3pm on a weekday.