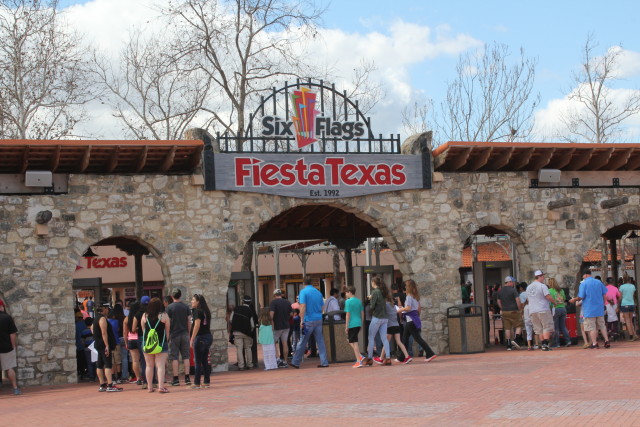 I’ve always been fascinated by Theme Parks, especially in America. The stories of how the parks originated and have since grown and thrived is often as interesting as the rides themselves. Six Flags: Fiesta Texas, located just outside of San Antonio, is no exception, with the origins of the park dating back some 25 years, and the topography of the location – once part of the Beckman quarry which went into operation in the early 1900s – makes for some of the most unique ride architecture you’ll find at any park, anywhere in the world. 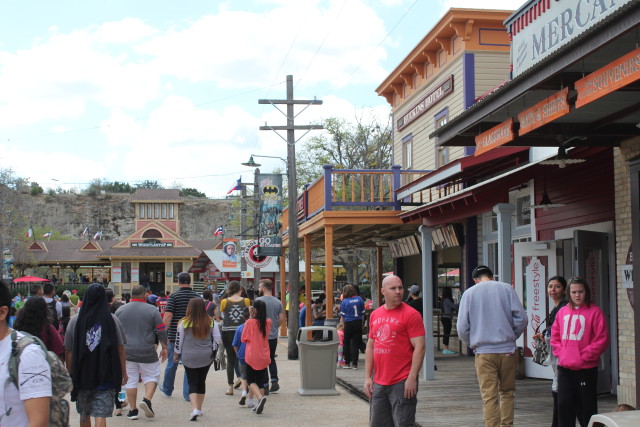 Like most parks, Fiesta Texas is separated into different sections with various themes…

The park was first opened in 1992 not as a “ride” park, but as “Fiesta Texas”, which was designed to focus on showcases of the music and culture of the region – though the iconic wooden coaster, the “Rattler”, which was the tallest and fastest wooden coaster in the world at the time, did open with the park. Remnants of its origins continue to litter Fiesta, but many of these stages and amphitheaters have been replaced by roller coasters by the Six Flags chain who took over in 1996. This is alongside a variety of other attractions, from a splattering of kids and family friendly rides, to carnival fodder to take home those stuffed animals and Batman merchandise you’ve always wanted. Even the Rattler has been gutted to make way for the superior Iron Rattler. There’s also a massive hall for food, which shows classic and current WB cartoons. Nothing wrong with some pizza, BBQ and Looney Tunes between rides, eh? 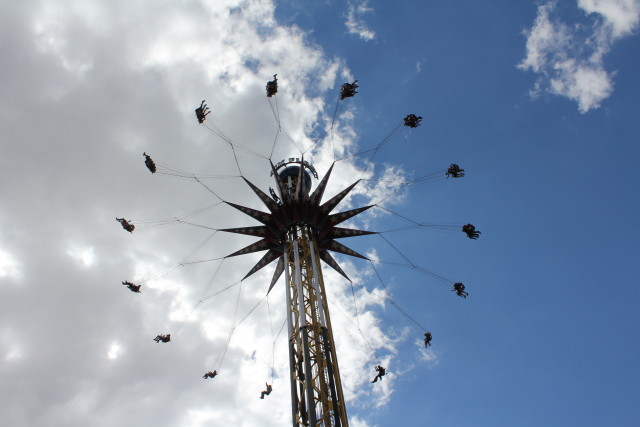 Limited by space yet enhanced by its own terrain, it’s hard to argue there’s any filler in the now roller coaster focused park, with 8 massive coasters to choose from. Every ride has something of its own design to offer and no two experiences are the same – something that Six Flags have always tried to offer at their parks, though haven’t always achieved. The two highlights of the park are the ones that, perhaps unsurprisingly, make the best use of the landscape – the quarry walls that line its perimeter. Their Superman Ride, Krypton Coaster, is a floorless coaster that, at 4,025 ft, is one of the longer rides around. And with speeds of 110 km/h, it ties with the Iron Rattler for the fastest in the park. Starting off with what was the largest vertical loop in the world until 2013, the incredibly smooth coaster – which recently got a freshening up in celebration of its 15th anniversary – is literally built into the quarry walls, sending you flying up, over and around the space. This makes for some unique angles, drops and design. It’s a ride you won’t want to go on just once. 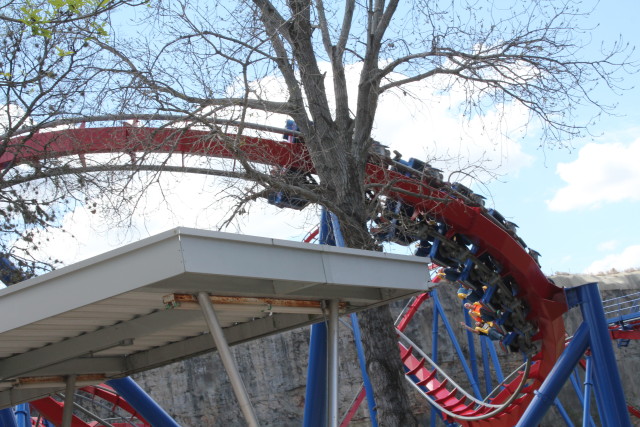 You can see the quarry wall in the background, as the Superman ride takes a turn…

And then there’s the park’s most iconic structure: The Iron Rattler, a brand new iron coaster built into the park’s oldest coaster, The Rattler – a classic wooden coaster by any sense of the mark. But after it had started getting a reputation for being a little too Rattly for its own good, it underwent an overhaul, transformed into the hybrid Iron Rattler and now delivers one of the most impressive ride designs you’ll find anywhere in the world. Built into the quarry walls just like the Superman coaster, the very design of the ride does one thing particular interesting: from the outside, it just about hides all of its most exciting features. Corkscrews, the turns down the near vertical drop, a ride through a pitch black tunnel and a unique barrel roll – the first of its kind, I’m told. 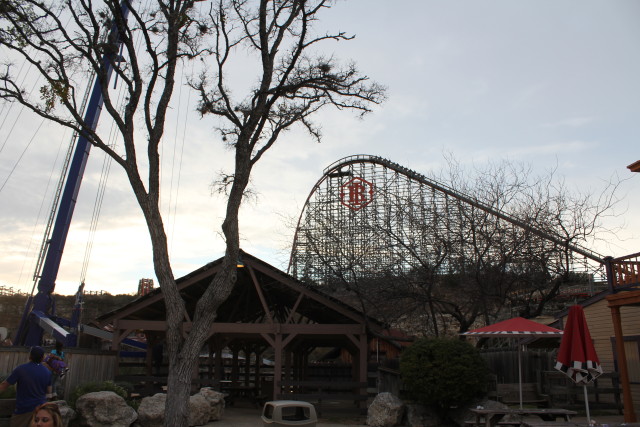 The first drop of the Iron Rattler is 52m high and is at an angle of 81 degress.

There is no telling what’s coming next, whether you’re on the ride or watching from the sidelines. Add in the typical wooden coaster cart – which is modelled as a rattlesnake, naturally – is the sort that gives you that slight impression that you might just fall out, helping add to the experience as one of the most adrenalin pumping, ridiculously fun coasters I’ve ever been on. To be completely honest, it’s worth the trip alone. 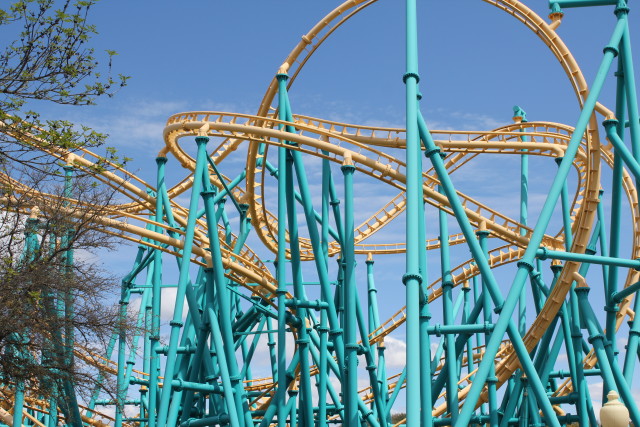 Signalling these two coasters out is an easy one, but in reality you’re going to enjoy everything the park has to offer. There’s Poltergeist, a seated coaster that looks like a roller coaster designers wet dream (the sort they designed when they were 10 years old, naturally). Loop within loop within corkscrew, it looks like the sort or crazy design that one wouldn’t dare build in Rollercoaster Tycoon, yet here it is, and from the time is shoots you off down the track to the time it takes you to the exit, it’s a blast. Another ride sees your coaster cart move in circles like the Teacups at Disneyland as you traverse the track. Originally a Tony Hawk themed ride, it now calls itself Pandemonium. The Goliath is another park favourite, though a fairly standard suspended coaster having been salvaged from the Batman ride at the Katrina ravaged Six Flags New Orleans, and the Boomerang: Coast to Coaster is much the same as you’d experience in any Boomerang ride around the world. 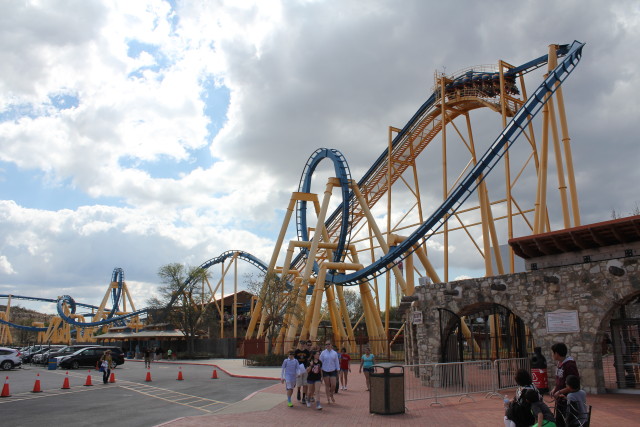 Goliath, a brand that exists at many Six Flags parks, is the first ride you see at the park entrance.

A couple of months after I left, the park unveiled a Batman ride of its own to add to its DC arsenal, bringing the total number of coasters to 9. The ride, which rises vertically and has one of the most unique designs I’ve seen since that BuzzSaw ride at Dreamworld on the Gold Coast, promises a “4D experience”. The ride suspends riders on the exterior of the track (much like the famed X2 at Six Flags Magic Mountain in California; a personal favourite), giving developers the chance to make full use of their limited space by controlling every movement you make along the track. It’s sure to be an interesting experience, and given the fun I had today, you can bet I’ll be back again to try it out. 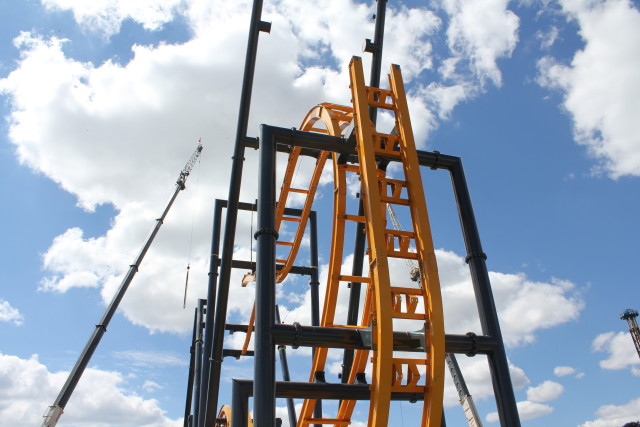 The new 4D Batman Ride: A work in progress at the time we attended the park (it’s now open).

Six Flags Fiesta Texas is located a 25 minute drive from the San Antonio city centre, and about 1 hour 40 minutes from Austin, Texas. Southwest fly to San Antonio and Austin direct daily from LAX, making for easy connections for Australian travellers. For more details on the park including their operating hours and their free water park, head to their official website: https://www.sixflags.com/fiestatexas

This visit was made possible thanks to Six Flags Fiesta Texas as well as the support of the San Antonio Convention & Visitors Bureau and Texas Tourism.