The Playbar and Playbase are no longer the top-of-the-line offers for Sonos’ multi-room prowess. The pinnacle of transforming your TVs sound with Dolby Atmos and high-fidelity audio is now the Sonos Arc. And what a soundbar it is.

Sonos took their time getting into the Dolby Atmos game while competitors would breeze past time. It’s clear they were just watching, observing, and waiting for the right moment to unleash this jaw-dropping beast, which is genuinely the best soundbar I’ve come across, and a true five-star device to round out that home cinema every smart home deserves.

The Sonos Arc is one of our top gift suggestions for Christmas 2020. For the full gift guide click here 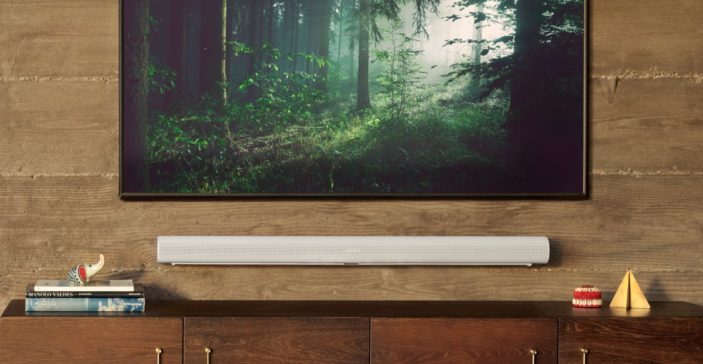 This is the same slick one-note that characterises all over Sonos devices. Available in either white or black, it looks attractive enough to fit seamlessly into any design scheme, much like the Sonos Move and Sonos One speakers that can be used to augment the arc and create a more fleshed out surround-sound experience.

With all the right curves, it’s a simplistic 1m long cylinder build that feels tight and compact enough to fit well in front of any low-profile TV. Currently I have it in front of an LG CX, which is not ideal since the TV’s stand is fairly low. Many other soundbars would be just chunky enough to obtrude on the very bottom of the TV, but thankfully the Arc keeps its head down, curved specifically to avoid such a messy situation.

The matte metal mesh that wraps around the soundbar is fashionable, recessed around the back for the connection button and ethernet port. And, in small alcoves hidden on either side, ports for HDMI and the power cable. It’s a clean, seamless design that hides 11 Class D digital amplifiers and 11 custom drivers, separated into eight elliptical woofers and three tweeters. All are smartly positioned for optimal performance and precision audio. It’s the exact set-up you’d want to mirror the soundfield of a more advanced surround sound system without actually having any other speakers connected.

Four of the woofers are front-facing, there’s one on either end, and two that are upwards-firing. As far as tweeters go, there’s one front and centre of the Arc, and two that are more directional, one to the left, one to the right. It’s a smart, Atmos-specific set-up, and as I’ll discuss below, does the job exactly right. That is, it bounces audio off the various walls of whatever room you’ve placed it in, aiming for a true 3D audio experience.

There’s just one LED light on top, simply to indicate when the soundbar is on or when the built-in Google Assistant and Amazon Alexa is awaiting command. Volume controls and play/pause are here as well, not physical but incredibly responsive to touch – as you’d expect.

The bar is 114cm wide, which is more than the Playbar’s 90cm. Still, it fits nicely in front of any TV 55-inches and up. And if you’re wall-mounting, it’s the arc is smart enough to optimise itself based on orientation.

Set up is incredibly simple using the Sonos app. Although it seems only iOS users can take advantage of Sonos’ impressive TruePlay set-up, which orientates the sound exactly as a function of where you’ve placed it, and requires you to do a bit of waving and walking around the truly stretch the sound out. The adaptive soundscape tool has been used in Sonos speakers for a while now, and – when I had an iPhone – was always impressive, and fast. 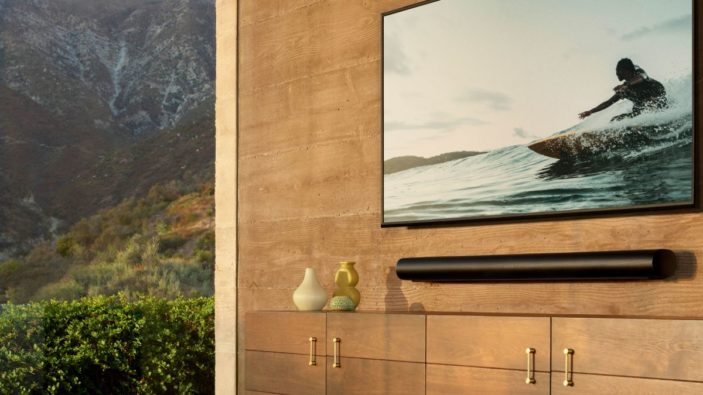 Performance will largely depend on the shape of your room, but at least the Arc does its best at adjusting as a function of the various textures it detects during the set-up process. And you want this to be optimised, because the speaker array is simply the best at pushing sound around a room more efficiently and evenly than your standard TV speakers (or even the standard soundbar).

There’s an impressive level of clarity, solid bass response, and a beautiful balance in the higher frequencies. In fact, the higher frequencies are pushed forward just enough that they don’t topple the bass, keeping vocals front and centre and allowing you to hear more distant details in exactly the spot they were intended for. It’s a wide soundstage, and nuanced enough to show plenty of detail and precision across that spectrum.

Dolby Atmos separates sounds into object based audio so you can precisely feel where a sound is coming from in an audio track, like in the cinema. The Sonos Arc is the clearest expression of this that I’ve ever heard. While it’s bouncing sounds all around you, even without assisting speakers, the Arc successfully takes a source’s sound and elevates it for a substantial home theatre experience.

Although you’re probably going to want to add more speakers to the mix. If you’ve got a pair of Sonos One speakers, and a Sonos Move, that’s most ideal. What you’d get is not just richer surround sound, but more clarity at peak volume and a stronger, weightier bass response. As a standalone, you won’t want to push the Arc past 70% – the high-end just becomes too much to handle.

I also like how the Arc is smart enough to become one with your TV once its connected (preferably via an eARC port). There’s no separate remote that you’re using to control the volume (giving you another thing to misplace), but instead the Arc can be controlled by your TV remote (or the Sonos app).

Listening to music is equally impressive on this thing. Doubly so now that Sonos have their own radio-streaming service, with exclusive content like playlists curated by artists like Thom Yorke. Although again, you are not going to want to go above 70% volume if you’re only using the Arc as a standalone speaker.

If you want the Sonos Arc, you’re looking at a price tag of $1,399. And really, that’s not bad for what you’re getting here. It’s far from the most expensive Dolby Atmos soundbar on the market, and it just may be the best (I haven’t tested the highly acclaimed Sennheiser Ambeo). That being said, you’ll need to have your other devices fully specc’d if you want to get the most out of the performance. With HDMI 2.1 (hence, eARC – uncompressed Dolby Atmos) being limited to only a few TVs at the moment, the Arc then represents more consideration than just buying one and hoping for the best.

You’re ideally going to be using the Sonos Arc with an LG CX or Sony X90H. If you have anything older than that, you’re still getting a lot of bang for your buck – just not as much.

You also need an iPhone if you’re going to properly calibrate the Arc to suit anything but a straight, no-fuss, square room with minimal furniture. You can always just borrow one though. Once you’ve set it up, it won’t matter if you’ve got an Android controlling the thing.

It’s worth considering the above, because the Sonos Arc at its full potential is genuinely mind-blowing, and is a perfectly articulated case for why Dolby Atmos is the future for home cinema.

Highlights: Simply stunning sound; beautiful design; fits well under a 55-inch+ TV; easy to set up; easy to connect other speakers; clear and precise vocals.
Lowlights: You’d still need specific devices to fully optimise the Arc; not as flexible with orientation as the Playbar; can fall out of balance at max volume.
Manufacturer: Sonos
Price: $1,399
Available: Now

Review based on a Sonos Arc supplied by Sonos.