Sonos One SL Review: An essential piece of a larger jigsaw 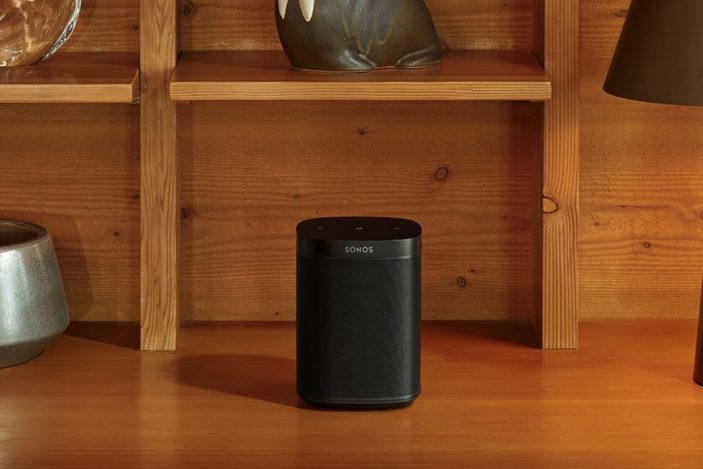 Although it was released three years ago, the Sonos One is still a remarkable mid-size smart speaker. Released on 2017, it quickly became the must-have audio device for smart homes, with scarily accurate far-field microphones providing a seamless and revelatory experience with any of the big three voice assistants.

Did it sound good? This is Sonos we’re talking about, but even though audio quality was of no concern to begin with, performance still managed to surpass expectations. This highly attractive, relatively small speaker could easily fill a room with crisp, clear tones and thick, robust bass. Despite all the smart speakers that have been released since, the Sonos One still sits near the top.

That repute shot even higher as the Sonos One was warped into Gen II with the introduction of Bluetooth Low Energy, more memory and a speedier processor. Now, the Sonos One SL is pretty much the same thing but with one enormous design difference, denoted by the “SL” which means “Speechless”. Yep, there’s no microphone array now, so those dozens of tiny dots circling the outer edges of the speaker’s top panel are no longer there. It’s a Sonos One, without any voice control whatsoever.

And that’s a very smart move from Sonos. In a huge nod to stereo pairing, the team simply streamlined the experience for those who don’t really need another voice-controlled device.

Whether it’s out of privacy concerns, a general apathy towards voice assistants, or just not needing another one, the SL is a necessary piece of a much larger jigsaw. That is, if you’re building a Sonos ecosystem and you’ve got something like a Beam, plan on getting the Arc, or just have a Sonos One already, the SL fits beautifully into your home’s audio environment.

Literally nothing has changed here other than the removal of the microphones. In either a matte white or black, this sleek and compact body has been carefully engineered to slide in seamlessly with any contemporary design scheme. The aesthetic is subtle and harmonious, playing off the monochromatic finish with few subtle features like a barely-there Sonos logo and firm capacitive touch controls on the top for play/pause, volume, and skip track functions. Aside from that, a restrained LED light is there to indicate the SL’s current network status. It’s simple, it works, and Sonos are right to go with the “if it ain’t broke” approach.

Any audio streamed over a connected device on the same Wi-Fi network comes through beautifully thanks to two Class-D digital amps, one mid-woofer and one tweeter. What’s underneath the hood remains untouched.

The set up is consistent in producing these really grand soundstages, shooting off multi-directional sound that’s perfect across genres. Soul artists like Sam Cooke and Marvin Gaye shine with clean, detailed vocals; hip hop levels up with deep, resonate drums and pounding basslines, without distorting even at the higher volumes; indie rock benefits from crystal clear separation, picking apart instruments so you can hear the ever-important nuances. It’s the exact same polished, sophisticated audio profile that you get from the Sonos One.

Compatibility with Apple Airplay 2 works seamlessly with no noticeable connectivity issues. Other devices rely on the Wi-Fi, as the One SL doesn’t support Bluetooth streaming. All works well, especially if you’ve sharpened the subtle details with the impressively easy-to-use Trueplay. That’s the set-up process for the SL, as it is with the other Sonos One devices; acoustically tuning the device as a function of whatever room you have put it in. You simply use the app to run through a pleasant introductory process, which tests audio by transmitting these dynamic pulse-like sounds to your smartphone, curating an acoustic profile that’s specific to the speaker’s environment by measuring how sound waves bounce off nearby environmental features (like furniture, walls).

Sonos One SL is most at use when its playing with other Sonos devices. Disappointingly, you can’t pair this with a Play:1, but you can use the SL the stereo-pair with a Sonos One, assuming you already own one. This is beneficial because you only need one voice-activated smart speaker in the ecosystem, then the SL might as well have a microphone itself.

When the Sonos Arc comes out, it’ll be handy having two of these types of speakers so they can be used to round out your home cinema. These are small enough to be placed neatly on shelves and the like, giving you a lot of flexibility when it comes to building a larger sound environment without having to obtrude on any design scheme.

At A$269, the SL is well-priced, albeit only slightly cheaper compared to the A$299 Sonos One. The small price bump represents a modest saving if you’re going for the stereo pair, but its still a saving. And it’s easy to justify shelling out less than $300 to make any home-cinema set-up significantly better.

It’d be hard to find a smart speaker released in the past few years that isn’t placing a huge emphasis on voice control. For those who don’t really care for such a thing, the SL just makes perfect sense.

Highlights: Incredible sound that stands up with many modern speakers in the same price range; easy to set up and use; plays well as part of a larger ecosystem; the perfect choice for those who want to avoid always-on voice assistants.
Lowlights: Not compatible with older models like the Play:1; not wireless, so you will need more sockets available than you might be comfortable with, if the SL is part of a larger system.
Manufacturer: Sonos
Price: A$269
Available: Now

Review based on a unit supplied by Sonos.