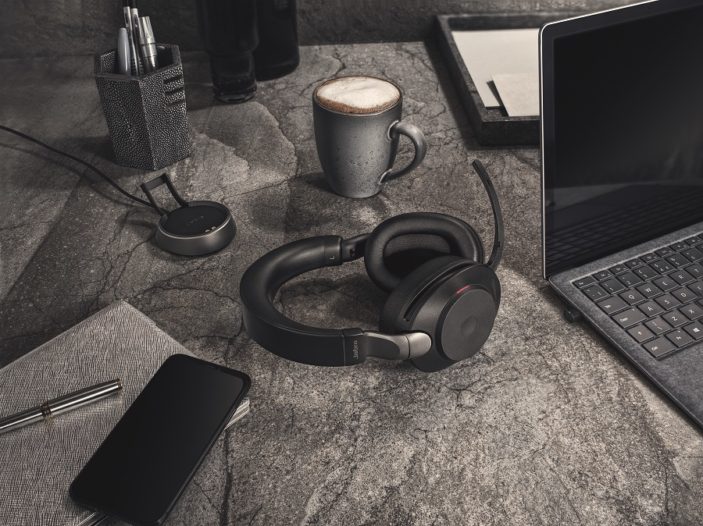 Not content with dominating the market for sports earbuds, Jabra has gone and put out what is easily one of – if not the – best business-minded pair of headphones of 2020.

That’s no surprise given that the company isn’t at all new to this game, and their previous noise-cancelling enterprise headsets have received plenty of well-deserved praise. But Jabra has made the Evolve2 85 a significant and elegant step up from preceding models, packing in enough features and landing on a design that better balances business and lifestyle use. 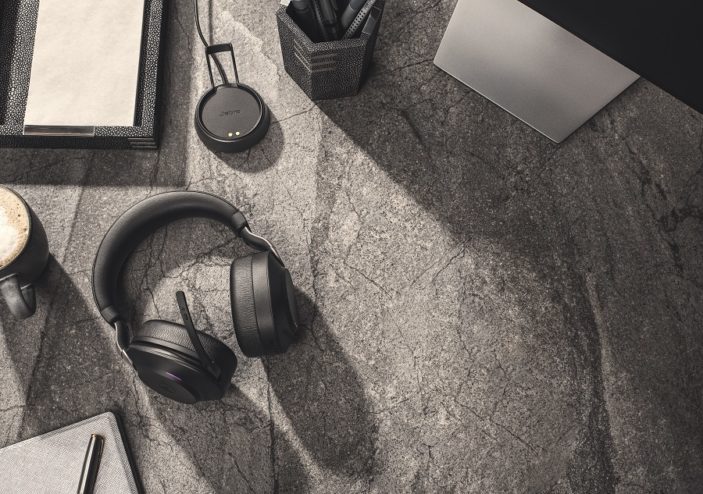 Representing the top tier of Jabra’s newest Evolve2 line, these premium cans are built in uncompromising worship of comfort. Consider it a reimagining of the Elite 85h, albeit with a flexible boom mic that can be popped out and twisted towards the mouth from the right earcup, emphasising the sets conference-friendly design.

And having a conference-friendly headset this good, in 2020, is a highly valuable statement from Jabra, who are clearly out to take on the likes of Sony and Bose who have so far been the dominant brands when it comes to ANC wireless headphones.

The set weights in at 286g, which isn’t the most lightweight out there but is still gentle enough to avoid placing any pressure on the head. This is, after all, a device that lives or dies on providing comfort over long working sessions. And it does so with confidence thanks to a flexible clamp and two large ear cups kitted with soft leather-like material and memory foam, which also extend to the soft headband. They sit at a really comfortable, wide angle so that they are secure while not feeling obtrusive on the head.

The soft matte black finish completes the look, although the set is more varied in its aesthetic than, for example, the seamless and slick Sony WH-1000XM4.

The majority of physical buttons run the edge of the left cup, which is where you’ll also find the 3.5mm audio port and USB-C (there’s also a USB-A model, or just and adaptor) charging port. These control most of the functionality one would need through the day, while the clean and intuitive Jabra smartphone app handles the rest, as well as fully customisable EQ. Although they aren’t as centrally placed as the ports, the left cup hosts a button to toggle between ANC and HearThrough mode to quickly shift mode. There’s also the power switch, which doubles as the Bluetooth pairing button.

Over on the right earcup you’ve got the typical playback and volume buttons, while answering or rejecting calls relies on the Microsoft Teams (assuming you have that model) logo on the outside of the set.

Another neat feature are two indicator lights which signal to someone on the other end of a video conference that you are on an active call, saving you the trouble to let people know every time you’ve been buzzed.

The flexible boom mic is the perfect size, fitting nicely into the right ear cup and easy to pull down and twist whenever needed. Inserting it back into its little groove also doubles as a mute function, while lowering it back down does the opposite. Although there’s also a button on the arm so you can quickly turn the mic off on calls, as well as one to summon your chosen smart assistant.

Jabra has been incredibly generous in terms of functionality, and quick access to those functions, managing to stuff a lot of convenient on-board controls onto the set without making it feel overly cluttered.

The Evolve2 85 comes with a zippered, hard-shell carry case for protection on the typical commute to and from work. It’s durable, nicely designed and relatively slim to fit well into any backpack.

You’re relying on Bluetooth 5.0 here, so it’s safe to expect a nice and stable connection with generous distance. Support for A2DP, AVRCP, HFP, HSP, PBAP, and SPP should keep any issues from arising. On my test, there were no problems with sustaining a strong and in-sync connection during video calls, and accessing my phone’s contact list whenever I needed.

I would have liked to see aptX support though, better rounding this set and widening for streaming videos and playing games. As it stands, the Evolve2 85 is more concerned with the office than your living room.

There’s also a 3.5mm cable included in case you wanted to go wired. 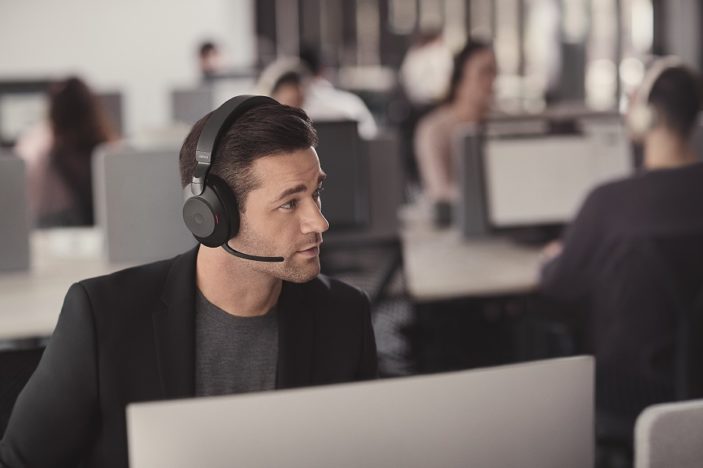 While I have nowhere near the amount of video conferences in my schedule as the average office worker, there’s little to be disappointed in when it comes to making calls on the Evolve2. That boom mic is complemented by no less than 10 built-in microphones, with those on the other end of call hearing voice that sounds much more natural, clearer and sharper than on your average headset.

The sound quality you’ll hear is just as good, albeit not as well-balanced if the boom arm is lowered and the microphone is activated. Though put that little arm back into it’s slot and the Evolve2 85 contends nicely against the likes of Sennheiser, Sony and Bose. It’s never going to be as nuanced as a strictly lifestyle-focused headphone, but it comes close, especially on the vibrant mids and highs.

Noise cancellation helps immensely during calls, but since I hadn’t tested in an actual office environment – where multiple keyboards are being bashed at once – my experience is skewered. While those on conference calls could clearly make out when I was typing, lower frequency sounds were effectively muted.

When streaming music, the ANC is powerful enough to keep you locked into your own listening chamber without external distractions, and HearThrough mode is equally efficient for maintaining situational awareness. Thankfully, the modes are just as nuanced as competing ANC headphones, with a slider on the Jabra app controlling transparency.

Support for multipoint connection is there for those who need to connect the set to two devices at once and easily switch between the two. Although this feature should be expected at this high-end of the price range, and it’s no surprise that Jabra has made sure it works as seamlessly as possible for those who need to juggle their phones and computers throughout the day.

The Evolve2 85 comes in two models, optimised either for Unified Communication or Microsoft Teams, which should influence your decision if you’re a particularly intensive user of the latter. If choosing the Teams model, you can expect better integration into Microsoft’s business platform like instantly bringing up the client, a dedicated Teams button, and opening the platform’s voicemail screen. Of course, the functionality just ups convenience, but for those who need it, it’s a nice extra layer that adds value.

Jabra has gone for gold when it comes to battery life, packing the Evolve2 85 with enough juice to last 37-hours on a single charge. That’s substantial, even when compared to industry-leaving lifestyle headphones. Fast-charge only adds to this, giving you around 4 hours of battery life in less than 10 minutes.

That aforementioned docking station then starts to look much more attractive considering how easy it would be to quickly recharge the set before a call, regardless of whether you’ve juiced it up overnight or not. I wasn’t able to get hands-on with one of the docking stations so can’t comment any further.

Jabra must have known that they faced stiff competition from consumers who may already have flocked to lifestyle headphones and just use those in the office. So what they’ve obviously done to justify the price tag is be as generous as possible, designing the Evolve2 85 with not just exceptional comfort in mind, but sheer convenience.

The on-board functionality is outstanding, and makes the headset that much more flexible for those who are working in fast-paced environments who want that kind of quick navigation. The partnership with Microsoft Teams only takes that further for those who are already in that work environment, but even for those who aren’t, the Evolve2 85 is a beast of a companion in the office (whether that’s a noisy office, or a home office).

Highlights: Easy access to all functions at all times; seamless multipoint connectivity; powerful ANC; picks up clear and sharp voice; 10 built-in mics; boom arm is flexible and has light indicators to signal status to others; just as viable for listening to music on the daily commute; outstanding battery life and fast-charging; exceptionally comfortable for long working sessions.
Lowlights: No aptX; still quite expensive.
Manufacturer: Jabra
Price: A$730
Available: Now